Six of The Best: An opinion poll on Unity: Standing with Palestinians

Six of The Best.

I’m reading Colin Broderick’s ‘That’s That,’ an evocative account of growing up in Altnamuskin in Tyrone at the height of the conflict. Colin’s mother and her efforts to protect her brood are at the heart of this story. Her ‘That’s That’ as she lays down the law and the final words in any dispute with young Colin, gives this book its title.

In one little cameo Colin tells of getting ‘slapped’ at school.  He describes the strap as ‘a twenty inch length of thick leather about an inch and a half wide, worn smooth from years of skin contact.’  He goes on to describe how the teacher ordered him to hold his hand out, palm upwards as he struck him forcefully across the hand with the strap.

By coincidence Richard and I were discussing corporal punishment a few days before I read this. I don’t recall how that came into the conversation but that’s the way with conversations between Richard and me. They are inclined to meander. When I read Colin’s account of being slapped I was back again getting called to the front of the class while the teacher fetched his strap from the drawer in his desk and ordered me to extend my hand. Whack. Whack. Two slaps was the normal punishment for messing about in class. One on each hand. Six of the best was reserved for more serious offences like giving cheek to the teacher.

The first slap was always the worst.  There was an initial shock as the strap met your extended palm. Sometimes the leather caught you across the fingers. After that the hand went numb except when the strap caught your thumb. That left your hand stinging and brought tears to your eyes. Some boys cried. I was stubborn. I also didn't get slapped too often. Sometimes a teacher would yank a boy to his feet by grabbing his ear lobe. Or the lock of hair alongside his ear. Some threw objects at boys they suspected of messing about. The  blackboard cleaner with its wooden base was a favourite projectile. So were rulers. Usually made of wood. Sometimes they were used instead of straps.

Managing a class of unruly boys, or girls, is a challenge. Teachers do their best. Nowadays. As well as back in the day. Most of us can name a teacher who made a positive difference in our lives.

When Richard and I were discussing these matters I asked him who supplied the straps. Richard, who was a student teacher, didn't know. He says he never slapped anyone. His incarceration in Long Kesh saved young scholars from that indignity. Saved Richard also?

But who made the straps. Local cobblers? There were local cobblers in those days.  Or were they supplied centrally? Did the Brothers have a special supply? Was there a template? A recommended size, shape or length of strap. Was slapping part of teacher training?  Were young teachers advised on what ‘offences’ warranted slaps? Was there guidance on how many slaps were appropriate?

‘That’s That’: by Colin Broderick, published by BroadwayPaperbacks.com 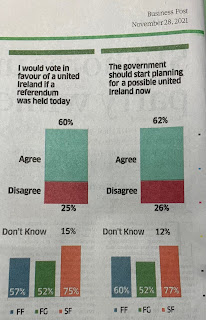 An opinion poll on Unity

Opinion polls are no more than a glimpse into the public mood at a given moment. They can change dramatically and for those who are doing well in party political opinion polls they are no guarantee of success in a future election. That’s why I rarely pay too much heed to them.

Last weekend a Red C poll for the Sunday Business Post looked at public attitudes in the South to the issue of a United Ireland, a Citizen’s Assembly and other matters. For those campaigning for Irish Unity the poll confirms that the debate on unity has increased and is a priority issue for many people.

Despite the refusal of An Taoiseach Micheál Martin to plan for or organise a considered discussion on the issue of unity 60% of people polled are ready to vote in favour of a united Ireland today. 62% also believe that the Irish government should start planning for a united Ireland now. I am not surprised by this. It has consistently been my view that the majority of people in the South are for unity. The details and conditions are a different matter. But most favour an end to partition and self government for the people of the island. That has been my experience.

Micheál Martin has point blank refused to hold a Citizen’s Assembly to discuss the entire myriad of issues that must inevitably be part of any discussion on unity. 65% of those polled believe that it should be established. Other matters such as the flag, the anthem, the place of unionists in a cabinet, the continuation of power sharing in the North in the new Ireland, all point to some of the matters about which there is no clear view.

This is entirely reasonable. Reunification is a big step. Merging two economies; tax systems; health systems; education systems; planning for the environment in the midst of a climate crisis; accommodating the many different views of what the new Ireland should look like and in particular the warm place for unionists within it, are all huge issues that point to the need for dialogue and a willingness to compromise.

Only a planned conversation, involving all of those who wish to participate, can hope to find solutions to these issues. One thing is for sure. We republicans are not about the south taking over the north or vice versa. We are about self determination and a new society, citizen centred and rights based. A genuinely new Ireland based on equality.

The Red C Poll is more evidence that the issue of Irish unity is now front and centre and the Irish government cannot continue to hide from it. 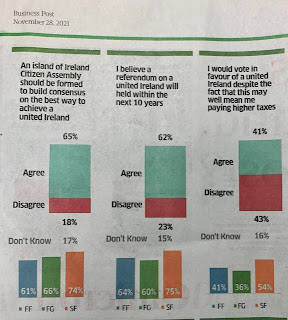 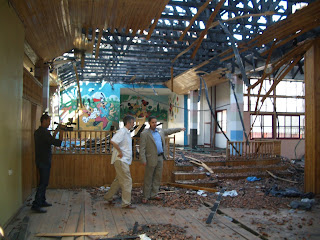 Visiting a hospital bombed by Israel 2009

Monday was International Day of Solidarity with Palestine. Solidarity vigils and demonstrations took place in Belfast, in many other parts of Ireland and around the world. These acts of solidarity are very important. They are a reminder to the Palestinian people that they are not alone. Despite the many governments who continue to shamefully ignore the brutality of the Israeli apartheid system, and the ill-treatment of the Palestinian people, there are millions of people who empathise with and support their efforts to achieve freedom and self-determination.

The challenges facing the Palestinian people are enormous. In April of this year Human Rights Watch published a scathing report on the policies and actions of the Israeli state. In ‘A Threshold Crossed – Israeli Authorities and the Crimes of Apartheid and Persecution’ it became the first major international human rights organisation to accuse Israel of committing the crime of apartheid and of responsibility for crimes against humanity.

It concluded that in its determination to maintain control over the Palestinian people, their land and resources, Israel has ‘dispossessed, confined, forcibly separated, and subjugated Palestinians by virtue of their identity to varying degrees of intensity. In certain areas, as described in this report, these deprivations are so severe that they amount to the crimes against humanity of apartheid and persecution.’

Israel’s response has been to escalate its repression. Two months ago it accused six well known, internationally respected human rights groups, many funded by the United Nations, the European Union and some by the Irish government, of being terrorist organisations. The six organisations are Addameer, which focuses on providing support for the 4650 political prisoners; 500 internees; 160 children held in Israeli prisons and 34 women prisoners.

Other groups impacted are Al-Haq, which has special consultative status with the United Nations Economic and Social Council; the Bisan center for research and development; the Union of Agricultural Work Committees; and the Union of Palestinian Women’s Committees.

The child rights organisation Defense for Children International-Palestine is one of those outlawed. It is part of the Defence for Children International (DCI), an international child-rights movement. As part of DCI it holds consultative status on the United Nations Economic and Social Council, UNICEF, UNESCO, and the Council of Europe. In its work it highlights the continued imprisonment of children by the Israeli authorities. Its’ most recent statistics reveal that 27 children are in solitary confinement; there have been over 70 children killed this year; and there are 160 child detainees.

There can be little doubt that the banning of the six Human Rights groups is an attempt to silence Palestinian organisations that would provide evidence to the ICC’s investigation. The solidarity protests on Monday are a reminder to the Palestinian people that they are not alone and to the Israeli authorities that however hard they oppress the Palestinian people there is widespread international support for them. 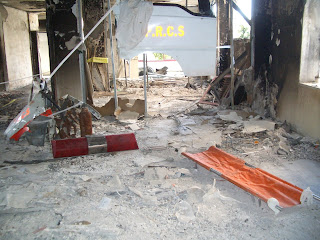