The Myth Of “Shadowy Figures” 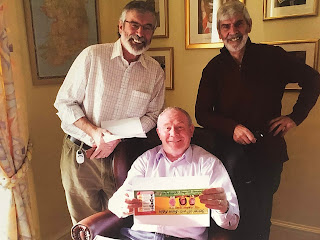 Mise agus Martin and Ted in Stormont Castle 2018
The demonising of republicans has long been an integral part of politics on this island, and especially in the lead into and during electoral campaigns. Through the decades of conflict Unionist leaders and British governments regularly posed as democrats while supporting anti-democratic laws, censorship and the denial of the rights of citizens who voted for Sinn Féin. Sinn Féin Councillors, party activists and family members were killed by unionist death squads, often in collusion with British state forces.

Successive Irish governments embraced this demonization strategy through Section 31 and state censorship. Sinn Féin was portrayed as undemocratic and dangerous. We were denied municipal or other public buildings to hold events including Ard Fheiseanna. In the years since the Good Friday Agreement these same elements have sought to sustain this narrative. The leaderships of Fianna Fáil, the Irish Labour Party, the SDLP and unionists, have been at one on this. Self-interest has shaped their approach.

Fianna Fáil Leader Micheál Martin regularly uses the Dáil to attack Sinn Féin. At one point in September 2015 he called on the two governments to suspend the institutions in the North! When the institutions did collapse in 2017, over the Renewable Heating Incentive scheme and the denial of rights, he changed his tack to one of “not comprehending” why there is no Executive and Assembly in the North.
In January Micheál Martin kicked off the current negative campaigning with a claim that Sinn Féin is not a “normal” democratic party. Decisions he said were being made by “shadowy figures”, by an unaccountable Ard Comhairle and by people in the Felons Club and Connolly House in west Belfast. Stupid, yes, but recent loyalist threats and death threats against Michelle O’Neill and Gerry Kelly mean that vacuous claims of “shadowy figures” feeds into a context in which people can be targeted.
Previously in the Dáil Micheál Martin identified two of these as Ted Howell and Padraic Wilson. In more recent days Marty Lynch, Sean Murray, and Bobby Storey have all been named. Teachta Martin knows all this to be rubbish. 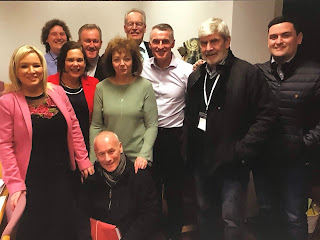 Some of the Sinn Féin negotiation team at Stormont: Michelle O'Neill, Seán MagYidhir, Mary Lou McDonald, Conor Murphy, Pádraic Wilson, Carál Ní Cuilín, Gerry Kelly, Declan Kearney, red Howell and Stephen McGlade
The reality is that Ted, Padraic, Big Bob, Sean, and Marty have been part of the Sinn Fein negotiating team for a very long time. Mr. Martin knows some of them. Ted was part of the team which produced the two seminal documents Scenario for Peace in 1987 and Towards a Lasting Peace in Ireland in 1992. At different times he has been part of delegations which met with John Bruton, Dick Spring, Pronnsias de Rossa, Leo Varadkar, Charlie Flanagan, Simon Coveney, Tony Blair, Gordon Brown and Theresa May. He has also met Bertie Ahern, Brian Cowan and Micheál Martin and the DUP and UUP.
Ted worked closely with Tony Blair’s former Chief of Staff Jonathan Powell and attended meetings in Downing Street and Hillsborough Castle with Micheál Martin. Pádraic and Marty too were often part of these delegations and often held meetings outside of the negotiating events with senior Irish government officials.
Ted and Pádraic also have deserved reputations for the provision of first class meals and pastries during negotiations. We have shared these with some of those above, including with Simon Coveney.
Just before Christmas 2018 I published ‘The Negotiators Cookbook” co-authored with Ted and Pádraic and with recipes in the main from both. The Negotiators Cookbook was very well publicised. Ted and Pádraic were widely credited for their culinary skills. Hardly “shadowy figures”.
The single most important aspect of the Stormont House negotiation in 2014 was the effort to address the legacy issues. The Sinn Fein working group handling this important issue included Gerry Kelly MLA, Sean Murray, Caral ni Chuilin MLA and Bobby Storey. All former political prisoners. The then British PM David Cameron was present in Stormont House for some of the last hours of that negotiation. So too was Charlie Flanagan. When a roundtable meeting was held to conclude on this issue, Sean Murray represented Sinn Fein. He played a pivotal and constructive role in this as he has in resolving many of the contentious Orange marches which used to create serious difficulties in Belfast. 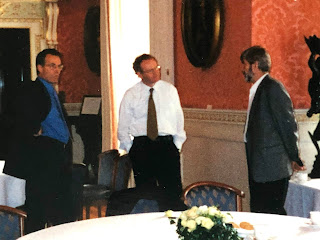 Gerry Kelly, Martin McGuinness and Ted Howell in Weston Park in 2001
Irish governments quite rightly celebrate advances in the North. They like to claim some of the credit for advances when they are made. In its Election 2020 manifesto Fine Gael has a whole section boasting of its intensive work in supporting the political parties in North in achieving the recent ‘New Decade, New Approach’ agreement. Apart from Bobby Storey who is unwell, all of those named as “shadowy figures” played key roles in that agreement.
All of these activists are well known. They have held senior public and elected positions in the party. Many have had long and fruitful relationships with senior Irish and British government Ministers and officials as we have charted a course from conflict, through a peace process, to an end to conflict and peace.
The role of sections of the media is also reprehensible.The Pat Kenny’s, Sean O Rourke’s and Miriam O Callaghan’s interrogate Sinn Fein spokespersons ad nuseaum about these claims. They dominate many interviews. Surely they could have checked the names out. All of the facts set out above about these decent highly respected and hard working republicans is readily available.  Some of the media heads involved are old enough to have known the goings on in the Fianna Fail leaderships or the terrible treatment of sections of Irish society, particularly women in the past. With some honourable exceptions the record of the Irish media, and particularly RTE is tawdry on these scandals. So too is their historical coverage of the north. The truth is sections of the Irish media are part of the Establishments cosy consensus. They are against challenging the status quo because they are part of the status quo.
Fianna Fáil and Fine Gael have selective memories. Both parties emerged out of conflict and a close relationship to the IRA. Many of their leaders, including Michael Collins, De Valera, Sean Lemass and others, all served time in prison. Some were responsible for acts of violence that mirrored those of more recent decades. Fine Gael’s relationship with the pro-fascist blueshirts is well documented. In the 1990s Fine Gael was in coalition with Democratic Left shortly after that party was formed following a split in the Workers Party. The history of the Workers Party and the so-called Official IRA is well known.
During the conflict republicans were challenged and it was demanded of us that we embrace unarmed politics. Protestations by me and other Sinn Fein representatives that this was exactly what Sinn Fein was about were dismissed as was our growing electoral support. Now that some who were political prisoners or former combatants have fully embraced the new dispensation we are being told that this is not good enough.
Not only is this stupid, unfair and self serving it also ignores the positive influence that activists from this background have with other republicans. The reason the anti peace process armed groups have so little support in republican heartlands is because  men and women of integrity with long records of hard struggle have stood up against them. Incidentally, the two governments accept and work with Sinn Fein elected representative with exactly the same history as those named as “shadowy figures”. I am certain if Pádraic Wilson, Ted, Big Bob or Marty Lynch, Seán Murray or others like them stood for election in their communities they would be elected.
As for the role of the Ard Comhairle and elected representatives ? Sinn Féin agrees policy at our Ard Fheis which is entirely open to the media and is widely covered by it. Our Ard Comhairle and party leader are elected at the Ard Fheis. Very democratic. Very public, very open.
One Fianna Fáil TD John McGuinness rebutted his own leaders claims. He said that the decision making process in Fianna Fáil is similar to that of Sinn Féin and he said: “I find it strange that they would say that [Fianna Fáil] TDs are consulted – sometimes we are not consulted at all.”
That’s probably true of all these parties. But there is no media scrutiny of the small group of advisers who aid Micheál Martin. Who is Deirdre Gillane or Pat Mc Parland or Sean Dorgan?  I’m sure they are decent people doing their best by their own lights.  I might not agree with them but I have no reason or desire to cast aspersions upon them. Ditto with Leo Varadkar’s team.
So thank you Ted, Pádraic, Marty, Séan and Big Bob and all the other “shadowy friggers”. Onwards and upwards. 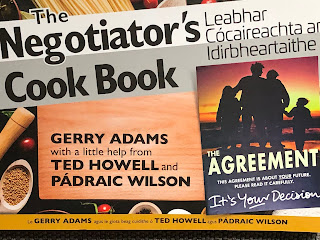