Rewriting History; Ratcheting up the Brexit crisis; Day of Action 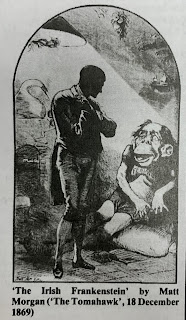 “The first casualty when war comes is the truth” said US Senator Hiram Johnson in 1917. We know only too well from our own recent experience of reporting on the decades of conflict how true this is. However, it misses the equally important other side of the coin – the victor writes the history.

The narrative of European colonialism, and especially of the British Empire, is full of examples of this. The British public today still believes that the Empire was great! While those in Ireland, in Africa, in India and elsewhere who suffered from its exploitation and brutality see it as a thief, an exploiter, a mass murderer, the purveyor of famine and poverty.

The English claim they came to Ireland to civilise the barbarians. Colonial and western powers often use the excuse to justify their colonial occupation and military interventions. In recent years this was evident again in Iraq, in Afghanistan and in Libya. The French philosopher and writer Jean Paul Sarte described it well: “Terror and exploitation dehumanise, and the exploiter authorises himself with that dehumanisation to carry his exploitation further.” 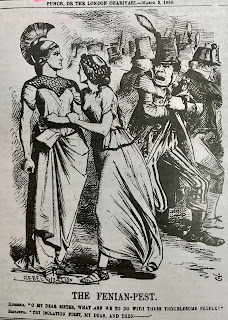 In the 19th century British strategy in Ireland was based on this approach. We Irish were the problem. They, the British were the solution. The British state presented the Irish as ape-like in order to justify its use of coercion. O’Connell who was leading a campaign to end the Union with Britain was described by the Times as “scum condensed of Irish bog” and a “greedy self-serving Satan.” In 1846 in justification of even greater coercion the Times wrote: “The great obstacle to tranquillity in Ireland is the national character – the character of the masses of the middle classes, of the senators of Ireland … When Ireland acts according to the principles of civilised man then she can be ruled by the laws of civilised man.” The 19th century saw Coercion Acts passed every year by London to maintain its domination.

During the years of conflict that followed the rejection by Stormont of the civil rights very modest demands the British state and its military attempted to manage the news. General Frank Kitson, Britain’s leading counter insurgency expert wrote: “the press properly handled is one of the government’s strongest weapons.”

Many programmes were banned.The lie used by the establishments North and South was that the British Army was needed to prevent civil war between Catholics and Protestants. This narrative helped fuel the years of war. It made the job of dialogue and conversation almost impossible. Sinn Féin was dehumanised and by extension anyone who spoke to us was the target for vilification. John Hume endured huge criticism for daring to talk to me about peace. The Dublin establishment was outraged. Or pretended to be outraged.

Almost 25 years after the Good Friday Agreement the British establishment is still fighting the war. The spooks and securocrats who run the British system know the IRA was not defeated. Instead they facilitated and supported the peace process. This is not acceptable to the war mongers and their cheerleaders on the British side. They are also worried that the historic narrative is increasingly exposing Britain’s illegal and violent actions during those years. In addition, the fact that Sinn Féin is in government in the North and might well lead a government in Dublin in the near future is intolerable to them.

It therefore came as no surprise when the London Telegraph revealed at the weekend that the British government is to commission a history of the ‘troubles’ beginning in the 1960s up to the signing of the Good Friday Agreement. The Telegraph story states that this idea comes from Britain’s colonial office in the North – the Northern Ireland Office (NIO) – and that London will appoint a group of historians to write this official history. This group of historians, appointed by the government, will they claim, be independent of the government. Mar dhea!

Censorship and bias in the reporting of events and the interpretation and analyses of those events is a powerful weapon in any government’s arsenal. It allows it to shape attitudes in society in its own interests.

British governments are especially good at this. On the one hand they pose as the defenders of free speech and democratic change while imposing censorship or restricting debate and refusing change when it suits their national interests.

So, on the 19 October 1988 Margaret Thatcher introduced censorship restrictions on Sinn Féin. Our voices could no longer be heard. Several days later the same Thatcher visited Poland where she lectured the Polish government on the merits of openness: “In modern societies, success depends upon openness and free discussion. Suppress those things, and you are unable to respond to the need for change.”

Of course, Thatcher was not alone in employing this hypocritical policy. Successive Irish governments imposed Section 31. The effect of state censorship was pernicious. It rolled over into a revisionist history of recent Irish history which encouraged partitionism.

The British government’s current effort to close down legacy cases is an example of this hypocrisy. The right of families and victims to truth are being set aside through the introduction of a statute of limitations. The British state is intent on hiding the criminal actions of its state forces and its use of state collusion with state sponsored murder gangs.

However hard the British government seeks to do this; however many revisionist historians they employ to bolster Britain’s view of history, the case of Pat Finucane; the importation by British intelligence of South African sourced weapons for Loyalist groups; the three reports by John Stevens; the role of state agents like Brian Nelson, and of the Glenanne Gang; the deaths of hundreds of victims; and the countless official reports by the Ombudsman and others into state collusion, will continue to haunt the British government. No amount of historical revisionism will change this.

Ratcheting up the Brexit crisis

For those of you unfamiliar with the language of Brexit, Article 16 is the legal mechanism within the Irish Protocol which can be triggered if the Protocol is creating serious "economic, societal or environmental difficulties" that are liable to persist.  This would involve one side or the other unilaterally suspending parts of the deal.

The British government has been claiming for months that the bar for invoking Article 16 was reached in the summer. In his efforts to heighten the sense of crisis Jeffrey Donaldson has repeatedly demanded that the British invoke Article 16 if the EU do not concede to London’s demands. Loyalist groups have hijacked several buses and the Progressive Unionist Party says there is no longer a basis for unionists supporting the Good Friday Agreement. The threat of violence is being consciously whipped up by some in unionism to raise tension and leverage concessions from the EU.

In contrast a University of Liverpool survey found that most unionists do not regard the Protocol as a priority concern.

More significantly last week four senior U.S. Democrats who chair major Congressional Committees - Gregory W. Meeks, Chair of the House Foreign Affairs Committee; William R. Keating, Chair of the Europe, Energy, the Environment and Cyber Subcommittee; Earl Blumenauer, Chair of the Ways and Means Subcommittee on Trade, and Brendan Boyle, Chair of the European Union Caucus, -  issued a joint statement in which they called on the British government to end its threat to use Article 16. The four US politicians warned that the full implementation of the Protocol is “critical for ensuring Brexit doesn’t undermine decades of progress toward peace on the island of Ireland."

Adding to the pressure on the Johnson government the European Commission president Ursula von der Leyen met President Biden in the White House also last week and emerged saying that the EU has the support of the United States. Von der Leyen told journalists that the EU and the USA share the assessment that “it is important for peace and stability on the island of Ireland to keep the withdrawal agreement and to stick to the protocol.”

But for now the DUP and Johnson still appear determined to create a real crisis with the EU. London has set a December deadline for a deal with the EU on British terms. Will they won’t they trigger Article 16 as part of this process? We should know soon. 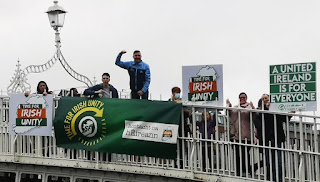 Well done to everyone who participated in last Saturday’s Day of Action in Belfast and Dublin which promoted the theme – Unity in Our Time. The new Bobby Sands mural was officially unveiled on the International Wall in Divis Street. It is based on a photo of Bobby taken at the first major political status march in August 1976 and is set against the backdrop of the Black Mountain. There were white line pickets across Belfast and Dublin City, as well as on the Ha’penny Bridge on the Liffey.