The BannIng of Mary Lou 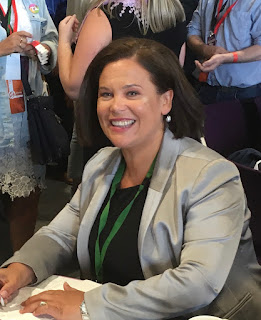 Sunday’s Business Post and The Irish Mail on Sunday opinion polls indicate a strong element of discontent with the politics of the two main conservative parties in the South – Fine Gael and Fianna Fáil. They are attracting less than 50% of the vote. Despite a succession of polls identifying the same trends – and we should always acknowledge that opinion polls don’t always get it right – RTE has chosen to exclude Sinn Féin President Mary Lou McDonald from its leader’s debate in the last week of the general election campaign.


Instead, like Virgin media last week, RTE’s ‘head to head’ will only involve Leo Varadkar and Micheál Martin – two leaders who have been partners in government for the last four years. Both parties published their election manifestos last Friday. TheJournal.ie reviewed them and concluded that “there are many ways the parties are broadly similar.” Professor Gail McElroy, from Trinity College Dublin, told TheJournal.ie that “historically there isn’t a clear difference between Fine Gael and Fianna Fáil, and their voters… They’re both centre-right parties and their fiscal policies are really not that far apart.”
The same recent opinion polls suggest Sinn Féin is attracting significant support. Additionally, the evidence of the last four years in the Dáil demonstrates that is has been Sinn Féin’s team of TDs and Seanadóirí who have been the real and effective opposition to the Fine Gael/Fianna Fáil alliance.
The decision therefore by RTE to present the formation of the next government as a straight choice between Varadkar and Martin is evidence of a blatant disregard of the Dáil realities and of its statutory obligations as the state’s public service broadcaster. RTE has a responsibility to behave in a fair, objective and impartial manner and to inform and educate citizens about the choices facing them. It clearly is not doing this in this leader’s debate.
So, why this intransigent refusal to include Mary Lou McDonald in the debate? It is more than some hangover from the days of Section 31 and state control of the media news reporting. It is a mind-set – partitionism - within the political and media establishment which is rooted in our colonial history, in partition, in the counter revolution that took place after the Tan War, and in the establishment of two conservative states on the island of Ireland.
It is the mind-set which was evident in the recent decision by Charlie Flanagan, the Minister for Justice, to commemorate the RIC and Dublin Metropolitan Police. Instead of being proud of our history of resistance and rebellion the political establishment is ashamed of it. This attitude is a symptom of the unfinished nature of the national struggle. It lies in our colonisation.
That has shaped our character as a people. On the one hand there is the wonderfully humorous, subversive, never-give-up attitude of most Irish people who are fair and decent and are for freedom. But some, particularly those in power since partition in the Irish state, inherited the confused and conditioned traits of the colonised mind shaped by centuries of being governed by an imperial power.
Liam Mellows, who participated in the 1916 Rising and was summarily executed by the Free State forces during the Civil War, put it well during the Treaty debate in 1922, when he spelled out the consequences of partition. He said: ‘Men will get into positions, men will hold power and men who get into positions and hold power will desire to remain undisturbed …’He was right.
Partition saw a political establishment emerge in the South that settled for a 26 county state that stopped at Dundalk and Aughnacloy, at Belleek and Strabane and Derry. In the early days of the state Radio Athlone and then RaidióTeiifís Éireann refused to play popular republican songs, songs of the revolutionary period. Internationally renowned Irish authors were banned, including books by Liam O’Flaherty, Sean Ó Faolain, Frank O’Connor and Edna O’Brien and Brendan Behan, and many others 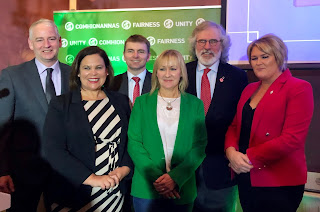 Cllr Tom Cunningham, Mary Lou McDonald, Cllr Ruairí Ó Murchú, Imelda Munster, Mise agus Joanna Byrne
Section 31, an obnoxious piece of legislative censorship, was introduced in 1971 by a Fianna Fáil Minister. It was later amended and a new order introduced by former Labour Party Minister Conor Cruise O’Brien in 1976. Under that order no interviews with anyone from Sinn Féin could be carried under any circumstances. Larry O'Toole, now a Dublin Councillor then a Trade Union official, was banned by RTÉ from speaking  about a strike in Gateaux, a cake factory in Finglas north Dublin, where he worked. Others had similar experiences, including a Sinn Féin Councillor who witnessed a fatal fire in Bundoran but could not be interviewed as an eyewitness. In March 1988 Jenny McGeever broadcast a short clip of Martin McGuinness in a report she did for ‘Morning Ireland’ on RTE’s Radio 1 about the journey home from Dublin of the remains of the three IRA Volunteers killed at Gibraltar. She was immediately sacked.
Sinn Féin voters from the north were also disenfranchised by RTE. After election victories newly elected SInn Féin MPs or councillors were ignored while our defeated opponents were interviewed. The same thing happened after serious incidents, including fatalities. British Army spokespersons were often interviewed! Sinn Féin never were.
On other occasions in the 1970s and 80s songs were banned, including several by Christy Moore. These included ‘90 miles from Dublin’ and ‘The Time Has Come’ which dealt with Armagh Women’s Prison and  the H-Blocks, ‘McIlhatton’ and ‘Back home in Derry’ (because they were written by Bobby Sands) and ‘They Never Came Home’ about the Stardust tragedy.
I had my own run in with the RTE censors in1993 when RTE refused to carry an advert for one of my books – The Street and Other Stories. Conor Cruise O’Brien claimed in evidence to a court hearing the banning order that the book of short fictional stories were propaganda for the IRA. He claimed that the opening words would offend and corrupt the Irish public. “I have in mind,” he said, “the opening words: ‘This is Gerry Adams speaking.’ The court found against RTE. RTE appealed to the Supreme  Court. It found in favour of RTE.
In more recent times in September 2017 partitionism saw RTE mutilate the map of Ireland on the Late Late Show. Everyone in the North simply vanished into the sea with a new coastline running from Louth to Donegal. The north disappeared. This same image was first used by the Irish Embassy in Washington some years earlier as the Irish government has increasingly defined ‘Ireland’ or ‘the Nation’ as 26 counties. The Late Late Show often bans viewers from the north from its competition. Gaels in the north have difficulties watching or often not being able to watch Gaelic games on the self-proclaimed national broadcaster.
There is also a symbiotic relationship between some senior elements of the media and the government of the day. Journalists regularly shift from their role as journalists to work for government Ministers, departments and political parties. This inevitably shapes and fuses the politics of both.
Many in the political establishment in Dublin have never fully embraced the complete meaning of the Good Friday Agreement. While this accord has benefitted all of Ireland its positive equality focussed imperatives rarely penetrate south of the border. The Dublin establishment see it essentially as being about the north. The North remains for most a place apart – it’s up there – and this is then reflected also in how the political establishment deal with Sinn Féin. 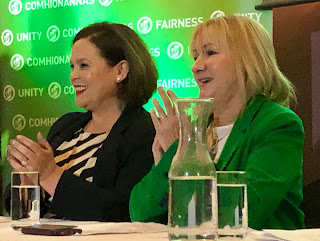 This is part of the context for the exclusion of Mary Lou from the leader’s debate. It is also the mind-set which saw Fine Gael, supported by Fianna Fáil leader Micheál Martin, decide to commemorate paramilitary forces – the RIC and Dublin Metropolitan Police – that had violently sought to prevent the Irish people achieve freedom. The reality is that neither the Fine Gael or Fianna Fáil leaderships are about promoting Irish Unity. But they recognise in Sinn Fein a party that is committed to unity and consequently a party to be marginalised, excluded and banned.
There are many decent, fair and objective broadcasters in RTE. There are many good journalists. They also need to speak out on these issues. Or does a culture and a history of censorship make that too awkward or challenging a question.