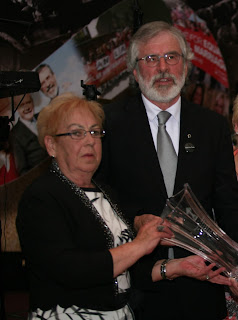 I had the pleasure at the recent Belfast Sinn Féin Cairde event to make presentations to Marguerite Gallagher and Pat McGivern – two strong, indomitable and committed republican activists. Two tireless, hard-working stalwarts of Green Cross who have been working on behalf of republican prisoners and their families for decades.
Unfortunately, Marguerite was unable to be present on the night. She was ill. But I visited her several days later. Pat McGivern was there. Both women, like many other women of their generation, have been working away diligently and sometimes invisibly for over half a century and longer to advance the objective of Irish unity and in support of prisoners and their families. If our movement was a building these women, and other women like them, are the foundation, corner stones and the scaffolding which holds our structures together in good times and in bad. 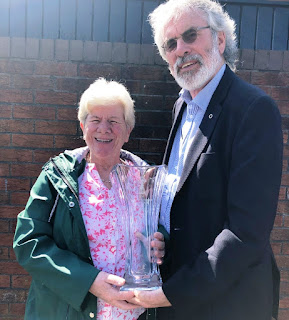 As well as collecting Green Cross, fighting election campaigns, and working within their local communities Pat and Marguerite have staffed the Green Cross book shop - Siopa an Ealaine – at the Sinn Féin centre on the Falls Road for over 30 years. They have been for the many thousands of tourists and visitors the smiling, welcoming face of Irish Republicanism.
Both women have demonstrated enormous courage through their work in the shop. Despite the threats and harassment from British soldiers and unionist death squads it was always opened. They were there in February 1992 when RUC officer Allan Moore, pretending to be a journalist, went into the Sinn Féin advice centre next door to the shop and opened fire killing Paddy Loughran, Pat McBride, and Michael O'Dwyer. When Moore left the building he was grabbed by the arm by Marguerite who was dragged by him to his car which was parked in Sevastopol Street. He pushed her away and drove off.
Both Pat and Marguerite come from the Falls. Marguerite comes from a spinal republican family – the O’Neill’s – but Pat is equally steeped in local republican activism. All of the events of the last half a century that visited that part of our city of Belfast – the pogroms, the Falls curfew, internment, the hunger strikes, numerous incidents, atrocities and attacks, the elections, all of the elections – Marguerite and Pat, like many other women, were there. 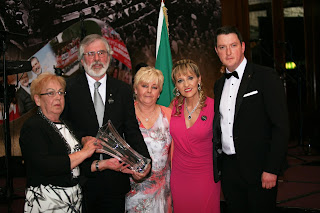 Pat and Marguerite were particularly centrally involved in the Green Cross. That organisation, which was founded in 1973, provided much needed support for prisoners and their families. They follow a long and honourable tradition of like-minded activists who in the midst of conflict have come together to support prisoners and their families.
A century ago, in the aftermath of 1916 Cumann na mBan founded the White Cross. Sorcha McMahon, Áine Ceannt and Kathleen Clarke established the Irish Volunteer Dependent’s Fund. When John Reynolds a Volunteer who had escaped from the GPO signed the first cheques on behalf of the Volunteer Dependent’s Fund he was ordered to leave the country by the British. From that point on fund raising in support of prisoners largely fell to the women activists.
In every subsequent phase of struggle there have been similar organisations. An Cumann Cabhrach was founded in November 1953. The objects of the Committee were stated to be:
(a) to raise funds to provide for the dependents of Republicans Prisoners.
(b) To look after the welfare of such prisoners pending release.
(c) To create a Central Fund from which grants may be made at the discretion of the Committee in cases of distress arising directly out of Republican activities.
Another important aspect of the work of An Cumann Cabhrach and Green Cross is the support they provide to the families of fallen IRA Volunteers.
Following the pogroms in August 1969 and especially after internment in August 1971 the numbers of political prisoners, especially in the North, grew substantially. Over the years it is estimated that up to 20,000 nationalists and republicans spent time in prisons. The Prisoners Dependents Fund was established to help prisoners families.  The Irish Republican Prisoners Welfare also played a crucial role helping families and in 1973 the Green Cross was set up. It was a grassroots organisation involving mainly women in every housing estate, hamlet, town and village. They want out every weekend, in all weathers. Green Cross collectors, often harassed by the British Army, RUC and UDR, diligently rapped doors and went into pubs and clubs with their little boxes seeking donations. And within the diaspora groups like Irish Northern Aid, Clan na Gael and Australian Aid for Ireland, all played an important role supporting Green Cross.
With so many prisoners and families impacted by imprisonment the support Green Cross provided was not huge. But every little helps, especially if food parcels have to be sent into the prisons to supplement the poor food dished out by the prison systems. Events and functions too were organised to raise money and much welcome succour was given to thousands of families, including mine. 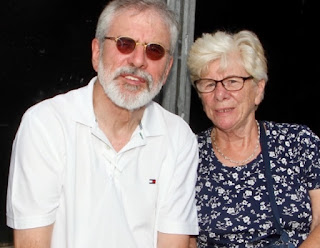 There is still a role in these more peaceful times for Green Cross, particularly helping the families of our patriot dead. Last week Pat McGivern, despite undergoing chemo treatment, was out collecting her Green Cross as usual. At the Cairde event we honoured Pat and Marguerite as warm, generous, unselfish, and very wonderful comrades who kept us safe and kept us grounded. I want to say thank you to them and to all the women and men who played their part in the PDF, Green Cross, An Cumann Cabhrach and the Republican Prisoners Welfare Committee.
I started to name some of those involved over the decades in raising funds for the families of republican prisoners, including those in Northern America and Britain, but there are too many and as always someone would be left out.
Suffice to say that without them some of us might not have survived.
Thank you Marguerite. Go raibh maith agat Pat. And everyone else who helped.