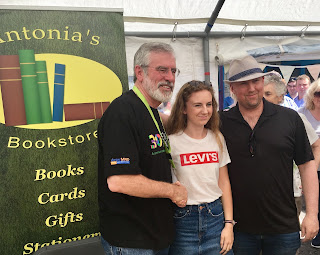 Last Saturday I was in Kells, in County Meath for the Hinterland Festival of Literature and Arts. I was invited to speak about my latest book – Never Give up –  to read extracts from it, and answer questions from an audience. It was a beautiful day and the Kells Theatre was full. I rarely do events like this, though God willing, another one is scheduled for 6 August during Féile An Phobail. I will be in conversation with Jude Collins at 7 pm  in St Marys. Drop in to talk about books, writing and literary matters.

I love books. I love book shops. I love people who love books. The Hinterland Festival was teeming with people like that. My thanks to the organisers, to Antonia’s Bookshop in Trim for the help and support and to Bookmarket Café on Market Street for the food. And a special thank you to the audience in Kells Theatre for an enjoyable discussion. 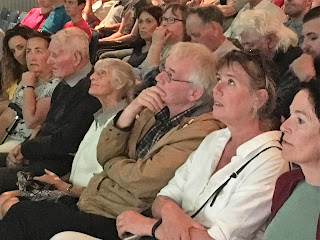 It was especially good to see Dessie and Maire Ferguson with some of their clann there. Desi – Snitchie - Ferguson was one of Dublin’s great footballers. A fine hurler also. He has two All Ireland Football medals won in the era of Heffo, Jimmy Keaveney and other great athletes in the 50s and 60s. But he still rues missing a hurling one. Desi and Máire are now in their eighties but thankfully in good form. That’s despite Snitchie’s time in Portlaoise Prison and Máire’s time rearing their large clann in his absence. Great people.
One of the short pieces I read in Kells recounted my mother’s experience of the family home being raided by the British Army the day after internment was introduced on August 9th 1971. I came across her handwritten complaint form by chance as I was looking at an exhibition of memorabilia connected with the Ballymurphy Massacre in which 11 local people were killed by the British Parachute Regiment in the 36 hours after internment. I never knew the complaint was made or that the form existed. In it she wrote:
“Damage to property, theft. Damages to house: Slashed head board of divan – ‘Britain for ever’ written on it. Slashed 2 mattresses, destroyed clock, T.V. and radiogram. Smashed pictures on the wall and removed 2 pictures (Barnes & McCormack & 1916 Proclamation.) Robbed gas meter. Stole bracelet (£8) and transistor radio. A clock also taken. Destroyed food stuffs and clothing. Pulled cupboards off the sink units. Took the Alsatian with them (supposed to be at Paisley Pk on West Circular). The military took over the house and gave me 10 minutes to get out of it. As we were leaving soldiers in a Saracen fired shots in the air to frighten us and laughed”.
The house had to be subsequently demolished because of the damage done by the raid and by Brit armoured vehicles smashing against the outside wall repeatedly in the weeks before internment. That and the jerry build structure mean that II Divismore Park no longer exists. McKees, good neighbours, have a shop there now. My mother always said 11 Divismore Park was the place in which she was happiest.
I thought of this as I read from Never Give Up.
I thought of Mrs McCullough from Ballymurphy Drive who challenged a young British soldier who was part of a raiding party which wrecked her house.
‘Does your mammy know what you are doing to my home? She scolded him.
He looked at her as she repeated her question. This tiny little Ballymurphy woman, Kathleen McCullough, barely raised her voice.
‘Well does she?’
The young British soldier started to cry. 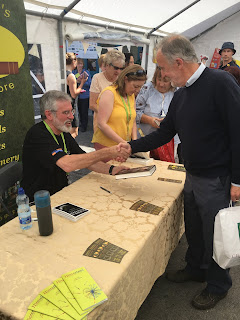 Books have the power to tell stories like this.  Or to remind you of them. They can make you think. Or laugh. Or cry. A good book can be inspiring. Of course this passage about my mother’s complaint would make me think anyway. It’s about my mother after all and our home and I hadn’t read it in some time. But what strikes me is that her matter of fact way of writing her complaint told this story better than I ever could.
That’s why everyone who can write should write. Or learn to write if you need to. Or at least find some way of telling your story. Thankfully the oral tradition in Ireland in both Gaeilge and Bearla remain strong. That’s why Arts Festivals like Féile and Hinterlands are so important and so popular. And why books are so essential. 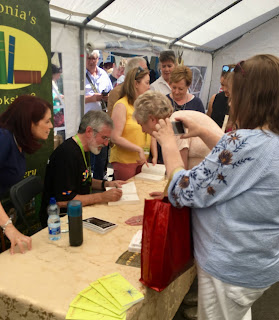 So if you still don’t fancy writing a book? Well then read one. Join your local library. My Granny brought me to The Falls Library when I was about six or seven. She was a millworker and widow woman. When she was a child she was a half timer. Part of her time in school. Part of her time in the Mill. But she knew the power of books. The importance of imagination. Even in times of poverty. Especially in times of poverty.
She taught me to love books. And I’m glad she did. 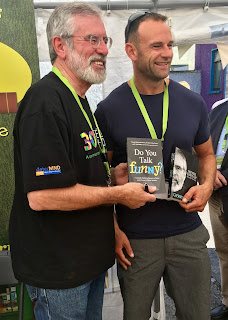 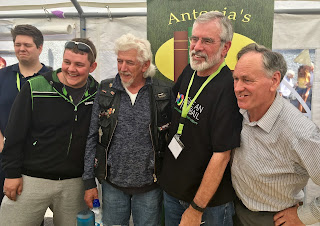