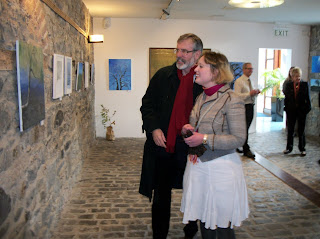 This blog gets invitations to attend all sorts of events. Regrettably time and a busy schedule does not always permit me to accept. But on Friday I travelled to the Visitors Centre at Phoenix Park in Dublin to open a new exhibition by Eve Parnell.

It was a very enjoyable event. Eve and her mother and father were very welcoming.

And it was about trees. And as regular readers of this blog will know I have a great fondness for trees. 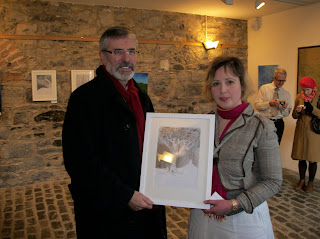 ‘The Act of Enclosure’ is an exhibition of pencil drawings of trees on paper. They are remarkable and captivating images of trees which offer another view of the natural world and recognise and celebrate the beauty, strength and presence of trees.

Every autumn this blog gathers up seeds and plant them. You can pick them up everywhere. Ash and acorns and Beech and sycamore. This blog has collected seeds from the Falls Park, the Belfast Hills, as well as farther flung places like Aras an Uachtaran and Chequers, the White House and Downing Street and other great houses across these islands.

Once I brought some seeds back from outside San Francisco of giant Redwood – Sequoia – Trees but they failed to take. Rita O Hare on the other hand succeeded and now has one standing several feet tall – almost as tall as herself!

I pot scores of seeds and many of them end up as presents. Sometimes for a birthday or Christmas, occasionally for a new birth but also for a death.

The seeds I grow most are chestnuts. I planted one outside in my back garden about 20 years ago and each year it produces hundreds of seeds. However the Chestnut is not a native tree and it’s really important that we make an effort to plant native species.

At the beginning of the 20th century only 5% of land in Ireland was wooded. This is a disgracefully low figure. Much of the older woods and forests were ripped up in the 16th and 17th centuries for export to Britain where they were used to build ships.

A hundred years later that figure has only risen to 7% and much of this is confer.

Native trees only account for around 1 per cent of the total and ancient woodland which has existed for hundreds of years is even rarer. In Ireland native trees are Oak, Ash, Hazel, Birch, Scots Pine, Rowan and Willow.

This year the Tree Council of Ireland set 2010 as the ‘Bliain na Beithe’- the Year of the Birch. And last month schools across Ireland took part in a one day celebration of the Birch with guided woodland walks.

Next year 2011 has been declared as ‘Bliain na Foraoise’. The international ‘Year of the Forest’. The concentration will be on the part played by forests in shaping and sustaining our environment.

The importance of trees was recognised by the druids and was at the centre of life for them and for the people of this island. They believed that trees were a source of great wisdom. The wood of many trees was also considered magical. Among these is the Hazel from whose wood Harry Potter, other wizards and their friends get their wands!
The Oak was the most sacred tree. The druids believed it symbolized the center of the universe.

It is true that for many the Oak is the king of the forest. Did you know that a single Oak can support a huge variety of life. For example it is estimated that up to 600 species of insects live in an Oak. It also supports small mammals, fungi and birds. From its bark comes Tannin which is used for tanning leather while its wood is used for furniture and barrels. And many of the roofs of those great houses mentioned earlier are made of Oak.

The destruction of our native species means that much of our wood is now imported. Last week an RTE documentary about Latvia showed how huge amounts of wood are being exported from there to Ireland for all sorts of use, including fence posts.

Why can’t we be growing our own wood and creating employment? But then this government, like previous ones, prefers to sell off our natural resources for a pittance or fails to exploit in a managed and sustainable way those resources we have.

Take the camán – the hurley stick. Very few are made from wood grown in Ireland. And yet hurley makers produce between 10,000 and 20,000 each year from imported Ash.

But back to Eve’s exhibition and her wonderful pencil drawings of trees.

Rochelle Mass’s poem ‘Waiting for a Message’ sums it all up.

Trees help you see slices of sky between branches,
point to things you could never reach.
Trees help you watch the growing happen,
watch blossoms burst then dry,
see shade twist to the pace of a sun,
birds tear at unwilling seeds.
Trees take the eye to where it is,
where it was,
then over to distant hills,
faraway to other places and times,
long ago.
A tree is a lens,
a viewfinder, a window.
I wait below
for a message
of what is yet to come.

Keep drawing Eve. Fair play to you and your talent. 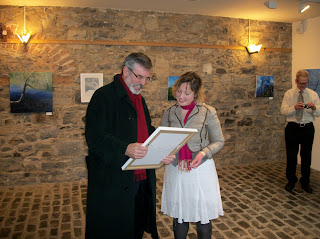 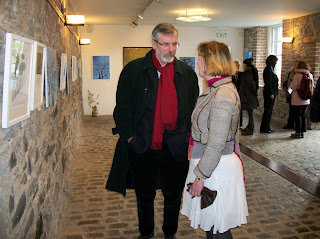 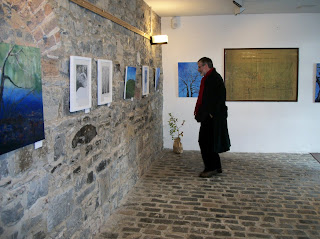 The hill of the ancient god was a sweet place in the silence, and he rested there, and made him a pillow of fern--and listened to the soft breath of the wind in the rowan tree. Its sigh of love for the green earth was a sweet song, and he slept there to that music, ...he talked of the trees of magic where white flower and fruit of gold grew on the same branch~:
from "THE DRUID PATH" http://www.sacred-texts.com/neu/celt/tdp/index.htm The ancient and modern Art of Ireland , is in the understanding of nature. very good Gerry..