Your woman looked me with a smile in her eyes. I knew I was in trouble.
Her smile didn’t go as far as her lips.

‘How come I didn’t feature in your blog about all the good cooks?’ she asked.

‘Do my tuna sandwiches not count?’

Your man interjected with his usual diplomatic skill. Your woman didn’t
take him under her notice. She didn’t even ignore him.

‘Whenever you phone in here lukin someone to get you your lunch, who is
it that does it?’

‘You’ I said like a man who knows his place in the scheme of things.

‘Well, why don’t I get a mention in your blog. Do you have to go up to
Stormont before anyone takes any notice of you?’

By now her smile had stretched to her lips. I relaxed a wee bit as I
ushered your man out of the room. We were in the Sevastapol Street office.

‘Your tuna sandwiches are the best I’ve ever eaten’ I said.

And at the risk of upsetting anyone else who ever gave me a tuna sandwich
let me make clear that they are. The best that is. Unless you’re a tuna.

‘And how come I never get invited to your fancy diners club on Mondays and
Tuesdays?’

‘It’s in your office’ your woman pointed out, not unreasonably.

‘Let me have a word with him?’ I grovelled.

‘Don’t think you’ll get around me as easily as that’ she retorted.

‘Are you making any tea?’ she continued.

That sounds like an innocent enough question. But in actual fact its what
your man calls the interrogative imperative. In other words it isn’t a
simple query about my tea making intentions. Not when it comes from a
woman. On the contrary when it comes from a woman it is a direct order.
So I did what any self respecting coward does in these circumstances. I
obeyed. I went and made your woman her tea.

Afterwards your man and I discussed women and the ways they have of
getting their ways. He disapproved of my approach.

‘That’s easy’ I said with a laugh‘ Get off my tail and I’ll tell you.’

He didn’t laugh with me.

‘When you were on your holidays.’

‘Well that explains it’ I said.

‘Ah but what are you going to do?’ Make them tea as well?’

‘No I’m going to get their photo and post it with this. Gort are a good
club and their camogs are brilliant. It’s a great achievement for them to
win the Junior championship’. 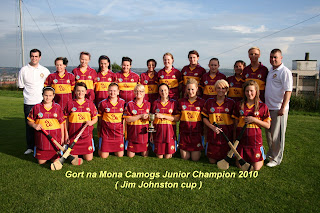 Aontroim Camogs are in Croke Park on Sunday against Port Lairge –
Waterford, in the Gala All Ireland Junior Camogie Final. It is a great
achievement for the players and their management team. Our camogs topped
the Premier Group One and narrowly held off Down to qualify for Sundays
game. Waterford will be hard to beat but the Saffrons are no mean team.
They are there on merit. This is the first time in a long for Aontroim
Camogs in Croke lets hope the big venue doesn’t put them off. Good luck
to them all. Aontroim Abú.

Update on the Camogie game directly from Croke Park where this blog is esconsed in the Hogan Stand. It is a draw. Aontroim camógs played brilliantly. A credit to our county. Na Camógs abu!
Posted by Gerry Adams at 11:00 PM

Interrogative imperative, yes. Tell the truth, the whole truth and nothing but the truth.There are always exceptions to rules, unlike some sports. Now understand, these are pretty general. Bullies,in general like to speak in the declarative and the imperative and often in the exclamatory, when in fact, they should be listening and speaking in the interrogative. Men should have their ears tuned in for a woman speaking in imperative ,before it moves to a exclamatory discourse. Good to hear from the other part of the home team ,Gerry