Stand Up for Peoples Rights 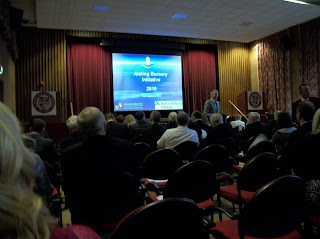 This blog spent Tuesday evening at the Aisling Bursary awards. The Aisling Bursaries have been around for 11 years. The idea behind them is very simple. To seek sponsorship from businesses and individuals in west Belfast to provide some financial support for third level students. These include mature students coming back into the education system. Women, lone parents. The amount involved is usually £1000 – not a lot but important when trying to make ends meet on limited resources or when you are part of a family with a limited budget.

One young recipient Amanda McAteer, a former pupil of St. Rose’s and St. Mary’s, spoke eloquently at the event of the importance of the sponsorship in helping to make her goal of becoming a teacher possible.

Since they began the Aisling Bursaries have raised over £400,000 and over 400 people have benefited from them. That is a considerable achievement and great praise is due to the Belfast Media Group and the West Belfast Partnership Board who make it happen each year; to those who organise; advertise; identify recipients; judge entrants; lobby potential donors; and raise the hard cash that this programme is about.

A special word of thanks has to go to the sponsors. There are 31 this year. These are difficult times and money is tight. But many of them from the beginning have handed over the money that makes the bursaries possible and successful. Without their big-heartedness and Aisling – vision – none of this would be possible.

Education is key to making a better future possible. In a very real sense the task of this generation is to prepare the next generation for the challenges they face and to equip them with the best tools and skills and education we can to overcome those challenges. 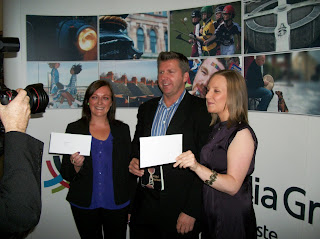 Todd Allen from the USA who sponsors the Eileen Howell bursary with this year's recipients.

The Aisling event is pioneering and practical because it demonstrates a commitment and investment in the education and empowerment of citizens. It also demonstrates that positive and progressive relationships can be forged between business, education and the local community.

But the 41 recipients this year, like the rest of us, face uncertain times ahead. The economic crisis is having a detrimental impact on jobs and investment and threatens our public services and communities.

In a few weeks time the British Chancellor is going to outline his governments planned cuts to public expenditure. The north is threatened with huge cuts.

Already and regrettably some politicians appear to have given up. I have heard some unionist leaders argue the Tory line that cutting public services is the right approach while other parties have simply thrown up the hands and surrendered to what they believe is inevitable.

It’s not inevitable. And no one should give up. Political leaders, the trade unions, business leaders and communities must take a stand against threatened cutbacks.

Why? Because if they have their way the Tories and the Lib Dems will turn the clock back decades and inflict huge hardship on the most vulnerable.

A succession of reports, mainly by the trade unions, have revealed that the poorest will be hit 10 times harder than the wealthy. If they go ahead the cuts will have a huge and detrimental impact on the disadvantaged and those in poverty. It will be the public services they rely on, in health and education and social services and transport, that would be hit hardest. Lone parents, the elderly and the sick are expected to suffer the most.

So, political leaders and parties in the north have to stand up for peoples rights. We have to defend public services. We need to agree a strategy which rejects savage cuts as the only answer. And we must provide alternatives.

That means demanding more fiscal powers, for tax gathering and other revenue raising authority. How can we manage the economy in the north without these essential economic tools?

The Executive must protect and defend disadvantaged communities and families by developing a strategy which prioritises investing in recovery, investing in jobs, investing in communities - not slashing and burning. Killing off businesses and jobs and stripping back public services will not revitalise the economy.

It also means working closely with the Irish government to get rid of expensive duplication which is caused by partition. There is a need for better public services.

There are two states on this island and a duplication of services, investment and job creation agencies and competing incentives for inward investment. Common sense tells you that this doesn’t make sense.

This blog believes in a new approach – an all-island approach which ends duplication and improves efficiency in the production of public services and the creation of jobs.

All of this is doable and is necessary to create the type of society in which those who received their bursaries last week have the best opportunity to use their new skills and contribute to society. 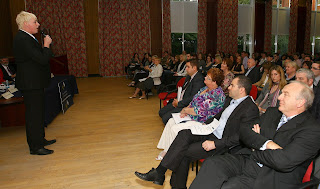 Niall Press who is off to London to study music serenading the audience with a great voice
Posted by Gerry Adams at 6:04 PM

Hello Gerry , I recall last years events on the Aisling Bursary awards.
Very great minds at work here. As a Educatior , and have been a very poor student,working my way through University was not easy ,earning a Masters degree in Education was something I could not think would ever happen, I was lucky. Still the keys to Education are often Self-management, Problem Solving and Working with Others , this can be learned. Personal Development,this as a life time goal.
An academic or a vocational style of curriculum is should be open for all Irish people, with opportunity to all needs.
The root of evil maybe the Irish governments need to get rid of expensive duplication which has been caused by partition. Education is one and one of the some, a new open and free social system, based on goals, needs and growth.
One of the the great programs, thanks once again Gerry.