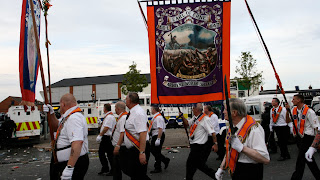 The street conflict which racked parts of the north over the 12th was largely a result of a small number of so-called dissident groups exploiting the tensions and fears surrounding Orange marches. Sinn Féin’s opposition to these groups is unequivocal and a matter of public record.

However, the fact remains that it is the obstinate insistence by the loyal orders to march through Catholic areas, and their refusal to talk, that is at the heart of the perennial violence that marks the marching season.

Orange marches have been the cause of serious sectarian strife in the 19th century, the 20th and now the 21st century.

The first serious violence around orange marches occurred in Belfast in 1813 and each subsequent year brought more conflict. Besieged catholic neighbourhoods got some respite when the British banned orange marches between 1832-44 and 1950-72.

However, the latter part of the 19th century saw the Unionist business class and landed aristocracy, allied to the British Tories, encourage the growth of the Orange Order in opposition to Home Rule. As a result there were violent pogroms in Belfast in 1857, 1864 and 1872 against Catholic ghettoes.

After partition in the early 20th century the Orange Order and other loyal orders dominated unionism.

James Craig, the north’s first Prime Minister after partition, and whose stern faced statue overlooks the Great Hall in Parliament Buildings, once defined the northern state in terms of Orangeism: ‘I have always said that I am an Orangeman first and a politician and a member of the parliament afterwards …All I boast is that we have a Protestant Parliament and a Protestant State.’

In more recent decades it was an Orange march in Derry which led to the Battle of the Bogside and the pogroms in Belfast. And in the years since 1920 nationalist ghettoes in Belfast and areas outside the city have been annually besieged by thousands of Orangemen and their bands.

A report by a British government Commission 150 years ago, following the 1857 riots, provides an assessment of the Orange that could have been written this year. The Commission concluded that Orange events are responsible for ‘violence, outrage, religious animosities, hatred between classes and, to often, bloodshed and loss of life.’

That is a view widely shared today by Irish nationalists and republicans and internationally.

It is a view that the Orange disregards at its peril as a seeks a new image. 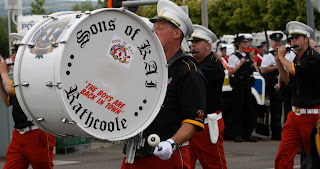 Orange marches and their cost in human, financial and political terms is too high.
No accurate financial cost has been placed on this years violence but in a reply to an Assembly question from a Shinner a few months ago the PSNI estimated that the cost of policing the parades for the period June to August in 2009 was around £2,899,770.

Five years ago the policing of the Orange parade on the Springfield Road in West Belfast and the subsequent rioting cost £3 million. On that occasion scores were arrested and ninety-three police officers were injured.

This year several police officers were shot, a police woman was severely injured after being hit by a concrete slab, and scores more were hurt during the rioting. Local residents were attacked by rioters and cars and vehicles stolen and destroyed. Some young people were also injured in disputed circumstances by plastic bullets.

The financial cost of the disturbances for 2010 will clearly run into millions and this will be paid for out of the limited resources available to the Executive.

At a time when frontline services are being cut and more cuts are threatened; when schools cannot be built because there is no money; when accident and emergency services are being slashed; jobs are being lost; and the Chief Constable is required to make significant cuts in the policing budget, it is clear that the financial cost of contentious parades for society is too high.

In addition the media reports, photographs and negative television imagery which are reproduced around the world do incalculable damage to our efforts to attract inward investment.

This unresolved problem also has a huge adverse impact on the loyal orders. In recent years they have spent a lot of time and effort and money in trying to rebrand the marching season as ‘Orangefest’. All of that is lost in the confrontations and violence around a very few number of marches.

There are almost 4000 loyal order parades each year. The vast majority pass peacefully. Only a handful result in violence.

Surely it is not beyond the wit and intelligence of all of us to find a resolution which can bring this to end. The proposals brought forward by Sinn Féin and the DUP are a means to do this which respects the rights of the marching orders and the rights of host communities.

In early May I wrote to the leaders of the main loyal orders and asked to meet them to discuss all of these matters. They have not yet replied.

I understand the difficulties that all of this presents for the Orange. But I believe that the vast majority of citizens want us to find a peaceful resolution to the marching issue.

I am appealing again to these leaders to meet with me. I am asking that they set aside past differences and engage in dialogue with Sinn Féin and local host communities affected by marches.

It is time that the issue of contentious marches was finally resolved. I am convinced that with good will and common sense we can succeed. And I believe that a proper dialogue between Sinn Féin and the loyal orders can reduce tensions and create a climate in which greater understanding can be encouraged. 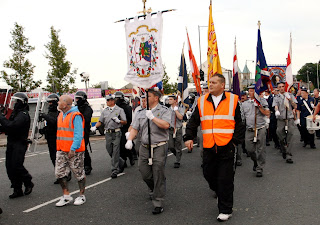 Thanks again Gerry,
I feel this is just one more point on the New human rights problems in North Ireland. It now would seem clear that under the ECHR that contentious Orange Marches are fall within the interests of national security, public safety, the prevention of disorder or crime, the protection of health or morals or the protection of the rights and freedoms of others. The need to repeal the Public Processions Act 1998 in its entirety, and to create a Bill that would bring definition of ‘meetings’ and ‘human rights’ as the center of thsi public protection.Different forms of public assembly can and should be treated differently in a true Democratic and social way. The States must not only safeguard the right to assemble peacefully but also refrain from applying unreasonable indirect restrictions upon that right. As with discretion and common sense comes regard to “human rights” as well as relevant previous failures to comply with the code of conduct. Is leor nod don eolach, and a wise man should understand the rights of others.

When religious ferver comes into it Gerry, bigotry is never far away and logic goes out the window.

We have to just keep it simple and that means defending our areas. We have a right to defend ourselves from unwanted intrusions by anti-catholic organisations, regardless of any theological debates about right or wrong religion or interpretations of the bible.

The politics of condemnation is a tool of the establishment classes, used to keep order and maintain the status kwo. We should never fall into the trap of condemning people for choosing a different means of resistance to ongoing injustice and oppression. They have every right to be angry and every right to express that anger violently if that's what they feel they need to do.

Building a consensus of intellectuals can provide the way ahead but who wants to read extensively nowadays. In the kingdom of the blind, the one eyed man is king. The oppresion is too much. The people are being twisted out of shape.

Gearóíd a chara,
I am now and probably always will be a Sinn Féin voter however I can't see how the policy of continual roadside protests will deter the Orange from parading through nationalist areas. The only times that I can recall marches being rerouted was through the Tunnel at Portadown, Garvaghy Rd and Ormeau Rd and all done after sit-down protests where marchers and police were confronted face on. I don't ever recall a march being rerouted as a result of a peaceful roadside protest. Unfortunately for the protesters at Ardoyne their protest attracts an element hell bent on destruction (which takes place after the march and carries on for days after) and deters many people, like me, who would physically support the peaceful protest on the road and who would swell the numbers of protesters to a point where the PSNI could not move them from the road. The protesters have a responsibility to ensure the people of Ardoyne that the protests are peaceful and trouble free afterwards. I believe that (peaceful) confrontation is inevitable and the only way to resolve this issue.
Páid

Gerry, Sinn Fein were quite happy to exploit people for years during the marching season.
I remember being bused to the Ormeau and other contentious places many many times.

I think this is what gets people about Sinn Fein, their sheer unadulterated hypocrisy.

Gerry, Sinn Fein were quite happy to sign up to anything the Brits proposed for the North, meagre budgets included.

According to the Socialist Party paper, Tom Hartley sat on a committee in the Royal Hospital which actively overseen ward closures.

I suppose, if you have done what you lot have done you have to have some scapegoats, the so called ' dissidents' always seem to provide a very good one.