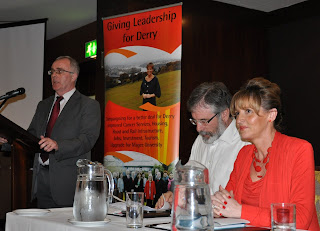 
This blog has often thought he would make a good scheduler. Most of this is based on my experience at the hands of bad schedulers.

Your man is the worse scheduler in the business. Regular readers will recall that this blog took an initiative to host a civic reception in Belfast City Hall for the all-Ireland Club champions St. Galls.

It took place on Thursday night. This blog wasn’t there. It’s entirely your man’s fault. He had me in Upper Bann at one of Sinn Féin’s Townhall meetings.

The Upper Bann meeting was really good. This blog met local activists and then separately the families of our patriot dead. And then we held a larger meeting which over a hundred or so turned out to. The conversation covered everything from the SDLP rejection of the proposed arrangement for Fermanagh South Tyrone and South Belfast to local issues, policing and justice and the impact on the peace process if the Tories were to win in Britain.

The audience in Derry

The Upper Bann meeting was my third this week. The first was in Derry on Tuesday evening, then it was the turn of Derry, Thursday night was Upper Bann and tonight, Friday, I will be enjoying the company of Pat Doherty and Barry McElduff and friends in Omagh. 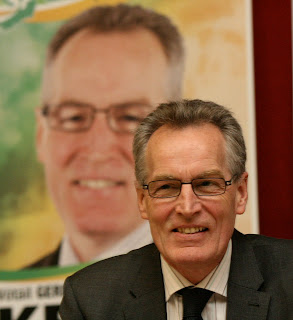 Gerry Kelly enjoying the craic at the Belfast Townhall meeting


But back to St.Galls. Fra McCann tells me the civic reception, which was hosted by Sinn Féin Councillor Danny Lavery, who is currently the Deputy Mayor, was excellent. Everyone had a great time and Tom Hartley gave the St. Galls team and their guests a tour of the refurbished City Hall. Thanks to your man’s scheduling clanger I couldn’t be there so I sent a letter of comhghairdeas which Tom kindly read out.

I am sorry that I am unable to be with you this evening. As a result of bad scheduling, I am in Upper Bann at a Townhall meeting.

I would much rather be with you to salute your achievements, no harm to the people of Upper Bann, and I tried to readjust the schedule but because I was publicly advertised to speak here I felt I couldn’t break this engagement. Mea Culpa.

I want to congratulate St Galls on becoming the All-Ireland champions, especially in this your centenary year.

St Galls have played a remarkably historic role in the gaelic tradition in Belfast and your achievements have given great heart and hope to Belfast Gaels and all of County Antrim.

No-one knows better than you - hurlers and footballers - what is involved in reaching and performing in an All-Ireland final. But no-one deserves more than you to be the all-Ireland club champions.

You won the all-Ireland because you deserved to.

It wasn't luck; it wasn't a fluke; it was by dint of years of hard work, good management and mentoring, self belief, pride in yourselves and your club and brilliant footballing skills.

Well done to you all.

Your mentors and managers and especially your families, know how much is required to build a successful gaelic athletics club.

So while this is a night for the players, it is also for the entire Naomh Gall club family.

This event is one way for the citizens of this city to officially and formally thank you. And to salute you.

Belfast Gaels have a proud record of achievement. This has been accomplished despite the fact that Cumann Luthchleas Gael has not been cherished and supported by Belfast City Council as it should be. But this also is changing.

Sinn Féin is determined to ensure that all the civic institutions and public bodies in our society respect, reflect and properly resource our Gaelic games, language culture.

This is about rights and entitlements, and ensuring that Belfast becomes a city for all its citizens.

So welcome to OUR city hall. Tonight Belfast City belongs to Naomh Galls.

However, it is not only in this city that the gaelic games and culture deserve to be embraced and enjoyed.

That is why I have asked the Minister for Arts, Culture and Leisure, Nelson McCausland, to host an event at Stormont to honour your club. As soon I receive a response to my request, I will be in contact again with your club officials.

That is one event our schedulers won't mess up. Me and Nelson will be delighted to see you all up on the hill.

I hope that in the season ahead, we will have other reasons to come together to celebrate

Good luck with the rest of your evening. 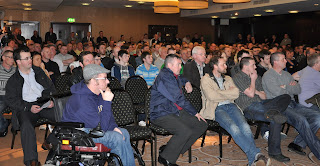 The Derry crowd and Bill Groves
Posted by Gerry Adams at 10:44 AM

They have a good 7's side as well, I watched them a few times in Dublin

Fair Play Gearoid. Tis is the St Galls amadan from a few weeks ago who seemed to touch a sore spot considering your response. Ta bron orm - no offence intended. Being a Gall but son of an ardent johnnie i just couldnt resist the dig. I commend you on the city hall reception for the team and wish you good luck with Nelson !
Slan
Naomh Gall Amadan

Have a good meeting in Omagh, I have spent a nice afternoon going about the small college there.The Technology Incubation Centre ,was very interesting , and could be use to promote Irish in general.Centres like this institution along with other public bodies in Irish society can get the respect.The Technology Incubation Centre could add there resource with Irish language and culture.
In the end it is all about people.gach duine, good post Gerry,