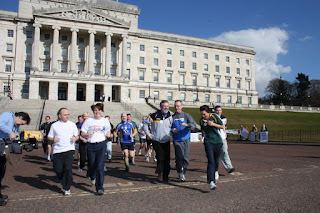 On Saturday evening as dusk was falling and as I made my way into the RDS to make my speech at the Ard Fheis what do you think I spied dandering out of the Lansdowne Road Cricket Grounds? A fox. An madadh rua.

Although the fox is the bane of the poultry farmer and seen by many farmers as a pest, I have always been excited by the sight of this wild animal.

Until now my acquaintance with an madadh rua have been on mountainy slopes or green pasturelands.

Now Reynard strolled with a cocky nonchalant air down on our main streets as casual as any city slicker taking a stroll before bedtime. We drove alongside him for fifty yards or so before he vanished as magically as he had appeared, leaving us to marvel at the wonder of it all.

Now it's Tuesday. This Blog is sprawling on the bench of the Seomra mór ag Stormont listening to the debate on policing and justice.

Funny how the Landsdowne Fox is still meandering through my imagination.

This is also Seachtain na Gaeilge – the week of Irish – which quite properly lasts longer than a week. Appropriately enough this Blog and Séanna mór commenced Seachtain na Gaeilge by meeting the Minister of Culture, Arts and Leisure, Nelson McCausland for a discussion on the upcoming Irish language strategy promised by the Minister. More of that as it emerges.

Today also sees the commencement of Rith 2010 – a 1600 km relay-run across Ireland which will raise money for Irish Language projects throughout Ireland. The relay-run begins in Belfast and will last 9 days, finishing in Galway on St. Patrick’s Day March 17th.

The Sinn Féin Assembly team did our bit from outside Parliament Buildings at lunchtime today. Several thousand participants are expected to join in along the route which will see the runners pass through 250 towns and villages.

This is a unique event and innovative way to increase awareness and support for the Irish language as well as to raise money for Irish language projects.

A specially carved baton, made from Irish bog oak and containing a message of support from President Mary McAleese will be carried on the journey. It will be opened and read at the end of the run.

People taking part will secure sponsorship and it is possible, like this Blog, to buy a kilometer as part of the fund raising effort. This Blog purchased a kilometer.

Seachtain na Seachtain na Gaeilge is the annual international festival organised by Conradh na Gaeilge to promote interest in and support for the Irish Language. It’s about celebrating and enjoying everything Irish – from the language and music, to culture, food and drinks and sport. All across the island there will be events held, including street céilís. 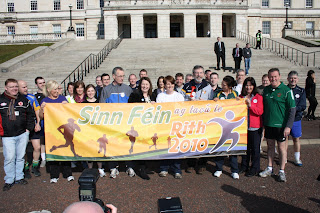 This Blog is especially keen on the Irish language. There is a great joy in being able to speak Irish. My conversational Irish is getting better. And I consciously try to learn a little bit every day. Rosie McCorley sends me an ‘Irish word a day’ by email.

Perseverance is the key. Use what Irish you have. I’m still not proficient, but I get great satisfaction in the number of people who will now speak Irish to me.

This Blog is especially proud of the fact that in West Belfast, which has its own thriving Gaeltacht quarter, that it is possible to do all my local business through the medium of Irish, from buying papers, getting a haircut, shopping, having a pint or a cup of coffee.

My grandchildren and many of my nephews and nieces speak to me in Irish and some of the children in the street have never spoken to me except in Irish.

Language is not a spectator sport. Language requires learning, whether it is done as a child, in school or as an adult. The almost complete destruction of the Irish language took place as part of a policy decision by the British to eliminate the Gaelic way of life in their first colony. The belief that “as the tongue speaketh so the heart thinketh” decreed that any social or political discourse in Ireland must be in English.

Despite this, elements of the Gaelic way of life persisted in many parts of Ireland up to the nineteenth century in one form or another, but by then the language had become the language of the poor, mainly rural and marginal regions.

Today interest in the Irish language is growing and many young people
North and South want to speak Irish. The census figures published in 2004 record that there are 1.5 million Irish-speakers in the Twenty-Six Counties, an increase on the 1.43 million Irish-speakers identified in 1996. The last census in the Six Counties recorded Irish-language-speakers at 23 per cent in West Belfast and 16 per cent in Derry – and it has grown since then.

Much of this is down to the work of Irish language activists. However, Caitriona Ruane in her time as Minister of Education has put significantly more funding into the Irish medium sector and most recently this Blog successfully negotiated a package of money for the Irish Language Broadcast Fund and for other infrastructure projects. But the reality is that there are still major factors which work against the language, including the absence of a coherent government strategy for its promotion and the 1737 Act which prohibits the use of Irish in the courts.

So there is still a lot of work to be done. Seachtain na Gaeilge is a part of this. Well done to everyone taking part over the next few weeks.

Irish Word of the Day: This can be found on info@transparent.com
Details on Seachtain na Gaeilge can be found at www.snag.ie.
Posted by Gerry Adams at 4:11 PM

Good article gearoid im learning our language my second class is this week, i think ill keep learning and not get involved with rith as it carries a message from someone who wants the english monarch to be lauded in dublin in 2011 five years before we trow the shackels of he slavery off in Irish freedom so no ill give that a miss, as for the fox well his life was on the line in one of the motions i hope u voted to save him slán chara.TAL

Cool that you saw Reynard taking a stroll down the street!

I got a "tweet" today from Conor Murphy about your lunchtime 5K run around Stormont. Good to know about Seachtain na Gaeilge--I'll pass the information and website along to a friend who's learning Irish.

I like foxes too, in fact, I love all animals, but I do have fantasies about shooting pigeons with an air rifle, to get rid of them. I would never do it though.

When I was a young lad in Ireland, I shot plenty of things. That was the culture of the day gone into overkill and I changed away from that over time.

I thought that there was an R in Madradh Rua.

It's good news that you have a Gaelacht quarter in Belfast. Dublin needs one as well.

Also, I always resent doing business with people who are prejudiced toward me as a republican and discriminatory as well, when I am in places like Dublin, and I would like the opportunity/right to be able to make my purchases/subscriptions etc... in a validated republican friendly business participating scheme.

I'm all for trying to understand peoples prejudices, and all that side of it, but, so many years down thew road now, I shouldn't have to be continually subjected to this. It's wrong and it's unacceptable.

Your Ard fheis speech ended in that lovely Irish phrase.. not just defiant words but words of a reality that is as inevitable as night follows day.. "Tiocfaidh ar la"

I keep getting sucked into your blog.Years ago An Phoblacht ran very basic Irish for complete beginners and the phonetic way of saying it as well.I know they still do the language. Is there any chance of going back to the basics.Also the BBC do a good website site on learning the language.http://www.bbc.co.uk/northernireland/irish/blas/learners/

Maybe in the end , only change comes with Perseverance. The Acts of commitment, hard work, patience, and endurance, all the keys of change and education.The virtue of Perseverance,and the rewards for those who persevere are many and exceed the pain that must precede the victory. Language is a particular kind of system for encoding and decoding information. It is individuals who change the world, and words are often the tools that work.