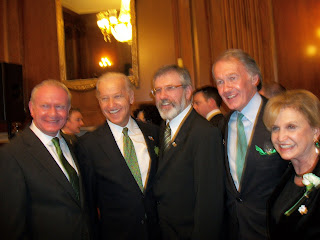 
So here we are again. The sun is still shining. The sky is still blue. And the train is just now sliding gently out off Union Station in Washington and beginning its rolling singie-song passage to New York. This blog, your man, Ms O Hare and other wandering republican evangelists are starting the long journey home.

It has been a good visit. No matter how this blog feels when I start these trips I always feel uplifted at the end. The connection between Ireland and Irish America is electric. And contrary to the image of dewy eyed sentimental Americans with an outdated view of Ireland so often depicted by sections of the media those Irish Americans who I meet are clued into what is happening back home. In fact in these internet times people in the USA can get overnight news from Ireland before people living in Ireland. 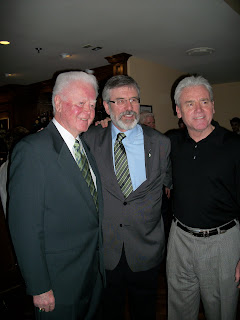 
So our events in Washington were filled with informed supporters of the Irish peace process and a united Ireland. The Friends of Sinn Féin lunch was a huge success with a very big delegation from the Labour movement. Terry O Sullivan spoke wonderfully well. Given the devastating effect of the recession on working people here the support from the trade unions is clear evidence of the connectiveness between the Irish cause and organised labour in the USA. Jimmy Hoffa, Sean McGarvey, Joyce Flynn, Jack Aherne and Chick O Donahue were among the leaders in attendance. And all the Kellys.

Then the Speakers Lunch. And later the White House Reception. The Taoiseach and the US President made good humoured speeches. This blog noted President Obama’s remarks on immigration. He spoke of … “Fixing our broken immigration system. And that’s why my own commitment to comprehensive immigration reform remains unwavering.”

Sinn Féin supports immigration reform which would provide a visa for the undocumented Irish.

There are many thousands of undocumented Irish living and working in the USA who have built new lives and are contributing positively to that society. This blog meets many people who are in this position. In Boston at the weekend some raised concerns about the length of time spent in prison by Irish citizens who are detained for an overstay of their visa and who have no criminal convictions. This is a huge trauma for these detainees and for their families. It is also a waste of US taxpayers money. In this blog’s opinion those detained should be allowed to return home as quickly as possible after they are arrested. In meetings over the last few days this blog put these points to the representatives on Capitol Hill. It is an issue which we will return to again and again. For now time for some shut eye. Your man is already snoring gently. We have many hours of continuous travel before us. A kind of republican movement. I will leave you with a quote from George Washington which President Obama used to close his remarks at the White House last night.

“When our friendless standards were first unfurled, who were the strangers who first mustered around our staff? And when it reeled in the light, who more brilliantly sustained it than Erin’s generous sons? Ireland, thou friend of my country, in my country’s most friendless days, much injured, much enduring land, accept this poor tribute from one who esteems thy worth, and mourns thy desolation. May the God of heaven, in His justice and mercy, grant thee more prosperous fortunes, and in His own time cause the sun of freedom to shed its benign radiance on the Emerald Isle.”

And so say all of us. Slán……And well done to Saint Galls. A worthy victory.
Posted by Gerry Adams at 4:17 PM

Bit of the blogs johnnies bias coming out- St galls bringing Andy Merrigan home to West Belfast for the 1 st time deserves more than 1 line !!!! Still a bit sore about the johnnies losing to Thomond college way back then me thinks !!

Terry O Sullivan is awesome. You've got to love someone whose motto is "organize or die".

In his own time cause the sun of freedom to shed his benign radiance on the Emerald Isle. What great lines from our greatest president.Its a shame we don"t have a man like him today in America. Have a safe trip home. Ed F.

I trust you have made Long Day's Journey Into Night, or the night plane home. I see from your post , you have been very had at work. As Eugene O´Neill stated in Long Day's Journey Into Night:"The past is the present, isn't it? It's the future, too." Act 2, scene 2 . This maybe how America is and how it can view Ireland , as the Past and Future.
Thanks for the post Gerry, good works one more O'Nell quote "None of us can help the things life has done to us." Act 2, scene 1