Celebrating 125 years of the GAA 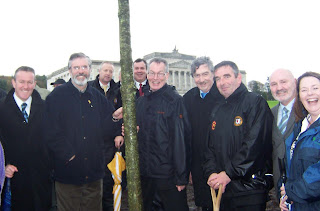 Celebrating 125 years of the GAA
Anyone can hold an event in good weather. It takes real endurance to do so in the face of a ‘severe weather warning’ from the Met office including high winds, torrential rain and bitter cold.

But that’s exactly what a small group of us did on Thursday afternoon in the grounds of Parliament Buildings. We gathered to dedicate a tree to mark 125 years of great work by An Cumann Luthchleas Gael.

There is a good story about how we got the tree that we got but é sin sceal eile. Suffice to say the necessary advance work was done, particularly by Maire from our office. She also plays football for Carrickmore and she and the Stormont Estates managed our event wonderfully well.

Tom and this blog unveiled a small plaque, the tree was dedicated and very short speeches were made praising the enormous contribution the GAA has and is making to Irish society.

A short distance from where we gathered Unionist leader Edward Carson looked down at us from his plinth.

He has witnessed some strange events since he was first erected in 1932; including the blocking of the estate by farmers and their tractors during the UWC strike in ’74 and the sight of a Sinn Féin convoy of cars driving up the main road to take part in our first meeting with British officials following the ’94 cessation.

But I’m sure as a hurler for Trinity College in Dublin he would have taken some pleasure from this little ceremony of thanks for the hard work of the GAA over 125 years. 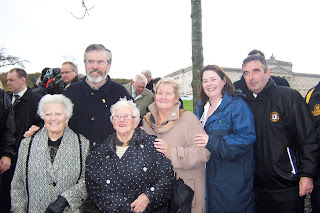 It was a nice ceremony and a well deserved tribute to a great organisation. The positive role of the GAA in Ireland and the diaspora has been enormous. The GAA brings together individuals and communities like no other organisation. It embodies a spirit of pride and identity which enthuses and motivates.

The founders of Cumann Lúthchleas Gael could not have envisaged how it would develop. But I’m sure they would be proud of everything that has been achieved.

A century and a quarter later Gaelic sports are thriving, both because of their sheer excitement and local pride, but also because of the community participation from the club level upwards.

Other factors such as televised games, fashions (with an increase in the popularity of sporting clothes, including GAA tops), and the GAA promoting itself to popularise the sport, means that there is an increase in the level of participation and interest in Gaelic games.

In this atmosphere that Gaelic games can only continue to grow and grow. From its foundation 125 years ago to today the GAA has demonstrated again and again its capacity to unite communities, to empower and encourage our young people, to uplift and inspire and to bring great joy to citizens.

This blog is very proud to be a member of this great organisation and I wish it well during its next 125 years.

A few weeks from now, on December 5th, I will be back at another tree planting event in the grounds at Stormont. The Ulster Camogie Council will be planting 1,000 Ash trees. The project is in support of the environment but is also intended to stress the importance of Ash trees in the making of hurls and camogie sticks.

Present at the dedication event on Thursday was John Hurson, from Tyrone. John has been fiercely active in support of the Palestinian people, particularly in the Gaza Strip. John was telling this blog about his plan to establish a GAA club in Gaza within the existing Gaza Sporting Club. Noam Chomsky, internationally renowned philosopher and political activist has agreed to participate and John has also secured the support of GAA activists, including Peter Canavan. This blog fully supports his efforts.

I wish John well. The situation in Gaza grows worse daily. The conditions for people living there are dreadful, and especially for the young people who make up the majority of the population.

Sport is hugely important and can help lift morale and bring enjoyment and fun into an otherwise bleak situation. Equally important is the solidarity work which goes on daily to highlight the desperate situation in the Middle East. 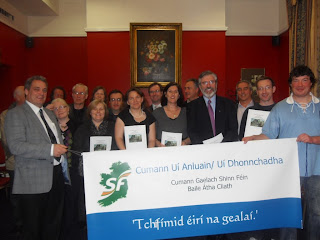 On Wednesday evening I spent several hours in Dublin speaking to a group of Irish speakers at the launch in Irish of my report of a visit to the region. Aengus O Snodaigh, who has also travelled to the Gaza Strip and faced the wrath of the Israeli Defence Forces seeking to sustain their illegal stranglehold on the area, also addressed the meeting. Colm Ó Snodaigh (from Kíla) and Cormac Breatnach played a newly composed lament for Palestine. It was a very good and informative event. Nollaig Ó Cionnaith rounded off the evening with a few lively Irish traditional tunes.
Posted by Gerry Adams at 5:18 PM

Don't forget the march in Dublin tomorrow Sat
To mark the International Week of Solidarity with Palestine there are a number of events planned in Dublin on Saturday 14th November in Dublin.

▶Assemble at the Spire (O’Connell Street)

The Ireland Palestine Solidarity Campaign will be holding a national rally for Palestinian Rights in Dublin on Saturday 14th November at 2pm, The Spire, O'Connell Street, Dublin. The rally will feature a speaker from Gaza and activists from the West Bank village of Bil’in, where Palestinian, Israeli and international campaigners have united to oppose the Israeli Annexation Wall, which will cut through the village’s land.

Following the rally there will also be a press conference at 4pm in the Teachers' Club, Parnell Sqaure. Peter McLoone, IMPACT General Secretary and Harry Browne, journalist and academic in DIT will speak at the press conference alongside representatives of the IPSC.

The rally is part of the International Week of Solidarity, 9-16th November, called by the Palestinian Grassroots Anti-Apartheid Wall Campaign. In Ireland the Week of Solidarity has involved an island-wide itinerary of events which started in Cork on Monday 9th November including film screenings, public meetings, fundraisers. The events will include a National Demonstration in Dublin on 14th November followed by a public meeting at 4pm in the Teachers' Club, Parnell Square. For a full listing of events see www.ipsc.ie/wos2009

The IPSC has used the week to highlight the Boycott, Divestment and Sanctions (BDS) movement, with specific reference to the ongoing role of Irish construction company CRH (formerly Cement Roadstone Holdings) in the building of the Apartheid Wall and illegal colonial settlements in the West Bank.
Speaking of the week, IPSC chair, David Landy said ‘This week we have successfully promoted many different voices that have shown solidarity with the Palestinian people. We have held meetings all over the country with many different groups and have managed to raise awareness among mainstream Irish civil society of Israel's apartheid policies, the ongoing plight of Palestinians, and their heroic struggle to resist oppression.’

Hi Gerry, From the looks of the photo it looks like you gave one of you wet suits to Gerry Kelly. The GAA is such a great organization for all and most of the Irish sports played on the Island have taken hold in America. Not as organized with all the local towns but mainly the Irish who grew up on the sport. Here in Montgomery county we have quite a few teams. They don"t start as young as they do in American sport but they are slowly taking hold. E.F.

There won't be a cow milked in grounds of Parliament Buildings tonight,Gerry. May be this said it best:" There are some things in life that are more important than money and the GAA is one of them."~
Joe Brolly It is a nice world in some ways when we can see a truth and joy of people , we meet and just have a good time, without hate or fear. Teh GAA has done a good job if nothing of bring people close.
Nice Gerry,