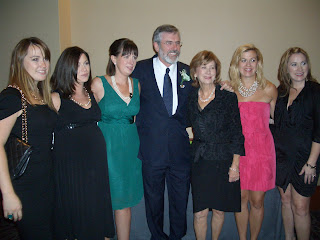 With Mike's Wife Bernadette and their daughters.

This Blog comes to you from Philadelphia. I am here to speak at an event to honour my friend Mike Doyle. I was to come to the USA earlier this week for a round of engagements in Washington but I postponed those because the current effort to get policing and justice powers devolved takes primacy at this time.

Mike died last Christmas Eve. I couldn’t believe it when I was told.

My thoughts were immediately with his family, with his wife Bernadette and daughters Mary, Denise, Loretta, Kathleen and Erin and their son Michael, his grandchildren and family circle.

But they were also with his friends and colleagues here.

With those who served with him in the police service; those who worked with him as one of Philly’s best known and most loved Irish publicans; those who laboured with him over many years in support of the cause of freedom and justice in Ireland; and all of those who were touched by his great humanity and kindness.

Philly was for me always one of the high points of any visit to the USA. I remember, like it was yesterday, arriving in Philly on our first big tour of the USA in the autumn of 1994. We were wrecked. It was a long and exhausting tour from one side of the USA to the other and back again.

Mike put us in the flat above the pub. He made us comfortable and at home. And as we relaxed, fed and watered and tired, we lay around the tv and watched a video of Shawshank Redemption. It was a restful, secure evening of camaraderie among friends made possible by Mike’s generosity.

After that Mike and his close knit group of activists always had the Irish tea and homemade scones ready for us when we arrived. The good humoured banter between them belied great friendships that had endured for decades. The stories of their adventures in Ireland were the stuff of legend and hilariously funny – as much as because Mike told them with a straight face.

When news broke of Mike’s death last Christmas Eve there was profound shock in Ireland among his many friends in the republican struggle. It was difficult to comprehend his passing. He was one of those stalwarts of the struggle.

Mike believed fervently and passionately in a United Ireland and was vocal and active in his opposition to injustice and partition.

He was a figure of great strength and commitment who always seemed to have been there through the grim and dark days of conflict and the better days of the peace process.

Mike worked away unselfishly in support of embattled communities occupied by British troops; in support of prisoners and their families and children; in support of justice campaigns; he raised money; and opened his door and home to strangers.

Among those strangers was my friend Joe Cahill with whom Mike worked very closely over the years through Noraid and with whom he developed a close and enduring friendship.

For all of this he never looked for thanks or praise. He did what he did because it was the right thing to do. In fact he would get very embarrassed when I would single him out at events to thank him for his efforts.

Mike’s death has left a great void in all our lives and in the lives of his many, many friends in Philadelphia and in Ireland. He epitomised the best of Irish America. Through hard work and business acumen he did well in Philadelphia.

He never forgot where he came from; visiting his home place of Castlerea, County Roscommon regularly. He helped people arriving in the Philly area to find jobs and was a friend to more recent immigrants. He never faltered on a commitment, no matter how large or small. 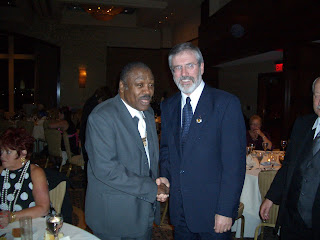 With Joe Frazier at the Philadelphia event for Mike

On Monday of this week the US Secretary of State Hillary Clinton was in Belfast spelling out the US administrations support for the peace process and for the transfer of powers on policing and justice.

Her presence and the engagement by this and past administrations, and the positive contribution they have made to the peace process, is very much down to the hard work and tenacity of Mike Doyle and the thousands of others like him who have kept faith with the cause of peace and justice in Ireland.

We will miss him.

Mike Doyle made a difference.

Hi Gerry, What a great tribute to Mike and his family.All the accolades in the program from his many friends show what a great man he really was.Its always nice seeing you and Richard and even Rita, who proclaimed to me that next trip she will try to stop smoking. E.F.

Thanks again Gerry, Remembering Mike Doyle was a wonderful read, brings feeling of simple pride for the hard work that so many have made for a real peace and United Ireland. Mike Doyle did spend a lifetime in his calling, no easy obiation, offering a lifetime of service. A duty of moral reasons are the greatest of social forces that bends the course of history . A good remembering, Gerry of a person of action.

Dear Gerry: Thank you so much for this wonderful posting. It meant the world to us that you came all the way to Philadelphia just for the event on Friday. As sad as we are everyday about his absence, we are so grateful that we were able to celebrate his life and we are so happy that you were such an important part of his life's celebration. Many thanks to you always and sending our best and love to you from my mom, my sisters, my brother and myself. thank you so very much. denise doyle chambers