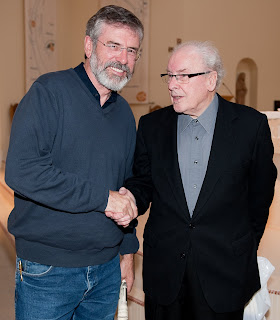 Myself and Fr. Des

August 1969 was a watershed month for citizens of Ireland, and particularly for people living in the North, especially in Derry and Belfast. A series of protests across the six counties to relieve the people of the Bogside, under siege by the RUC and the B Specials, culminated in the Belfast pogroms when these forces attacked nationalist neighbourhoods particularly in Ardoyne and the Falls.

Late one evening in August I was at the top of Springhill Avenue, in west Belfast with a small group of local people . There was widespread tension throughout the city and rumours of shootings and petrol bombings were rife. All was quiet in Springhill and the Upper Springfield. Then a car came up Springhill Avenue which was then open onto the Springfield Road. Our small group watched anxiously as the vehicle approached us. When it drew alongside and stopped we watched it cautiously. There was only one passenger, the driver. I approached him warily. He rolled down his window and introduced himself. His name was Des Wilson. He was a priest.

That was the first time we met. Later that month I visited him at the Parochial House at Saint Johns on the Falls Road to discuss the developing situation. By that time most of working class Belfast was behind barricades. The barricaded areas were almost self governing. Committees, including in some cases local priests, provided local services. These involved, particularly in West Belfast, the needs of a very large influx of refugees.

That period was a defining time for many people and institutions including the Catholic Church. Some failed to grasp the significance of it all. They failed to change to meet the new imperatives. Instead they blamed the people who were victims of state violence. Bishop Philbin did this in person in January 1970, in the new church of Corpus Christi in Springhill. Des Wilson, already dissatisfied by the church’s attitude, was soon on a collision course with these conservative elements. He left the Parochial House and came to live among us.

By 1972 he had opened a community house in Springhill. By this time internment and military occupation was the order of the day, and local people, including two priests, Father Mullan and Father Fitzpatrick were murdered by British forces.

A progressive campaigning church leadership, standing firmly on gospel values could have made a huge and positive difference to the lives of people living under a very brutal regime. Such a church could have reduced the level of conflict. It could also have played a positive role in bringing the conflict to an end much earlier.

Father Des and a small group of like minded pastors argued for such an approach. Des’s philosophy is based on respect for people, a recognition of the goodness of people and the need to empower this. So it is that he became immersed in educational projects, in the arts, and in campaigning work.

He also cheered us up in very difficult times. Especially in the wake of some dreadful incidents. Indeed over the years, I formed an opinion that his vocation was to cheer us up, to uplift us in hard times. He also played a pivotal role along with Father Alex Reid and others, in the early dialogue which led eventually to the peace process.

Why do I tell you all this? It was my great pleasure last Friday to be at a special mass in Springhill, in Corpus Christi Church, to celebrate Father Des’s diamond jubilee. 60 years a priest! That’s a long time. Des wanted to thank his friends for their contribution to his life and work and he did so with great grace and humility, despite losing his notes.

The people of Springhill made their own spontaneous tribute to Des as he made his way back to the Church the following night. His neighbours came to their doors to applaud him as he dandered along. Some showered him with confetti. And this modest holy man deserves it all. 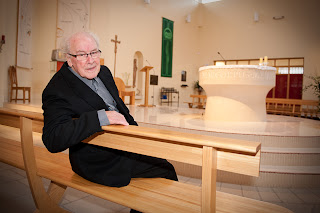 I want to thank Des for everything he has done for us and for all the love and support and blessings, but especially for the example he has given since first we met at the top of Springhill Avenue forty years ago. Tá muid fior buioch duitse Des. Is sagairt maith thú.
Posted by Gerry Adams at 12:37 PM

One of the few good ones.
When you think about it.To teach the true Gospel we are all Communists/Socialists.But it has been used as Marx so rightly said as the Opium for the people.
Good luck Fr.Des.

A wonderful tribute to a Father Des.
Thank you Gerry.

.Thank You Fr Des for your spiritual guidance When I wasn’t too sure on the direction to go while writing. Many Blessing Fr on your Anniversary… I see you are still with us doing the lords work.
Gerry this is the person that counseled me, and got me on the right track about Christine Quinn despite her quirks. Turns out she has done pretty well for NI.

My best wishes and congratulations to Fr. Des Wilson on the occasion of his diamond jubilee! And many thanks for his work "standing firmly on gospel values," from Dallas Area Christian Progressive Alliance:
http://www.dallaschristians.org/

Unfortunately Gerry, priests like Fr Des were few and far between during the dark days of the 30-year war in the north.
The ultra-conservative Catholic Church hierarchy, with one or two exceptions, kept their heads down in case they might rock the boat and in general gave appalling leadership to their flock when they sorely needed it.
The name of Fr Des Wilson will be remembered long after the names of our so-called church leaders have faded into history.
Congratulations Fr Des on your diamond jubilee, may you have many more years of health and happiness ahead of you.
Mile buiochas ar gach rud.

Father Des is one of the greatest men out there.
I do not think anyone truly knows the positive impact he has had in one of the worst situations in the world.

congratulations to fr wilson on his diamond jubilee. truly a peoples priest who stood by his community through all the dark days along with fr. hugh mullan and fr.fitzpatrick who were both shot dead trying to protect their community they were few and far between inthose awful days