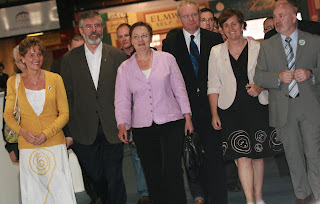 This blog has just left the count centre in Belfast. Bairbre de Brún has been elected on the first count. Bairbre is the first republican to top the poll in a European election. That’s a significant result given that it was the DUP who made topping the poll an issue during the election campaign.

I have no doubt that Bairbre will use this new mandate to continue to represent all citizens on the basis of equality and fairness.

Well done also to everyone else who stood for our party in local elections in the South, in the two by-elections and in the European contest. Thanks especially to everyone who voted for Sinn Féin. Tá muid fíor buíoch daoibhse. 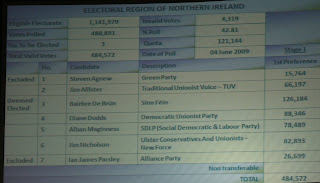 I returned to Belfast in the early hours of this morning. The last of the local government counts in the capital saw our candidate Seamus McGrattan win a council seat by beating Maurice Ahern, former Taoiseach Bertie Ahern’s brother, by 13 votes.

Electoral politics is a tough business!

But I’m philosophical about that. We have no complaints. Of course it would have been better if Mary Lou Mc Donald had retained our Dublin seat but sin é. Mary Lou fought a brilliant campaign. Our Dublin organisation responded magnificently. But we knew since the time the seats were reduced from four to three that we faced a huge challenge. Our transfers saw the election of Joe Higgins. So, well done to Joe.

As I post this blog Toiréasa Ferris is still in the contest for a seat in Ireland South. It’s too close for anyone to call it.

Overall our EU vote in the south is up. Kathleen Funchion and Tómas Sharkey did extremely well in Leinster and Pádraig MacLochlainn polled strongly in the North West.

The big losers are Fianna Fáil and the Greens. The Greens are almost wiped out at local government level.

The big winners are Labour and Fine Gael and independents

Sinn Féin had significant gains in Kilkenny, Cork, Limerick, Wicklow, Mayo and Donegal and other areas.

The party now has representatives in all but one of the thirty two counties.

The fact is we are still building capacity and organisation in the south. There are no short cuts.

The big story of the election is that people want change and parties with the capacity are obviously better placed to pick up votes from a wider section of the electorate.

Sinn Féin took a hit in 2007. We have now recovered from that. So, we need to keep building organisation on the foundations that have now been established in more areas as a result of our electoral successes.

The reality is that there could be a general election at any time. The government clearly has lost its moral authority to govern and the airwaves are filled with debate about the need for an alternative.

That’s not going to come from Fine Gael. Fine Gael and Fianna Fáil are opposite sides of the one coin on social and economic issues. Tweedledum and Tweedledee.

Enda Kenny has done a good job of building his party but those who voted for Fine Gael in the hope that a rights based, equality centred will be created are going to be disappointed.

The broad left did well. But the left is fragmented. Unity needs to be built. An alliance for change, for decency and fairness must be developed. That will take time but it doesn’t have to wait until the next election. That work must start now. In the community sector, in the voluntary sector, among campaigning groups, individual activists, everyone who wants a citizen centred society.

In local councils throughout the state parties with a commitment to equality must set aside our differences and coalesce to deliver for citizens at the receiving end of savage government policies.

Labour’s focus clearly will be to build its own organisation in preparation for a general election. Republicans will be doing the same thing. But there is no contradiction between parties building independently their structures and capacity and contesting elections as independent parties, while uniting in the common interest wherever and whenever is possible.

That’s what citizens want. It’s not enough to be against government policy. People need hope and that will come not just from rhetoric but from hard nosed policies based on core values of decency, transparency, fairness and accountability.

The people have spoken. Election day was the people's day. For the last few weeks politicians have talked the talk. Now we must walk the walk. 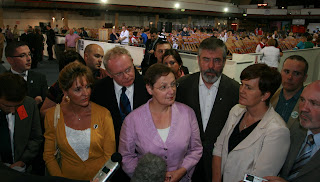 At the Count
Posted by Gerry Adams at 4:27 PM

I've been following the election results via Sinn Féin News in my email, and I was thrilled with the news that Bairbre de Brún topped the polls! And everybody else did exceptionally well, regardless of the outcome. (Pearse Doherty has a good election wrap-up on Sinn Féin's home page, for those interested in a quick summary of all the councillor's races: http://www.sinnfein.ie/)

Gerry, this line of your essay sounds just like what's going on in the States right now: "The broad left did well. But the left is fragmented. Unity needs to be built." Ugh. Tell me about it!

Well, it looks like I may be attending your conference in New York after all! There will be tons of people there, but I'm hoping I at least get a chance to shake your hand and say hi before we get down to work. I'm looking forward to hearing everybody's ideas for Irish reunification.

Just wanted to congregate Bairbre for her win and Sinn Fein for the campaign they run. Never once was this a Nationalist campaign for a nationalist vote. Bairbre rightly campaigned on representing the whole people of Northern Ireland...Protestant or Catholic.
I believe SF biggest hurdle is reminding people that Nationalism is not Catholicism. I feel very proud to be a Nationalist because Sinn Fein has remained strong in its support for equality. In contrast, I have never been so annoyed by any candidate more than Diane Dodds. She insults democracy. She is supposed to represent a party called the DEMOCROTIC unionist party. Her campaign was a protestant candidate for a protestant people. How is she going to possibly reassure the other 50% of the population who perhaps do not see themselves as unionist that she will protect their interests? I have no doubt if Diana had her way, the North would be back to the time when a Protestant parliament represented a protestant people. Irrespective of my beliefs, all people should live in a country where they are equal and have equal rights. The DUP I believe do not share this belief. They see Catholics as inferior and it is a very sad state of politics in Northern Ireland than people are willing to vote for such a belief system. The fact that Dodds would not shake hands with Bairbre shows how patheitic the DUP are. How immature.
It is great SF still have the very natural goal of a United Ireland but still remained very concerned about the welfare of the people of Northern Ireland...irrespective of religion. Having a goal to reach is vital but the present is also vital and for the ordinary person, the present is much more important than the future.
I think in this recent blog Mr Adam you have shown great respect for your competitors and an honesty lacking in many political leaders. You have not tired to sugar coat failures at the European Election results and acknowledged successes with great humility.
I recently attended one of your open discussions at Gallaby and felt honoured to hear you speak. I believe you will be rightly honoured by future generations for the commitment and sacrifices you have made towards for the goal toward a United Ireland...a campaign which began with Tone, Emmet, O’Connell...
I hope once I have completed my degree in History and Politics that I will have the honour of working for Sinn Fein.

Well, that's too bad, but she did a great job out there and maybe inspired other young people to run for office.

Gerry, I discovered a cool internet tool called Cover It Live http://www.coveritlive.com/ that might be of interest to Sinn Féin in hosting live discussions with supporters.

I'm using it right now to talk about health care with Howard Dean moderating. Users submit questions, the moderator answers answer the ones you want to.

(It also makes a clicking noise when there's a new message, so users can blog somewhere else, like I'm doing now, and go back to the discussion when they hear the click).

It's a little bit slow, but a pretty decent way to hold an almost-live discussion on a topic.

Could Sinn Féin have done any better?
Some loss and some great gains for a new view of what Sinn Féin will have to become to be the party of change.
Things are looking up in general.

Well done Bairbre and the rest of Sinn Fein. I just we had a strong republican party here in Scotland that stood up for the people... alas we are stuck with nice, soft "cozy consensus" politicians more focussed on careers than change. All the best again, Mharcus, Dundee

Well done Bairbre de Brún on topping the poll in the 6 counties becoming our only National Mep this time round,We are the largest party now in the 6 counties and must sue with that mandate all partitionists on our Island.