THE END IS NIGH 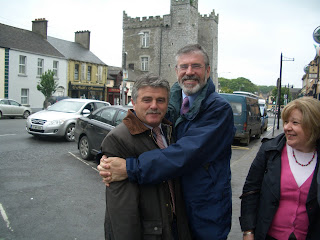 With Arthur Morgan in Ardee

THE END IS NIGH.

The election trail now has an end in sight, thanks be to God. This time next week it will be all over in the north, except for the counting. And all over in the south except for the voting. This blog, now suffering from a heavy man flu, has travelled to all arts and parts of the country and will do so again in the next seven days.

This week saw me mostly in Dublin where the anger against the government is palpable. It cuts across all sections of citizenry. The big danger is that some voters are so browned off they may not bother voting. That’s what Fianna Fail are banking on, pardon the pun. The core Fianna Fáil vote, unless it collapses completely, is still bigger than the votes of most of the other parties. So nothing can be taken for granted. Every vote counts. Not least because Sinn Féin is contesting EU seats across the island as well as local government elections in the south and two Dáil bi-elections in Dublin.

The big interest in the capital is around who will win the Euro seats. Most commentators think Labour and Fine Gael are a shoe in. If this is so then the battle will be for the last seat. And that will be between Sinn Féin and Fianna Fail. It’s still too close to call. For Mary Lou to win is a huge ask but if the goodwill can be turned into votes and the anger transformed into action then it is still do-able.

In the other Euro constituencies republicans will poll very well. Tóireasa Ferris has caught the imagination. I spent some time with her in Cork and it is clear that the young Kerry activist has a way with her with the voters. Tóireasa clearly loves canvassing. And it shows. The cráic is always ninety. So lets see how that pans out on the day. 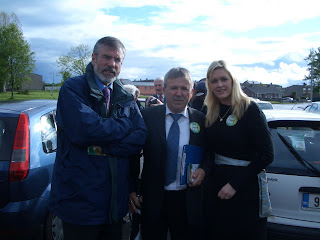 With Tóireasa Ferris and Henry Cremin in Cork

So too with Padraic MacLochlainn. Faced with a strong challenge from Padraic, Fianna Fáil panicked and introduced party stalwart and fellow Donegal man, Pat the Cope, into the race at the last minute, to the great displeasure of his running mate. On the assumption that Pat the Cope will get elected, it will be interesting to see how all that works out in the battle for the last seat.

So too with Leinster. Here another young republican woman and Kilkenny mother Kathleen Funchion is twinned with Louth’s Tomás Sharkey. They will do extremely well. 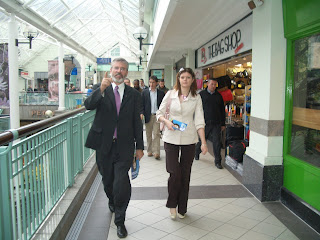 On the campaign Trail in Kilkenny with Kathleen Funchion

Which brings me back to the North. This blog came up from Dublin last night and spent the morning at Saint Georges Market in the centre of Beál Feirste with Bairbre de Brún. I bought some soda and potato farls and a home made apple cake. And some olives. And two colouring books. I nearly bought a Meat Loaf LP. Did some canvassing as well. Two outta three aint bad. Met two Mary Lou voters. Up the Dubs. Except on June 7 when Antrim play against them.

We are off to County Down now for the day. Tyrone is the last stop tonight. And then back to the capital again tomorrow. How is Bairbre doing? Go h’iontach. But like every where else, every vote counts.

And if ever there is a reason to vote it is the awful events in Coleraine where a Catholic family have been bereaved by sectarian hatred and others have been severely traumatised.

There can be no space for sectarianism if this awful viciousness is to be eradicated. Our thoughts are with the McDaid family and with the Flemings. Their suffering puts these elections in context. It also provides stark reasons for making politics work. 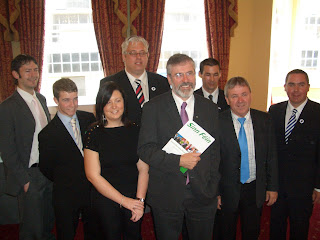 Hope you have some time to rest, Gerry, with a nice bowl of hot chicken soup--it really does help kick the flu.

Best wishes to the candidates for electoral success, and to the "browned off voters" for casting off apathy and going to the ballot box one more time.

And my condolences to Kevin McDaid's family, and prayers for Damian Fleming's recovery.

Will be keeping track of you on this important change with these elections Gerry,
so right "..no space for sectarianism if this awful viciousness is to be eradicated." Tar éis a chitear gach beart. The votes and the voters tell a story.I am in Ireland at this time. I few in to Dublin with President of Ireland Mary McAleese early this morning nice way to return to Ireland with the President returning from Boston.

oh a gerry bocht!!..heres hoping an aimsir breá will help the manflu...wouldnt it b perfect weather 4 election day...hats off 2 all our candidates,teams and cumanns for all the dedication and hard work,its sure to pay off..special mention 2 drogheda bobby sands cumann were enjoying the trail!go neírí an t-adh le gach duine..our prayers and thoughts are also with the mc daid family

I'm looking foward to seeing good results for sinn fein in the upcoming elections. I only wish I could vote there in Ireland myself but as an exile of 25 years I never have had that chance. and there's no-one or nothing worth voting for here in london. it's just a stagnent same ol' same ol' political system where the establishment still lives on the,"We won the war, we defeated fascism" line. Everything in politics here is reduced to that. Meanwhile the "have's" are secretly quite happy to turn the whole shootin' match over to the EU, i suspect.
The newsreader's woefully tell us about recession and corruption at westminster and they're absolutely coining it in their selves. soccer players are apparently inconsolable at the loss of a big match but still wake up multi-millionaires each morning. We've just gone way past the parameters of right and wrong into a kind of moral anarchy.

Get well Gerry,
reflect on the time of pushing the GFA through and the same flu symptoms you battled then.
Healthy election results will be a bit of a cure.
A bit of a red nose in a green/united Ireland is ok.

The rearing of the sectarian violence and the grief suffered, both saddens and angers me, bringing the age old question, "When will it ever end?"

More so, how can we help toward that end?
An earlier blog suggested we listen to our children and educate them in the ways of peace.

We wil never forget our history, nor the injustices, we may never get over them, but we can and will get through them.
We can live in the past/history, or seize the oportunity to make history.

To use a phrase of yours "The way forward" is to take care in what we glorify and pass on to our children.
Irish children, all children deserve the right to ride bikes etc. in streets free of armed soldiers. This is now the way, thank God and all who worked hard for this.
"Let our revenge be the laughter of our children" a quote by Bobby Sands says it all.

Best wishes to all SF candidates,and may the people vote wisely and in their favour.

Best of luck in the upcoming elections. I"m hoping for a clean sweep. Lookiing forward to seeing you and Richard in N.Y.on the 13th.Hope you can keep Rita off the quiet train. E.F.

Kate, I wondered about that term "man flu," too, but if our Gerry has to have flu at all, I'd rather he have the "man" kind instead of that "swine" variety!

Speaking of which, just dropped by again to tell you, Gerry, to take care that your staff doesn't get what you've got. You politicians are made of stronger stuff than those of us who work behind the scenes. I worked on a Congressional campaign years ago, and the Congressman infected two offices, one in D.C. and one here in Dallas. The D.C. office called us when he was in route, warning us to make him go home before he made us all sick, but there was no keeping him down. He kept right on canvassing with barely a discernable sniffle while the rest of us came down with a virulent strain of...well, I don't know what it was, 'cause I never went to the doctor for it, but it was horrible! The pictures and videos I took during that time were worthless because I couldn't keep my hands from shaking. So, keep your hands washed, Gerry, and keep your "man flu" to yourself! :)

To my namesake on this blog "Kate"
appears there are two of us.

I also asked what is man flu,
My cousin in Kerry who (guessed)
Well it's not bird/swine flu, just regular "man flu"

I'll have to go with that for now.