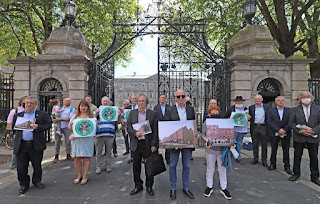 Most readers know that Moore Street in Dublin City Centre holds a special place in the history of Ireland. It was in Moore Street and the surrounding streets and laneways and at the nearby GPO that a fierce battle was fought between the 1916 republican forces and the British Army. Number 16 Moore Street was where five of the seven signatories of the Proclamation held their last meeting before the surrender. The National Museum of Ireland has described Moore Street as “the most important historic site in modern Irish history.”

Regrettably not everyone sees it that way. In the late 1990s the Moore Street terrace was scheduled for demolition. Later a developer Chartered Lands produced a plan that would have destroyed much of the site. An alliance of relatives of the signatories, of those who fought in 1916, republicans and a range of other groups and individuals commenced a campaign to save Moore St.

Their dedication to the development of the site as a cultural and historic quarter in which the 1916 buildings and streetscape would be preserved for future generations was matched by the determination of successive Irish governments to hand most of the land over to private developers for profit.

I have visited historic landmarks in other places. Robben Island in South Africa was an infamous prison where ANC and other political prisoners were held for decades under the most cruel regime. It is now a World Heritage Site. In Europe the battlegrounds of former wars are protected and the cemeteries of their dead protected and cared for. The same in the USA. I visited Independence Hall in Philadelphia where the Declaration of Independence and the United States Constitution where debated and adopted. The building is a UNESCO site and is cherished.

But in Dublin we have Irish governments with no sense of the history of their own land, no imagination, no sense of history and no vision for the future.  Only four houses -14-17 Moore Street – were adopted by the Irish government in 2007 for preservation as a national monument. 14 years later and no work has been carried out. The buildings remain derelict and sealed off from the public.

In the meantime another developer – Hammerson – has been trying to achieve what Chartered Land failed at.

The public campaign to preserve Moore Street and the 1916 battlefield site entered a new phase last week with the publication by the Moore Street Preservation Trust and the Relatives of the 1916 Signatories of their preliminary plan for the area. The plan was published several days after the British-based property company Hammerson also announced that it had submitted the first three of six planning applications it intends lodging which cover the Dublin Central site.

Connolly Heron was especially critical of the extraordinary intervention by An Taoiseach Mícheál Martin who provided an endorsement to Hammerson which they carried in the media announcement of their proposal.

Uachtarán Shinn Féin Mary Lou McDonald challenged the Taoiseach on this in the Dáil. She said: “We now have the disgraceful situation where we have a Government that ... supports a plan to turn one of the most significant sites in modern Irish history over to a private developer. Shame on the Government for taking that stance.” 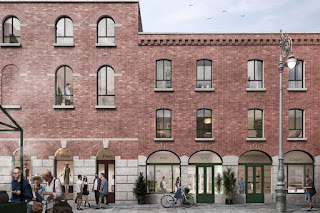 The Master plan presents an imaginative and realistic way forward for an area neglected for generations. The 1916 terrace will be restored and the ground floor shops let with over shop living facilitated. Existing ancillary buildings at the rear of the terrace will be converted for retail, cafe/restaurant use. New builds within the block will provide 45 units in mews and loft style developments, a theatre space and public meeting hall. Incubator retail units and workshops will be woven into the ground floor of these developments.

The terrace gardens will be exposed and restored for public use and the centuries old street market trading tradition, long in decline will be retained and enhanced with the re-opening of all pitches and the provision of storage and wash room facilities for the traders.

Dublin City Council passed an emergency motion on Monday evening this week adding the terrace (10-25 Moore Street) to the list of protected structures. These are the building occupied by the Volunteers who evacuated the GPO at the end of Easter Week 1916 and where the last meeting of the Leaders occurred.

The motion was proposed by Sinn Féin Councillor Mícheál Mac Donncha and was supported unanimously at the Council’s June monthly meeting. This is a hugely significant decision by the Council at a time when some of the buildings are under threat of demolition in a development plan proposed by property developer Hammerson. This vote begins the process of assessment towards listing them and as such they are now legally protected.

This column is launching a Celebrate the Good Weather While it Lasts  campaign. The CTGWWIL will endeavour to get people to express unconditional delight about whatever weather we have. Down with glum assessments about our clime and that sort of thing.

Maybe its an Irish thing. Maybe not. Maybe other people are also obsessed by the weather. Or maybe not. We Irish  all the time converse about what lies in store for us weather wise, sometimes quothing TV weather forecasters as if they were ancient prophets.

And we are usually pessimestic. Why do we describe a rainy day as “a bad day?” Why when the day is sunny do we warn all and sundry that it won’t last?

Some will even remark; “Well that’s our summer over” after a few hours of sunshine.

When I say to anyone “Its a fine day” they invarabley respond with “Aye ..... but there’s rain on the way!”

Nine times  out of ten that,  or a variation of it, is the reaction. It’s like they are wishing the sun away.

And it affects unionists as well as the rest of us. Dark clouds are non party political. Many a time even the most sunny cheerful DUP representative has greeted my “Good morning. Isn’t the weather great?” with a “Aye but it’s going to break later this afternoon.”

That’s something else that we have in common.

I’ve got to thinking that maybe people don’t even reflect on what they are saying. It’s almost an automatic response. It doesn’t help that sunshine in Ireland seldom endures. Little wonder we have  a lot of  Irish  words and phrases  for rain. But rememberwithout the rain our island would not be an Emerald Isle. But you would think we should appreciate the sun all the more when it does visit us?

So let’s give thanks for the weather we have. Especially these days when the sun brightens up everything.

He reflected for a wee while before answering. Then finally and thoughtfully he said.

“Nobody in jail in France talked about the weather.”

I rest my case. Up The CTGWWIL!

Frederick Douglass was an escaped slave who travelled from the USA to Ireland in 1845. Douglass toured Ireland speaking about slavery and telling of his experience. Douglass gave his first Irish lecture in Dublin in September 1845. Over the following months he travelled to Wexford, Waterford, Cork, Limerick and Belfast. He returned to Belfast another four times.

Ireland was in his own word “transformative” for Douglass. He said of his time here that he had become a man, rather than a chattel. He also came to see the issue of slavery not in isolation but as part of a wider campaign for equality and social justice.

Most recently she has finished work on a walking map – Frederick Douglass Way, Dublin 1845 – 1846. She is currently working on a Belfast walking map which identifies many of the locations where Douglass addressed Belfast citizens.
Among the places identified are:

Douglass’s close association with Belfast should be a matter of great public pride. This map will be an important addition to his story. Plans are also advancing to erect a statue to him.

STOP PRESS.
Dublin City Council Commemorations Committee has agreed to erect a plaque to Frederick Douglass.  It will be on the Irish Film Institute, Eustace St, where Douglass spoke when it was the Society of Friends Meeting House.

It was chosen from the Dublin venues which he spoke in because of the central role the Friends played in his tour. The building next door - the current Friends meeting house - has a plaque to the Dublin United Irishmen who met there when it was the Eagle Tavern. The Douglass Plaque should be unveiled sometime this summer. The proposal to take this initiative was put by Sinn Féin Councillor Micheál MacDonncha. This column will share details as soon as they are available.