They should stop their stupid actions 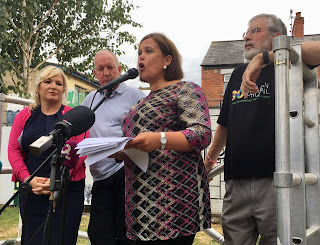 Last Friday night’s explosion at my home in west Belfast is not the first time my family have been targeted in this way. It was a carbon copy of an attack late one night in June 1993. On that occasion a hand grenade was thrown at the front bedroom window where Colette was awake watching a late night film. Gearoid was doing some late night studying for exams.


The grenade bounced off the reinforced glass, landed on the porch and exploded seconds later in the front garden. The blast smashed windows in the porch and left pockmarks from shrapnel across the wall. I wasn’t there but I heard the blast and was quickly told what had happened. When I arrived at the scene local republicans and neighbours were offering their help and solidarity to Colette.
The British Army and RUC were also there in strength. The next morning after they had left and I was clearing up I found the lever of the grenade still lying in full view in the garden. The forensic examination of the scene had not been very forensic! There were other attacks. Some involving what were described as ball bearings being fired at windows. 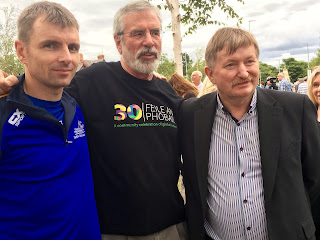 Those were dangerous times to be a republican. The previous month Alan Lundy was shot dead in an attack by loyalists on Alex Maskey’s home. In the previous five years 12 members of Sinn Féin had been killed by unionist death squads using weapons brought into the north from South Africa. Members of our families had been killed also. The weapons shipment, which was divided between the Ulster Defence Association, the Ulster Volunteer Force and Ulster Resistance, included hands guns, rifles, rocket launchers and grenades, including the one used on my home.
Brian Nelson, a British Army agent within the UDA was involved in securing the shipment and British intelligence facilitated its smuggling into the north. In the three years prior to receiving the south African weapons the loyalist death squads had killed 34 people. In the three years after the shipment arrived in late 1987 they killed 224 and wounded countless scores more. The dramatic rise in the number of Sinn Féin activists and family members being killed, attacks on family homes and Sinn Féin offices can be traced directly to this. Thankfully those days are over.
In the last two decades, since the Good Friday Agreement was achieved, most of the attacks on Sinn Féin members, families and offices have come from those generally described in the media as ‘dissident republicans.’ These actions have taken many forms. Paint bomb attacks on offices and homes, including that of Martin McGuinness. The family cars of Sinn Féin Councillors in Derry have been fire bombed and destroyed. Death threats have been issued and bomb threats against offices and homes have been made.
T 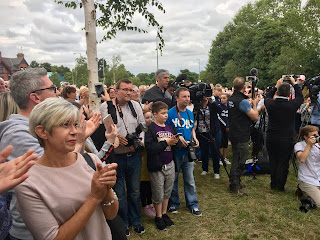 he attacks last Friday evening was the latest of these. The video footage, captured on security cameras show a car speeding up the street. It turned at the top and then came back down the street. You can see something land on the bonnet of the car in the driveway. There is an explosion which punches a hole in the windscreen and smoke can be seen rising up and covering the camera. The explosive device had got trapped between the car bonnet and the front windscreen. Those who carried out their attack could not have seen whether anyone, especially children, were in the driveway.
I don’t know who was responsible for Friday night’s attack. In East Belfast the UVF, according to the PSNI, has been poisoning the atmosphere and has involved in orchestrating street disorder, including one blast bomb attack on the Short Strand. In Derry there were days of street violence as young people, many of them no more than children, engaged in sectarian attacks against the unionist people in the Fountain estate and the PSNI.
Mary Lou McDonald, Michelle O’Neill and the Derry Sinn Féin leadership joined the leaders of other parties in the city and voiced their forthright condemnation of those responsible for the violence. They participated in public demonstrations of opposition to the orchestrated sectarian violence. Mary Lou was especially and correctly vocal. Derry she said is the city of Martin McGuinness and John Hume; it is the city of civil rights; “pensioners should not be terrified in their homes. Mothers should not be afraid to allow their children out of their front doors. And young people should not be exploited as cannon fodder to do the bidding of those with failed political and personal agendas”. 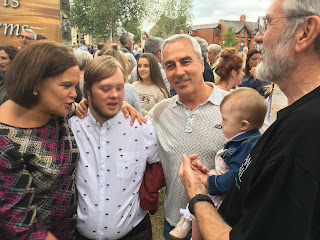 Many people I have spoken to are making the connection between Sinn Féin’s emphatic condemnation of the actions of so-called dissident groups in Derry and the attacks on my home and that of Bobby Storey. They are also angry. I have appealed for people to remain calm. I am also very thankful for the support our family and Bobby’s family have received from neighbours and everyone.
I have asked that those who were responsible for the devices thrown on Friday night, or their representatives, to come forward and to speak to me. So far they have failed to do this. Why?
Those who have bombed our homes have no popular community support. They have a responsibility to explain to me and to those like me whose families have been the target of their actions, how these actions advance Irish republicanism, if that is their contention.
The Good Friday Agreement provides a peaceful and democratic opportunity to end partition. In recent years, and especially in recent months, there has been an increasing public conversation about Irish unity. Opinion polls indicate a significant and positive shift in the public attitude toward unity. There is now a coherent political strategy; a democratic and peaceful strategy that can achieve Irish unity. That’s where the focus needs to be. The best contribution the so-called dissidents can make is to stop their stupid actions. Before someone gets killed.