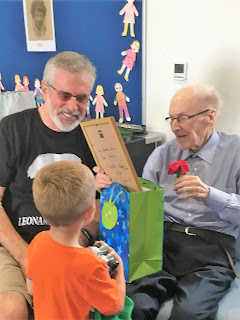 Fr. Des Wilson is a living legend. He has been an integral part of the west Belfast community for six decades. He is hugely respected and loved as a priest, a community activist, an educator, a defender of people’s rights, an author, dramatist and writer. A fear naofa. He is a man of great courage and vision, a good neighbour, and a decent human being. On Sunday he celebrated his 93rd birthday with a small group of family and friends. In recent times he has been in and out of hospital. When he arrived at the Glór na Mona Centre –  Gael Ionad Mhic Goill - on the Whiterock Road he looked frail as he gently pushed his three-wheel walker ahead of him.

But he was in great form. Smiling, laughing, joking and shaking hands and giving out hugs to everyone there. He toasted his birthday with a glass of white wine and he took great delight in blowing out the single candle on his cake. He also joined in the craic and the slagging as Ciaran Cahill played a nine-minute video showing some of Des’s life. I was intrigued by the grainy black and white film footage of a teenage Des with his family working on a farm, and film and photo images of his time as a young seminarian at Maynooth. There were scores of photos of Fr. Des from a young man in his twenties to his life in Ballymurphy and Springhill. Some of these included images of the old Springhill – which was eventually demolished following a campaign by the community, including Fr. Des.  There were photos of him with the many local people he worked closely with over many years to improve the living conditions of his neighbours. 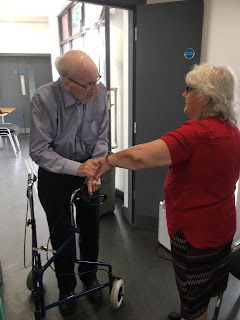 I have been very fortunate to know Fr. Des Wilson and to call him friend.  The first time we met was when I called to the priest’s house beside St Johns chapel looking for advice on a community issue. Probably at the suggestion of Frank Cahill of the Ballymurphy Tenants Association. The second time was at the top of Springhill Avenue on the night of August 14 1969. That’s a long time ago. In all those years Des’ life has been dedicated to helping people. During the terrible years of conflict, he stood with the Upper Springfield Road community against the aggression and violence of the British state forces.  I formed a view during those dark days that Des used to go out of his way to cheer us up or to raise our morale during hard times. He did this at meetings, demonstrations and in his very uplifting sermons.

He gave comfort and solidarity to those in need. Along with Frank Cahill and others he also engaged in local projects to bring jobs to west Belfast through the Whiterock Industrial Estate, the Rock Knitwear Group and later the Conway Mill project. For him education was always a priority and he was appalled at the numbers of children and young people who for a variety of reasons were dropping out of school and who needed help and support.

Fr. Des moved to St. John’s parish in 1966 after 16 years as the spiritual director at St. Malachy’s College. Ballymurphy was one of those estates constructed after World War Two to which the planners gave little thought for the families, and especially the children, who would live there. Like so many other similar developments there were initially no schools, shops, play facilities, and employment.

The new Corpus Christi church had no living accommodation for a priest. Its space was not available for community use outside of religious services. It sat like a large carbuncle, detached and aloof from the people who had paid for it to be built. Incidentally me and Paddy Root and Mickey Maguire erected the railings around the church. I never got paid but that’s another story.  Joe Cahill was the site foreman.

Allocated to Ballymurphy but living outside the neighbourhood, Fr. Des and Fr Hugh Mullan decided to move into a council house The Church authorities were not impressed and Fr Mullan ended up living in a semi-detached house in Springfield Park. In August 1971, in the 36 hours after the introduction of internment, Fr. Mullan was one of 11 people killed by the British Parachute Regiment in what has become known as the Ballymurphy Massacre. 10 months later in July 1972 the same regiment was back in Ballymurphy. This week 46 years ago they shot and killed five local people in the Springhill Massacre; three children, Margaret Gargan aged 13, David McCafferty aged 15, John Dougal aged 16, Patrick Butler aged 39 and Fr. Noel Fitzpatrick.

Fr. Des found himself increasingly in dispute with the Catholic Church authorities. He resigned from his clerical positions and moved into a council house - 123 Springhill Avenue –in January 1972. The Springhill Community Education and Development Project was born. It quickly became a refuge for the old and young, for those who needed education and counselling, and for a community under constant attack by the British Army, RUC and unionist death squads. Fr. Des, along with Noelle Ryan and others went on from there to become involved in a range of progressive community, educational, economic and anti-sectarian projects. 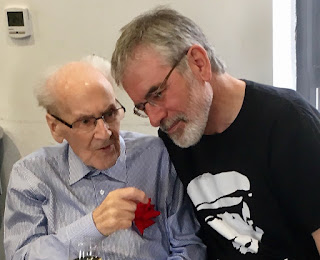 On a personal note in 1971, after internment, Fr. Des married Colette and me. I was on the run, and the times were very dangerous. Only a small number of friends and comrades knew, and we moved the date and location the night before to avoid any unexpected and unwanted interruptions by the Brits. Fr. Des married us in a room behind the altar in St. John’s Chapel on the Falls. He refused to take any money from our best man Paddy McArdle. A wise man Paddy took the money and the bridesmaid to the nearby Rock Bar.

In 1977 a feud broke out among republicans. I went to a number of priests to help to get this stopped and Fr. Des and Fr. Alex Reid quickly agreed to help. Together they established an arbitration and mediation process between the different republican organisations which undoubtedly saved lives. The two priests also embarked on an outreach programme. They spoke to unionist paramilitaries and facilitated meetings between republicans and loyalists. They also met officials from the British and Irish governments, and indeed anyone who would listen to them in the hope that through dialogue they could assist the work of peace building. They pioneered this work.

They never gave up despite setbacks and serial refusals to talk by the Great and the Good. Without Fr Des and Fr Alex there would be no peace process. Of that there is no doubt.

Fr. Des never lost his desire to help the people of west Belfast. Springhill House helped to raise awareness about the extent of poverty and deprivation in west Belfast. It produced some of the first surveys into living conditions and discrimination in employment. He championed the MacBride Principles campaign, and produced a submission to the Patten Commission on Policing in 1998. Later, along with Fr. Joe McVeigh, Fr. Des established the Community for Social Justice. One of their early campaigns was against the strip searching of republican women prisoners in Armagh Women’s Prison.

In his very popular weekly column in the Andersonstown News, which he wrote for decades, Fr. Des challenged the political and religious establishments. He has also written several books and pamphlets. And plays.
In a talk to 4th year student at St. Malachy’s College in 1963 he said: “Our view is that the world must be better when we leave it than when we entered it; that for every day of our life there should be someone who has more to eat, to wear or to live for”.

Thank you for that Des. You have lived your life according to the teachings of Jesus. Because of that we are better people. Lá breithe shona duit. 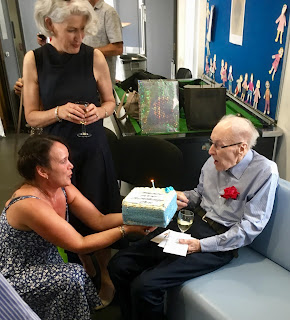