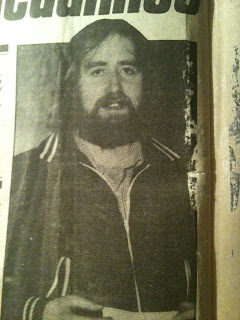 On Christmas Eve 1980 this blogs good friend and comrade, former blanket man Fra also known as ‘cuddles’ McCann, returned home after being deported from the USA.

Fra had just spent a gruelling four and a half months campaigning in the USA in support of the republican prisons on protest in the H Blocks and Armagh prisons. He had been denied a visa to enter the USA but like other ex-prisoners and republican activists who travelled to the states at that time, he entered the country illegally during the summer.

With the help of Noraid activists he travelled back and forth across the USA, from the east coast to the west coast and all places in between, talking to Irish American organisations, politicians, councils, trade unions and any media willing to listen. He did hundreds of meetings and interviews.

Fra’s courage and tenacity was uniquely recognised when he was awarded a ‘citation for bravery’ by the Massachusetts State legislature. It was the first of six states that year to support the prisoner’s five demands.

The British government was outraged at Fra’s success and at the effectiveness of the lobbying campaign. London urged the US authorities to arrest and deport him. On October 1st, a few weeks before the first hunger strike commenced, Fra and Dessie Mackin were arrested. They were held in solitary confinement and on lock-up for 23 hours each day.

Noraid succeeded in raising $30,000 in bail money and Fra was released to go back on the road. This blog thinks Desi was not so lucky. He stayed in detention. Eventually Fra was told that he was to be deported. Fra immediately applied for political asylum, a move which delayed the deportation. He continued his work until the first hunger strike ended. Fra then told the US immigration authorities that he wished to return to Ireland and on December 23rd he was put on a plane and arrived home on Christmas Eve.

Meanwhile Dessie, who was facing extradition by the British back to the north, was held for a further 18 months. He eventually won his extradition case and was deported to Dublin.

Meanwhile the first hunger strike had ended on December 18th. But by the end of the first week of January the omens were not good. At the start of the new year the prisoners had issued a statement calling for pressure on the British government to ‘ensure the speedy resolution of the blanket/no-wash protest and the defusion of the H-Block Armagh crisis’.

The prisoners warned that should the British remain intransigent ‘we will be forced to fall upon our own resources...If the British cling to the forlorn hope that they can yet break the men and women of the H-Blocks and Armagh they have but to look at their failures during the last four and a half years of our protest. We will not be found lacking in illustrating our ability and will to escalate our protest if necessary.’

So, the stark deadline in the first edition of 1981’s An Phoblacht/Republican News was one none of us wished to read – ‘Hunger-strike threatens’.

The tension escalated over the following weeks. Efforts by the prisoners to test the willingness of the prison system to implement a new regime were rebuffed. Prisoners were assaulted and personal clothes which families handed in for the prisoners were refused by prison staff. One governor told prisoners that ‘not until there is a strict conformity and you agree to wear prison issue clothes and do prison work will you get your own clothes.’

On January 16th Bernadette McAliskey and her husband Michael were shot and seriously wounded at their home by a unionist death squad. A week later this blog and hundreds more attended a major conference by the National H-Block Armagh Committee that was held in Dublin’s Liberty Hall with a view to rebuilding the public protest campaign.

On February 5th the prisoners issued a lengthy statement setting out the context for their decision and announcing that ‘hunger strikes to the death if necessary, will begin commencing from March 1st 1981, the fifth anniversary of the withdrawal of political status in the H Blocks and in Armagh jail.’

The scene was set for one of the most pivotal periods in recent Irish history.
Posted by Gerry Adams at 12:45 PM

Hello Gerry, History told first hand is clear water. We see to the bottom of the well of time. I understand the first 1980 hunger strike had no lack of volunteers,only seven were selected to match the number of men who signed the Easter 1916 Proclamation of the Republic. There are memorials and murals in memory of the hunger strikers in towns and cities across Ireland, and parts of the world. But the greatest memorial that we can give the men and women what made the Final Sacrifice is a free and united Ireland. Thanks again Gerry