Leo and the Library 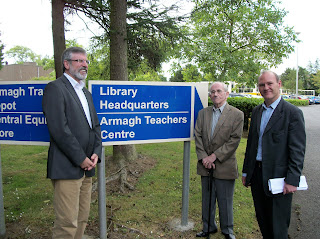 Although, in his younger days he was employed part-time in two different pubs, he still wears his Pioneer – total abstinence - pin with pride. Leo quips the small lapel pin is to prevent anyone thinking his occasional loss of balance is alcohol-related. His tentative steps belie his sharp wit and strong resolve.

In October 1964 Leo stood in the Westminster election as one of 12 Republican candidates. Sinn Féin was a banned party. Leo stood in South Antrim where he pulled in almost 4,000 votes.

Last week, he stepped into the High Court in Belfast. Leo was there to apply for leave to judicially review a decision by the Board of Libraries NI to close Leo’s local public library in Andersonstown. The closure proposal met with widespread public anger.

Andersonstown library was built in 1960. At 50 years old the current building is clearly not fit for purpose for a modern library. However, to replace a static branch with a mobile library, as is proposed by the Board, is in this blogs opinion turning the clock back to the 1950’s. It also discriminates against the 30,000 users who visited Andytown last year. What is required is a new 21st century fit for purpose library.

The Andersonstown library is at the centre of a vibrant community, within a short walk of the main Andersonstown Road. It is also a short distance from Leo’s home.

In the vicinity are two post-primary schools, three local primary schools and two nursery schools. Among these is the first Irish medium education school to be formed in the six counties, Bunscoil Phobail Feirste. It shares a site with Naiscoil Bhreandain at the heart of the urban gaeltacht founded on the Shaws Road.

These community traits are reflected in the inclusion of an Irish language collection in the Andersonstown library. Indeed, the Library authority knew all of this when it came to consider the future of Andersonstown Library.

An Equality Impact Assessment carried out on behalf of Libraries NI earlier this year noted that: “Andersonstown library is unique in that it caters for a wide Irish speaking population. It went on to state: “Libraries NI should acknowledge the need to preserve a high level of support for the Irish speaking community in west Belfast”

In the full knowledge that its decision would adversely impact on the people of Andersonstown, especially the Irish language speaking community, Libraries NI decided to proceed with the closure of Andersonstown Library.

That decision contrasted with its decision to retain four libraries which had been similarly earmarked for closure : Ballyhackmore, Cloughfern, Tullycarnet and Woodstock. Three of these are in unionist east Belfast.

The differential treatment of Andersonstown is unfair and discriminatory. In East Belfast, the Woodstock library helps serve the Polish-speaking community. To avoid impacting negatively on the local Polish community, Libraries NI decided against closing the Woodstock Library.

The way Libraries NI treated supporters of the Andytown branch is also revealing. Papers prepared for the Board obliterated any reference to the persistent efforts by Sinn Féin and local MLA Paul Maskey to keep the library open. In contrast, Libraries NI was happy to quote from unionist political representatives in support of Ballyhackamore Library, another facility earmarked for closure but then reinstated by Libraries NI, unlike Andersonstown.

So it was that last Thursday this blog journeyed to Armagh – with Leo Wilson and Paul Maskey. It was the day before the library was due to close. Our aim was to address the Board and persuade it to rescind the closure.

This was not the first effort to stop the closure. From the beginning of the year Paul Maskey has led a campaign to save it. Written submissions were made by Sinn Féin, local community groups, local schools and others in opposition to the proposed closure. At a public meeting held in the nearby leisure centre, an official account of the response by Libraries NI recorded “very strong” objections to the proposal to close the library.

When we arrived in Armagh, only two of us were allowed to address the Board. We shared the information previously withheld from the Board; highlighted the need for equality of treatment; and reminded them that more than 2,000 people had signed a petition against the closure of Andersonstown Library. After Paul Maskey and I had spoken, Leo Wilson raised his hand and asked the chairperson if he could address the Board. His request was granted and he spoke eloquently about his experience, the importance of the library for him and for the community. But when all was said and done we later learned that a majority of the Board was sticking to the closure plan. 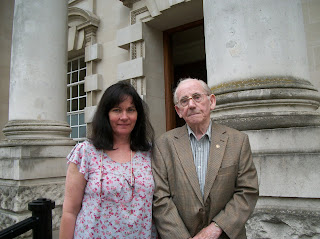 Leo and Jennifer McCann at the High Court

That’s why the following afternoon Leo Wilson was in the High Court. With hours to go before the Andersonstown Library would finally be closed, Leo sought a court injunction against closure and to have the inequality and unfairness of the decision fully examined and overturned.

This may not have been a John Grisham courtroom classic. But a double-cross was exposed. Despite having said that the library would not close until 5.30pm a stroke was pulled and the Board ordered that the library be closed at lunchtime.

The judge said it would be “unprecedented” for the courts to give a direction to re-open a public facility which had already been closed. So, the affect of the Library Boards manoeuvre was to stall the court case. It will now be heard in September.

However, Leo did succeed in securing an undertaking that the Irish language books would be kept intact and made accessible

What is required is a new 21st century fit for purpose library.

Leo values his library. He returned to third level education in his later life, and in his early 70s graduated with a degree in political science. Access to books was vital to the successful completion of his studies. Nowadays, for Leo as for many others the library is not only a source of reading but also of social contact.

Not that Leo’s quality of life or the rights of the thousands who used Andersonstown Library last year seem to matter to some in Libraries NI. So, when the summer is past, Leo will be back in court. And we will be with him. 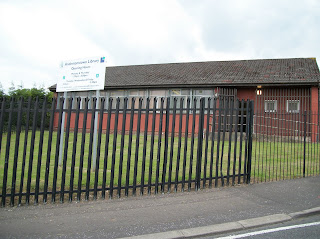 Andersonstown Library
Posted by Gerry Adams at 12:06 AM

hello Gerry, hope you made it past the 12th of July ,without to much problems, I know you put out a real effort this year.
I took note of the closer of the Andersonstown Library, thinking on the people and the importance of this community use . Having worked my way through university as student assistant in the university , I have learned that it is much more than books.
The Library can be a place for community growth, and more the center of a way of life for many. I have written on this subject and done a few papers concerning the new libraries, new technology and media and communications. The change comes with community , I feel for that community , a real unfair loss , if this a continued case.

It looks like the informal structures of discrimination are still operant, particularly at local govenmental level, even though the orange state, as it was, has been dismantled.

Is this malevolent and reactionary and if so what can we do to dissolve it in terms of our own objectives and/or ideology?

I believe I am attuned to potential ways foward and will be writing about this in greater detail towards the Fall.