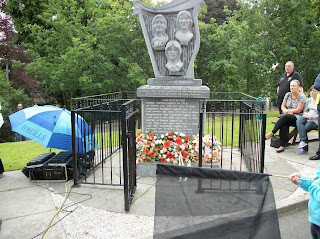 Joe McDonnell was great craic. He loved life and had a great sense of fun. He was optimistic, charismatic, a natural leader, and a practical joker. And he was a dedicated and committed IRA Volunteer who 29 years ago on July 8th 1981 died on hunger strike.

I first met Joe during internment. We were being held on the Maidstone Prison ship in Belfast Lough. The conditions were punitive and primitive. After protests by us and following the imposition of British Direct Rule it was closed. We were moved to the cages in Long Kesh. Joe was one of hundreds of men and women incarcerated without trial. And although conditions were harsh in the cages he was always cheerful.

Later when he commenced his hunger strike, four days after the death of his friend and comrade Bobby Sands, Joe sent me out from the H Blocks a King Edward cigar. Don’t ask me how he got it.

Joe was the fifth man to join the hunger-strike. He was 29 years old, married to Goretti and with two children Bernadette and Joseph.

He was born in the Lower Falls but grew up in the Greater Andersonstown area and came to live in Lenadoon Avenue where he was a well-known and very popular man.

From the day he was sentenced Joe refused to put on the prison uniform to take a visit, so adamant was he that he would not be criminalised. He kept in touch instead, with his wife and family, by means of smuggled communications –comms - written with smuggled-in biro refills on prison issue toilet paper and smuggled out via other blanket men who were taking visits.

Incarcerated in H5-Block, Joe acted as 'scarcher' (an anglicised form of the Irish word, scairt - to shout) shouting the scéal, or news from his block to the adjoining one about a hundred yards away. This was the only way that news from outside could be communicated from one H-Block to the blanket men in another H-Block.

Joe had been arrested at the same time as Bobby Sands and the two were very close. It was predictable, inevitable almost, that when Bobby died on May 5th after 66 days on hunger strike that Joe would take his place a few days later. 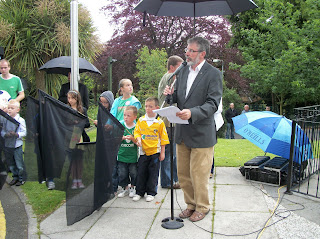 Mise speaking at the commemoration for Joe last Thursday evening

Like Bobby, Joe also stood for election. On June 11th there was a general election in the south. 9 prisoners, four of them hunger strikers, stood. It was a time of severe economic difficulties and there were many pressing issues bearing down on citizens in that part of the island. Despite that, and the fact that the political platform of the prisoners was for support for their five demands, thousands of people used their votes to back the prisoners.

Paddy Agnew and Kieran Doherty were elected and Joe came within 300 votes of becoming a TD for Sligo.

Despite this public backing the Irish government proved inept, was hostile to the prisoners and refused to stand up to the Thatcher government.

Joe died in the early hours of July 8th after 61 days on hunger strike. A few hours later Nora McCabe was shot with a plastic bullet and murdered by the RUC at the corner of Linden Street and the Falls Road.

Two days later I arrived late for Joe’s funeral having attended the earlier funeral of 16 year old John Dempsey, a member of Na Fianna Éireann who had been shot dead by the British Army.

On the Andersonstown Road, outside the building that later became Connolly House, an IRA firing party gave its last salute to a fallen comrade. As they withdrew from the funeral the British Army and RUC raided a house in St. Agnes Drive a short distance away. There was the thud and crack of gunfire and then of plastic bullets as the house and then the funeral was attacked by British forces.

The scenes were chaotic. There was a running battle between mourners and the British Army and RUC in St. Agnes Drive which spilled out onto the Andersonstown Road. Other mourners, with children, huddled in groups wherever they could to get protection from the scores of plastic bullets that were being fired. As Martin McGuinness and I pushed our way through the crowd from the front of the funeral procession the plastic bullets flew like deadly flocks of birds from the RUC land Rovers towards the mourners.

Somewhere in the middle of all this I heard that my brother Paddy had been shot. Somebody else told me he was in a Saracen which was sitting in the street. An elderly man lay on the ground in front of the Saracen refusing to let it move. It was my uncle Paddy. And then an ambulance with siren screaming flew past me. I was later told that Paddy was in that.

But despite all that was happening Joe’s funeral still had to proceed and the thousands who were there did so with the greatest dignity.

I also believe that for those today who want to know what it means to be a republican you need look no further than the men and women in Armagh and the Blocks and to the hunger strikers.

They are today’s role models. They were noble, selfless, decent men and women who demonstrated enormous heroism in the face of great hardship. They were totally committed to opposing oppression and injustice and to building a new society based on equality and freedom.

Through their efforts and those of thousands of others Irish republicanism has grown in political strength to a level unimaginable in 1981.

Two weeks ago I spoke at the Short Strand commemoration to mark the 40th anniversary of the Battle of St. Mathews. As part of those events Danny Devenny, mural painter extraordinaire, who was in the Cages with Bobby Sands, painted a new mural.

In bold words it says: ‘Understand the Past – And build a Better Future’.That’s where our focus must be. That’s what motivated Joe and Bobby and Big Doc and their comrades. And there is a role for everyone in building that new future. 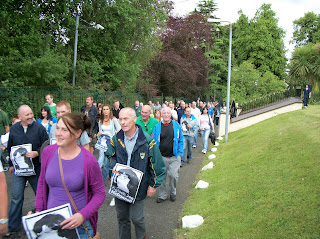 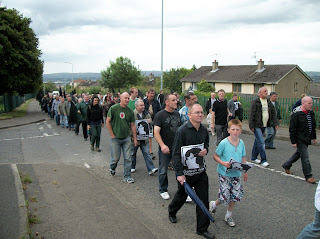 Another great Belfast man Joe McDonnell, role models , yes and more , I think.
You are right Gerry, they were noble, selfless, decent men and women , and had great dignity in the face of great hardship.
I read something the other day, and had a personal memory of my grandfather come back. As a young lad of no more the 7 or 8 years of , it was a rare thing to meet and talk with my grandfather, he lived on the other side of the country. I recalled him telling me , in a rushed voice , as if it was a very hard thing to get out of his mind.
My grandfather said: I fought the brits and they got me , I tried to fight them ,but there was to many. than he said ? they hurt him bad. This was a hard thing for him to try to tell me and for me to understand, as a child. He fought for Irish independence , and was imprisoned. In 1922 he come to the states and started a new life,.
‘Understand the Past – And build a Better Future’ It is the likes of Joe McDonnell, committed to opposing oppression and injustice , until the end, that seem to tell the story of a nation.
"He may seem the fool who has given his all, by the wise men of the world; but it was the apparent fools who changed the course of Irish history".~ Patrick Pearse

29 years, 29 years since the hunger strike of 81, most of the hunger strikers had not reached 29 years of age,
i have read your blog about JOE Mc DONNELL a few times now, unlike books on this subject you speak in a personal way, a very touching way,
some say that the election strenth was build on the sacrifice, this is said to deride SINN FEIN, but i have always found it to be a source of pride, to hear our enemys bring up the hunger strikers, for what ever purpose, means that they will never forget them either,
oppression, brit injustice, never stood a chance against those 10, against the movement, against the IRISH.
those inside the the H blocks moved a goverment, for the second time in history, goverment policy was removed by those behind the wire,
another hunger strike won prisoner rights in 1972, the brit made some mistake when they removed these rights in 1976,

while the H blocks today are gone,or empty, other prisoners still do not wear the prison uniform, or crime uniform, this is another testement of the 10,

every X for SINN FEIN is the mark of the hunger strikers, the mark of all those who are proud of that 1 simple fact, proud to be IRISH.

Thanks for putting the other side of the story. The Republican record of events is the only valid history of the conflict, in my opinion, because it deals with the micro history. The macro of history is always just a subjective collaboration of academics which never connects with the lives of the individuals that were there and the human reality of the story.

History, as told by historians and academics is really an anti-human exercise in state propaganda, designed to read well and sanitise the atrocities of the power-brokers of the time.