THE STRUGGLE GOES ON. 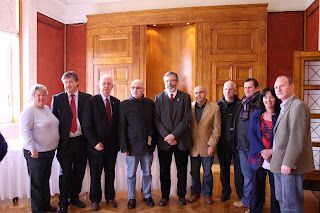 
Two matters to blog about this Good Friday. The death of an old friend and the celebration of a workers protest. A year ago workers in the Visteon plant in west Belfast occupied the factory after the management announced its closure. The shutting of the factory was a devastating blow. It was compounded by the shenanigans of Visteon and Ford in trying to strip away pension rights from workers.

The community of west Belfast rallied to the workers side and their courageous action emboldened their colleagues in two other plants in Britain. Six weeks after they began their occupation the workers marched out of the plant united and proud. They had secured from the Visteon Corporation a compensation package, which while not as fair as it should have been was much, much better than Visteon intended it to be.

This Wednesday Visteon workers held a demonstration in London and this blog hosted an event in Parliament Buildings, to mark the first anniversary of the occupation. Former workers and trade union officials came along and watched a ten minute slide show of last years sit in. This blog and union leaders, including Jimmy Kelly, the Unite regional organiser and John Maguire; Brian Burns and Charlie Maxwell spoke.

Basil McCrea of the Ulster Unionist Party and Jeffrey Donaldson of the DUP also addressed the event.

It all passed off well and the former workers enjoyed their brief visit to Parliament Buildings. But the campaign for justice for Visteon workers, and the effort to uncover the full facts surrounding the decisions taken by the company last year, are far from over.

Many facts are now well established. It is known that some of the core products manufactured in Belfast were deliberately rerouted to other locations; that a manufacturing plant in South Africa was built from nothing and began production on Belfast-developed ed parts; and that millions of pounds of assets were transferred out of pension funds by Visteon management.

This blog has been in on going contact with the Pensions Regulator. Its investigation is continuing.

I have also pressed British PM Gordon Brown to ensure that companies cannot take public money; reinvest it somewhere else; transfer assets and pensions; swap management into safe jobs; and then axe workers and their livelihoods.

So the campaign goes on. The workers spirit is unbroken. One year on, the Ford / Visteon scandal has become a badge of shame for the management. It has become a medal of honour for the workers. This blog is very proud of the campaign medal that was made in the plant and given to me by the workers. Happy Easter to them all and to their families. 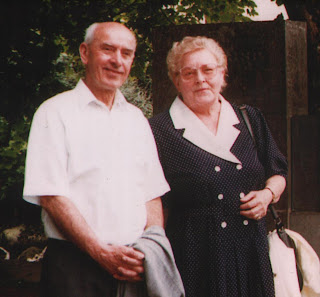 Nellie McCaughley was 85 when she died earlier this week. She was a proud republican for all of her teenage and adult life. She was also the mother of Big Eamonn who used to accompany me on my journeys around Ireland and beyond. Eamonn is married to my sister Anne. So I have known Nellie and her family for much of my adult life and was pleased to be asked to say a few words at the graveside on Holy Thursday

She was born Nelly Lidster shortly after partition in January 1925 and lived in Bombay Street in the Clonard area of Belfast. Nellie was in the Cumann na gCaliní and at the young age of 16 she joined the Cumann na mBan. She was involved with other well known republican figures of the time; women like Bridget Hannon; Madge McConville; Greta Nolan, and men like Joe Cahill and Tom Williams, jimmy Steele.

Tom was two years older than Nellie and a neighbour in Bombay Street. Nellie was one of those who helped organise the campaign to save Tom from hanging after his arrest at Easter 1942 with five other comrades for killing a member of the RUC. The campaign failed and Tom was hanged.

Nelly’s dedication to the cause of republican prisoners saw her collecting funds for prisoners and their families in the 1940’s and throughout all the subsequent decades. She was also part of all of the campaigns in support of prisoners rights, including the Armagh and H Block hunger strikers in 1980 and 81.

She visited the prisoners in the 40s. In the 1950’s when her husband Dan was interned and later in the 70’s and 80’s when her own children Eamonn and Briege Anne were in Long Kesh and Armagh.

In the 1950’s she was OC of the Cumann na mBan in Belfast and was active in Sinn Féin. She worked closely with Maire Drumm and others during that period. With the outbreak of conflict, following the pogroms in 1969 which saw her mother burned out of her home in Bombay Street, Nelly was as active as ever visiting the prisoners, raising money and being active in the street politics of the time. She was an enthusiastic member of the bin lid brigade whose early warnings of British troops in the area saved more than one republican from arrest. She was also out with other local women in hen patrols harassing Brit Army patrols.

She attended marches and rallies, was a member of the Relatives Action Committee and a regular visitor to Bodenstown where she proudly joined with other women in marching in her Cumann na mBan uniform. She active in every West Belfast election campaign since then, leafleting, canvassing and acting as a polling clerk.

Nelly loved her family. With Dan she had six children; Eamonn mór, Maura, Fionnuala, Donal, Briege Anne and Ciaran. She loved singing, ceilí dancing and camogie. My condolences to them all, especially Dan and the grand children and great grand children. Nellie was also a great cook and a wonderful baker. Until about two years ago she presented me with a lovely fruit cake every Christmas.

She made a huge difference in the lives of many, many people, especially of prisoners. This struggle has been blessed by having many brave and courageous people. Especially the unsung heroes. Our patriotic women. Go ndeanfaidh Dia Trocaire ar anam Nellie McCaughley.
Posted by Gerry Adams at 4:16 PM

Thank-you Gerry,
Two Easter Stories, set in the meaning of Easter.The Easter holiday celebrates this belief,in the rights of man and of Hope, Faith and Love. Nellie McCaughley,with gift of love and righteousness and Ford / Visteon the contrast clear to see. Many people throughout the world have been prompted to ask questions about the life, death, and message of Easter. Nellie McCaughley answers that question within her life, The rights of workers around the globe is being tested everyday, we must meet that test, for a better day to come.Bail ó Dhia ort Gerry, and a Happy Easter

What a wonderful woman Nellie McCaughley was. She had Ireland in her heart and that's a great thing, Gerry. It showed that she loved you too that she made a fruit cake for you every year. She's in a better place now and I truly believe that We'll all be together there, one day, with Bobby Sands and Joe McDonnell and Paidrig Pearse and Maire Drumm. The great republic in the sky, where no unionists or free staters will be allowed in.