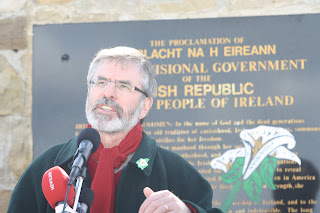 Mass first and a good decent priest doing his best to make sense of Church scandals. A time for reflection.

Then a quick visit to old friends, Seando and Patricia. Seando, who is battling illness, wears his Easter Lily with pride and poses for photographs with his clan.

Other clans were assembled also. The families of our patriot dead gathered for a short ceremony hosted by the National Graves Association. It was a moving and poignant event. The Graves do great work. I don’t often get to be in Belfast at Easter so this was a special event for me.

Then a bigger than usual Easter parade up the Falls Road to the Republican Plot at Milltown. This blog was this years’ speaker. I am posting my remarks below mar eolas daoibhse. Have a good Easter wherever you are. 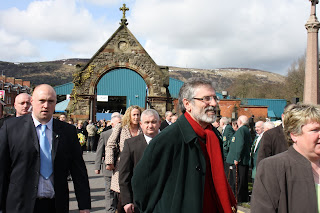 I want to welcome you all here today.

Easter Sunday is a special day. Especially here in Belfast.

It is a day to remember, to honour, and to celebrate all those republicans of our generation and other generations who gave their lives in the struggle for Irish freedom and justice.

Belfast is where the United Irish men and women committed to ending the connection with Britain.

This is the city where James Connolly organised the working men and women, and particularly the women against sweat shop exploitation.

In 1916 he went from the Falls Road to join with the Irish Volunteers, the Irish Citizen Army, Cumann na mBan and Na Fianna to take on the might of the British Empire.

This is the city where Sean MacDiarmada joined the Irish Republican Brotherhood.

This is the city where Countess Markievicz founded Na Fianna hÉireann.

This is the city visited often by Padraig Pearse and the leaders of the 1916 Rising as they worked with County Antrim gaeilgeoirí and home rulers before going on to become republicans.

This is the city of Maire Drumm and of other brave Sinn Féin activists.

The city of Mairead Farrell and Dorothy Maguire and all the other patriotic women of our time.

This is the city of Bobby Sands and Joe McDonnell and Ciaran Doherty and all their brave freedom fighting comrades of the Irish Republican Army.

We honour them all.

In particular we honour those who lie in these republican plots and in this cemetery.

They are not just heroes and heroines. They are our friends, our comrades, our neighbours, our family members.

Like the men and women of 1916 they knew the dangers they faced; the military capacity of the British state, and the subservience of sections of the Irish political establishment and media.

But they were determined to bring about change.

To end centuries of British involvement in Ireland and to construct a republic in which citizens would be treated fairly and equitably.

That goal is not yet achieved.

Ireland is still partitioned. Economic recession north and south means that nearly half a million citizens are out of work.

But the Irish government, as we saw again this week, continues to bail out its friends and cronies in the banking system and the golden circle of property developers and speculators.

NAMA gets precedence over citizens while our public services are slashed and poverty and emigration increases.

There is no more urgent time than this to promote our republican politics of equality and respect and dignity.

There is no better time to be demanding that citizens have the right to a home; to a safe environment; to good quality education and health care; and to a job.

There is no better time than this to campaign for a united
Ireland.

Republican Belfast and this generation of Irish republicans is stronger, more experienced and better supported than at any other time in the history of our city.

And Irish reunification and republican politics have never been more clearly in demand to advance and defend peoples’ rights.

I believed that when I joined the Republican struggle in the 1960s.

I believe it today.

Over 40 years ago, in the summer of 1969, progressive citizens of Belfast made a stand against the Orange state and in support of the beleaguered people of Derry. I was there.

I was also in Ballymurphy in 1970 when citizens there engaged in one of the first acts of mass resistance since partition.

And in all the time since then many ordinary people made extraordinary sacrifices and displayed great courage in pursuit of freedom and justice and Irish unity.

I am proud to have been part of all that.

During this phase of the struggle some of us had to leave our families and homes, go on the run, adapt many ruses, go under false names.

We relied totally on the support of the people to protect us.

And we, in turn, protected the people as best we could.

We did not divulge their names, their roles, their actions.

That is still my position. That was the bond of comradeship and loyalty which was forged between us.

And let no one think that I will bend to the demands of anti-republican elements or their allies in a hostile section of the media on this issue.

I am also very conscious of the human cost of the war and the great hurt inflicted by republicans.

I have acknowledged this and my regret for this many times. And I do so again today.

There are victims and citizens who want to know the truth about what happened to loved ones during the conflict.

That is their right. I cannot demand truth for victims of British terrorism, collusion or unionist error without supporting the same right for victims of republican actions.

That is why Sinn Féin supports the establishment of an effective
independent and international truth recovery process.

I certainly would be prepared to be part of such a process and I would encourage others to participate.

I am glad the war is over.

Any post conflict phase – any transition is bound to be difficult.

For all survivors, victims, former combatants.

The war should never be glamourised or repeated.

But neither should the republican involvement in it – the Army’s involvement, the involvement our patriot dead – be permitted by us to be criminalised or retrospectively delegitimised.

This is bigger than me. This is about us as a republican community, especially in this city of Belfast.

This is about our integrity and the just nature of our cause.

That is why the Irish Republican Army – Oglaigh na hEireann- was known as the peoples army.

I am proud of that Army and my association with it.

I am not a militarist and I never have been but without the IRA the nationalist people of this state would still be on our knees.

We would still be second class citizens.

So bear in mind that this relentless campaign against me is not really about me at all. It’s about trying to defeat the struggle.

During the war the might of British militarism and its unionist allies in the death squads could not defeat the republican people of this city.

The millions spent on black propaganda, the lies and smears and
disinformation and the efforts to criminalise our struggle all failed.

We stuck with our republican principles.

We perservered. We strategised and planned.

And the peoples army – the IRA - was an undefeated army when it took brave decisions to support the Sinn Féin peace strategy and to create the present opportunities for a new future.

This society, the citizens of this island would not be in the new place, a better place particularly here in the North, but for the dedication and determination of republicans.

So this campaign against me, against us, by the Irish News and Sunday Times, Tribune and others is not new.

It is about stopping our development.

So our immediate focus as republican activists is to mobilise and win the biggest republican vote in the Westminster election next month.

Building political strength and winning more and more people over to Irish republicanism is the best way to ensure the full implementation of the Good Friday and St. Andrews Agreement and in particular of their all-Ireland elements.

The key to this is leadership.

And Sinn Fein has a tried, experienced and trusted leadership. In early March we demonstrated that by concluding an agreement at Hillsborough with the DUP.

We did this by making the two governments and the DUP face up to their political responsibilities.

Under this Agreement powers on policing and justice will be transferred next week.

There will also be the transfer of powers from London to Belfast to deal with the issue of parades.

Irish language rights will also be delivered on and there is additional funding for the language.

More change is necessary but it is proof that change is possible and that the process is ongoing.

And that change is also evident every day in the efforts of our activists across this island to get investment in public services, in education and roads and rural communities.

In our defence of the elderly, our efforts to secure jobs, and houses and environmental improvements and much more.

Sinn Féin is doing all this by standing up to the governments.

By standing up for the rights of citizens.

And by making clear to the unionist parties that while we are a partner in government we are no push over.

We want to work with unionists.

This party is more active on grassroots issues in working class unionist areas of this city than at any time in my lifetime.

We take seriously our republican heritage which embraces the radical Presbyterian tradition of the United Irish Society.

And we are serious also about wanting to make friends with unionists based on tolerance, respect and equality.

We have embarked on a national and international campaign to bring this about.

We determined and resolute and confident of success.

This years Ard Fheis cleared the way for everyone who wants to, to join Sinn Féin on your own terms.

So I am appealing to everyone here to become a Shinner and to take a stand for freedom, peace and justice.

Join Sinn Féin and build a new Ireland, an Ireland the signatories of 1916 and those republicans we remember today, would be proud of.

Join with us in the fight for jobs, for peace, for equality, for unity.

Join with us we make peace with former enemies, and as we seek to achieve our primary goal of Irish unity and freedom.

And finally my friends let us send a message of solidarity to the people of Gaza.

Let us send a message to the Israeli government.

Stop the war against Palestine. Build the peace.

Gerry , I wish I was there, you seem to get better with age,clear with real understanding.A time for reflection honour those who lie in these republican plots reland ..your words. The individual becomes obligated to interpreting the truth about the individual himself. You do have a virtual presence, I was very moved . As Sinn Fein standing up for the rights of citizens and for a free, independent and United Ireland this makes political and economic sense . Great words Gerry you making headway. There is no better time than this to campaign for a united Ireland.

It was indeed a fine day all round!
Sun shining and a great turnout.
Speech was excellent ...sincere and forthright. A rememberance of the past, and a hope for our future.
Thanks