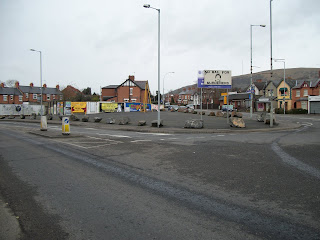 That started me thinking about the recent history of this piece of ground. Once it used to be home to a very strategically placed military structure aka the Andersonstown RUC Barracks.

It commanded a controlling point at the junction of the main roads through west Belfast.

For a long time the community around Andersonstown barracks wanted it demilitarised and demolished. With the advent of the peace process and negotiations we demanded that the land on which the barracks had been built be given back to the people of the area to decide how the site should be used.

In 2005, the people prevailed; the barracks was levelled. Since then a space has existed where the barracks once was. 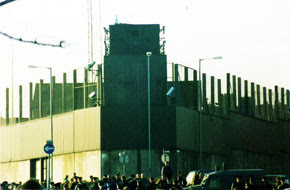 But the space and the site are still contested. For the Department of Social Development (DSD) which purchased the site, have shown as much contempt for the local community as the previous occupants of the site.

Even the concept of DSD buying the land is debatable. DSD bought something which was not the RUC’s to sell.

That was under Brit direct-rule. The land should have been gift-aided to the local community to devise and decide a future use for this site. Appointment of local Ministers ought to have seen this happen without further delay.

An early meeting with the SDLP Minister for Social Development Margaret Ritchie provided the opportunity to reiterate that case.

Rather than agree, DSD claimed that Sinn Féin and the local community never asked for the site to be ‘gifted’.

But as the minute of that meeting, and previous meetings on the issue proved, this DSD claim was false.

DSD later declared that they couldn’t gift-aid the barracks site because it would ‘set a dangerous precedent’.

This was another fraud. Sinn Féin MLA Paul Maskey dug up information which proved that DSD had ‘gift-aided’ or transferred at a nil or negligible value 40 other sites.

Instead, DSD went down a commercial route. A developer was selected by the Minister. Against the wishes of the local community, a proposal was tabled for a five storey apartment development on the site, and endorsed by the Minister.

When an effective campaign against the apartment block proposal saw the private developer withdraw, the Minister expressed her “disappointment”.

To add insult to injury, on advice from her SDLP party colleagues, the Minister directed that DSD write to the local Partnership Board in 2008 and refuse to support their community consultation on the future of the barracks site.

Subsequently, the Minister announced that the site would become a “commercial hub”. Her Department appointed consultants to fashion what this would mean.

Then the Minister told the Assembly, again under questions from local MLAs, that her favourite idea for the future of the barracks was yet another “police station”.

The latest talk from DSD is of creating an “expo centre”, although the Minister and her officials couldn’t agree whether this means a temporary or permanent structure.

Tenders for this will again be invited. DSD has asked a New York designer to help judge the final proposals. But the Minister has set out no funding or delivery plan.

After four years of dispute, more than half a million pounds of public money spent, and many staff hours, DSD has delivered nothing on site.

All of this was avoidable. The only positive activity on the barracks site has been generated by local people and local community groups. The people of the neighbourhood have already put forward suggestions like a new library; a space for holding records on the nearby graveyards; a bureau for tourists and visitors; and a space to be used by local residents for community and social activities.

Attempts to impose unwanted structures on the local community in west Belfast will always be doomed to fail. The RUC and British Army were taught that lesson. The DSD Minister and her Department must learn it too. The local community has succeeded in preventing the Minister from foisting her apartment block carbuncle upon us. We must continue to campaign to have this piece of land developed in the interests for the local community.

The west Belfast partnership Board is currently carrying out a consultation on the future use of this site. If you have any thoughts log on to www.expowestbelfast.com or contact callie@westbelfastpartnership.org
Posted by Gerry Adams at 8:01 AM

Hi Gerry, Today I read about 2 visitors who had been beaten and robbed in the Andersonstown area by a gang of teens age 15 and 16. If these kids had a center to draw them too there would be no need for them to be roaming the streets.As a youth here in Philly we had our local boys club that was equipped with a boxing ring basketball courts and even a swimming pool. We never wanted to leave the place. It worked in my very mixed neighborhood. Ed F.

Local people and local community groups, that is were the power is.The local community should devise and decide a future it would seem as well.This underscores widespread support to social change.

The decisive contribution for a group struggle ,becomes a altered stereotypical portrayal of a community.Shows the concerted effort to promote disunity among people and the social control subordination, political and economic peonage. Gerry,sounds like a new radicalism, union submerged after conservative structural mainstream.During economic downturns,brings out the isolated views that are a suppression of expression, of social needs.

People power does work Gerry and it is always needed to counter the tyranical tendancy of those who seek to give their heart and soul to their employer.

The state, as employer, becomes the surrogate parents, community, security and the money compensates for the lack of love. and anyone who gets in the way, gets crushed or even gassed.

Look at what 8,000 commited jewish activists in the US can achieve through their love of the idea of a jewish state as a homeland. The West Belfast activists can match this level of emotional connection to the creation of community but can it really be done on an all island basis? and if not why not? and why not in the Diaspora?

I believe we can, if we can regenerate as individuals and come back again and again even stronger, and above all else be willing to let go of our previous confrontations and bear no continuing resentments.

The West Belfast Irish, like the Jews, have the experience of building community through adversity. Now, the question is, can we build an all Ireland Citizen based community, through the power of Love/God, not just religion, in which groups like the DSD and such horrific overlords will be so at odds with the Nation that they will cease to exist?

I hope you guys can get a community centre/ library there, or something like that for the people, for the community, all inclusive and progressive. I will be very proud to visit such a center, if it is God's will.

Not that I have a vote, but I vote library! In my corner of the world, we have great libraries, with free wireless internet access as well as black box theatres for local groups to perform.

I also like the idea from the anonymous poster of 11:57 who recommended a really nice rec center; I agree that if you want to stop crime in an area, a good recreation center will do it faster than a whole bunch more police.

Why not do the right thing and build houses on it along with a memorial for Harry Holland.

LAST BLOGGER...that wouuld solve the problem superbly! but it would mean that no one who thinks they are important could then organise another 1000 meetings about the land bottom of the glen road.