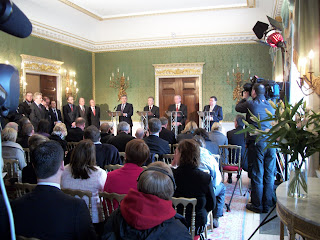 
This Blog watched as Martin McGuinness and Peter Robinson joined the Taoiseach and the British Prime Minister to set out the final piece of the jig-saw which saw agreement between Sinn Fein and the Democratic Unionist Party on the transfer of policing and justice powers and other outstanding matters arising from the Good Friday and St. Andrews agreements. It was another good Friday in the peace process.

Many had thought it wouldn’t, couldn’t happen. That the respective positions of the Shinners and the DUP were too far apart. But it did and it was achieved primarily as a result of very intense discussions between the two parties.

This was a hugely important, as well as symbolic moment. The DUP rejected the Good Friday Agreement. They have an a la carte attitude to the St. Andrews Agreement. But this agreement at Hillsborough Castle is a different creature. It is theirs. And ours. And hopefully before long the other parties will come on board. This marks a new phase in the process.

Key to this is agreeing a framework that provides for local solutions, respects the rights of those who want to parade but also the rights of those who live in those areas into which marchers wish to go. It is based on dialogue and on seeking to improve the adjudicating framework for contentious parades. No one should feel nervous about any of this. This agreement, like the Good Friday Agreement before it, asserts the right of everyone to live free from sectarian harassment. In the interim the Parades Commission will continue.

Agreement has also been reached on a process to progress the outstanding issues arising from the St. Andrews Agreement and this clearly includes the rights of Irish language speakers.

It was the Shinners who put Acht na Gaeilge on the table at St Andrews and this Blog is confident that the rights of Irish language speakers will be advanced in the time ahead. This Blog would have liked more progress on language rights. That’s one of the reasons I called the agreement a staging post.

There should be a draft strategy on the Irish language before long. The focus then will be to make this viable; with clear objectives and timeframes, and the inclusive involvement of Gaeilgeoirí to figger all this out. There is also more work to be done by the two governments in tandem with the Executive fulfilling its responsibilities to uphold the rights of those of us who wish to live our lives through our own language.

The Agreement at Hillsborough also agreed a process for clearing the backlog of Executive papers and decisions which are still pending, and advancing the all-Ireland aspects of the St. Andrews Agreement, including an inter-parliamentary forum and the consultative forum.

It is detailed and timeframed agreement.

Of course, there will be some who will rail against it. The naysayers and begrudgers will study the detail of the agreement seeking points of criticism. But they are the minority. The vast majority of people in the north and on this island want this process to work. Public opinion in recent weeks has overwhelmingly favoured a deal.

So, another agreement has been achieved and new and important progress has been made in consolidating the political institutions.

The judgement on our success however will be in whether the political process and the institutions deliver for citizens.

As the parties negotiated last week hundreds more job losses were announced in Belfast and Monkstown, in County Antrim. The numbers of those unemployed is rising; families are finding it increasingly difficult to pay mortgages and make ends meet. There are increasing numbers of our children living in poverty, while our elderly make life and death choices about heating their homes or buying food.

The reality is that for two years the Executive and the Assembly have not been as effective as they should have been in developing strategies and policies to tackle these problems.

There is now a significant opportunity to change all of that. An opportunity to build a society based on respect, equality, partnership and fairness. Sinn Féin is an Irish republican party. As Martin McGuinness said yesterday we believe in a United Ireland. And in two weeks time on Saturday 20th February we will be hosting a conference on Irish Unity in TUC Congress House in London to discuss and debate this very issue.

But that doesn’t mean that Irish republicans and Unionists cannot work together in the interests of those we represent. We can and Sinn Féin is determined to make positive use of the opportunity that now exists to do that. 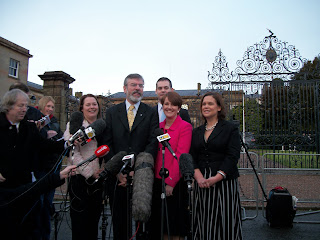 Putting Irish Unity on the Agenda
A Conference to open the debate will take place on Saturday 20 February in TUC Congress Houses of Parliament Visit: www.londonirishunityconference.org

The world had eyes on the Island , You seem to have maded a great international statement. The need for social services for all in need, a working nation to give to all,a symbolic moment.Poverty and developing strategies to deal with it. A happy day, for all the world to see. A good day yes, Gerry a good one.
The barricade awaiting so weary of soul of man, the cold desolate night ends in destiny smiling beyond the edge of hills of knowledge. well done

Maybe now you could put some efort in Putting Dublin Sinn Féin into a more efficent organisation, people are leaving in their droves,and going elsewhere.There are reasons for this and those reasons are being ignored.The people of Dublin have a yearning for a left alternative, The election of MEP Joe O Higgins proved that.DSF should be a lot further on that it is. The Labour Party is not a left wing party.Mr Gilmmoe reactons are based on what is discussed on Morning Irleand.Something needs to be done.The right are now attacking the Minimum wage can you believe it.In the An Phoblacht there are 2 good articles by Ms Spain and 1 good article by Eoin O Broin showing what is going on.
But people are not reading this, they are listenning to a Media driven agenda controlled by huge multinationals whose interests are in direct contrast to the working class . Effort need to be given in educating the people about an alternative.

gerry
As someone who has voted for yourself and party since 1983 i would like you to answer me this simple question, I am totally aware that Sinn Fein are one of the most strategic and forward thinking parties in Europe who are able to calculate the hits that they will take over a period of time during their pursuit of a certain objective . With Policing and Justice being one of those objectives can you tell me that under absolutely no circumstances whatsoever will you allow your party or anyone associated with it in anyway to allow the people of garvaghy road to be sacrraficed as a short term loss for policing and justice and the ongoing administration of this statelet by the Crowns administraitors in Stormont.?

A great deal of comment - fuelled by your own statements on RTE and elsewhere on Monday for instance - focused on what specific pledges on Irish language provision would end up in the Agreement. An Irish Language Act? An Irish language strategy, previously promised in 2007 by Edwin Poots when he axed the Irish Language Act promised in the St Andrew's Agreement?
In the end, in the document I read, there was no mention at all of the Irish Language. No strategy? No Act? Nothing.
What's the deal? Is there a deal on the Irish language that hasn't been publicised in case it might discommode Unionist political leaders? Or is it merely that the language was overlooked entirely?
We've heard rumours about more money for the Irish Language Broadcast Fund (£15m?) and for Irish language projects on the ground (£8m?).
Can you outline in detail what's been secured for the Irish language in the latest negotiations?
If anything has been secured, has the DUP signed up to it and will we see an end to the sniping from the wings by DUP and UUP politicians, denigrating the Irish language and those who speak it?
Will there be, for instance, substantial funding to develop the Gaeltacht Quarter, on a par with the funding delivered for the Odyssey in East Belfast?
I believe these are fair questions which deserve specific detailed answers. In the past my experience that such questioning doesn't feature on this website and is not encouraged. Maybe I'm being unfair - but I'd like to have my expectations of non disclosure confounded. I will post this post on Slugger O'Toole and my own website in anticipation of your early and detailed response, Go raibh maith agat....

I hope this model of face-to-face negotiation carries over to the working group on parades. If the Portadown Orangemen could sit across the table from Breandán Mac Cionnaith and the GRCC, that would really be a breakthrough.