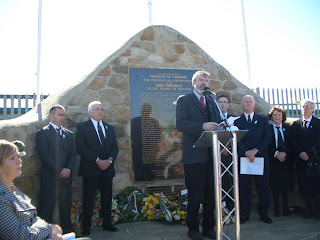 This Easter I had the honour of giving the Easter Speech at the Republican Plot in Milltown Cemetery.

Below is the text of my remarks and a few photos.

This is my second blog today. For regular readers and the curious and irregular the blog after this on Gaza should be read also.

I just returned last night from the Middle East.

I will not dwell at length on that issue today but I will be presenting a full report of the Sinn Féin delegations views of the situation there, particularly in the Palestinian Territories.

I will make this available to anyone here who is interested.

For now let me say that the situation for the Palestinian people has deteriorated, the siege of Gaza is a shameful indictment of the International Community and within our limited capacity Sinn Féin is committed to do all that we can to rectify that situation and to assist the process to bring about a viable state for the people of Palestine.

Irish republicans are internationalist and we are assembled here today to re-commit ourselves to the ideals of the 1916 Proclamation which are at the core of the Irish republican philosophy.

We are mindful also that this year marks the 90 anniversary of An Chéad Dáil - the first and only freely elected parliament of all the Irish people.

This year also marks the 100th anniversary of Na Fianna
Éireann, first founded in Belfast by the Countess Markievicz and Bulmer Hobson. Later this year we will celebrate the 40th anniversary of the Battle of the Bogside, when the citizens of Derry defeated the RUC assault on their community and signalled the beginning of a popular uprising against the Orange state. Belfast republicans will also reflect on events in this city at that time and particularly on the Belfast pogroms of 1969.

But for now at this Easter ceremony, it is suffice to assert clearly and truthfully that while we have yet to win our freedom, the Orange state as we knew it is gone.
It may take time for some unionists to catch up, but their leaders know that there is no going back to the old days of sectarian domination and two-tier citizenship.

The relationship between the North of Ireland and Britain has also been fundamentally altered and an increasingly confident republican community is taking co-ownership, as is our right, of every sphere of public, political and institutional life here.

And importantly a peaceful and democratic path to a united Ireland has been opened up. But that does not mean that we republicans can sit back and wait for the British government to do the right thing for Ireland. We need to organise for freedom.

The British government will only leave Ireland, when the Irish people – together – demand that they leave. 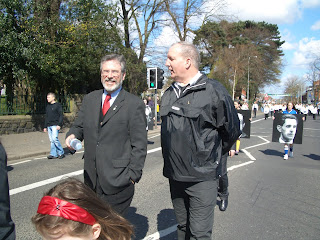 Sinn Féin’s historic duty is to popularise republicanism, and to mobilise the Irish Diaspora across the world behind the demand for Irish unity. Our job is to ensure that the political institutions on this island deliver for all of the people and our responsibility is to build the Sinn Féin party.

Part of our work has to be to persuade unionists of the desirability of a shared, united Ireland. That does not mean that the unionist political class have a veto over the future. It does means that we, as genuine democrats and republicans, recognise the validity and wisdom of Tone’s great call for the unity of Catholic, Protestant and Dissenter and that we are committed to bringing this about.

So, let me thank all of our activists who are engaging in this crucially important work. In this city at this time there is more work being done by republicans, across the sectarian divisions, in working class unionist neighbourhoods, than at any time since James Connolly lived on the Falls Road.

Of course Sinn Féin also has a job of work to deliver for the republican citizens of Belfast especially those who are disadvantaged in any way. We do this on the basis of objective need - we work for all citizens - in the knowledge that such work is part of the endless responsibility to build and use our political strength to tackle inequality and injustice.

At this point let me say a few short words about so called republican dissidents. I uphold the right of everyone to dissent from Sinn Féin’s point of view. But no one is entitled to hijack our proud republican history and our republican future and abuse it for narrow selfish interests or self gain.

Sinn Féin, standing firmly on a republican platform, sets ourselves firmly against those elements who do this. Let me also pay homage to our patriot dead, not just the men and women who fell in 1916, but to every generation of heroes and heroines and particularly those of our own time. We are extremely proud of the volunteer soldiers of the Irish Republican Army and the activists of Sinn Fein and all others who gave their lives for Irish freedom. We are indebted to their families.

Our resolve is to finish the work that they began and Sinn Féin is about uniting the greatest number of people in active support of this aim. There is a part for all citizens in this great endeavour and I take this opportunity at this sacred place to appeal to everyone to join with us in this necessary work.

The dire economic situation is the number one issue for many people today. Predictions of half a million citizens on the dole by Christmas give some sense of the difficulties facing working people across this island.

I note assertions by DUP ministers after the layoffs at Bombardier, FG Wilson and Visteon that there is little that a devolved administration can do in the face of a global crisis. I disagree. We can always do more. We can be imaginative and innovative. And if we have not enough powers, as the DUP appears to suggest, then it makes economic sense as well as political sense, that we should take whatever powers we need to do the job we are elected to do.

Sinn Féin is working to build an economy which serves the needs of Irish society and not the other way around. While working to improve the quality of life in the here and now, we see a united Irish economy as the best option.

But Sinn Féin is not just about a change of flags. There is little difference between the social and economic policies of Fianna Fáil and Fine Gael. Both pay lip service to republican principles and to the Proclamation. Both govern in the interests of elites and against the interests of citizens

1916 saw the coming together of nationalists, republicans, language activists, Trade Unionists and the women’s movement in the cause of Irish Unity. So, in this 100th anniversary of the formation of the Irish Transport and General Workers Union we send greetings to the labour movement. We recall proudly how Jim Larkin campaigned in this city and how he lit a fire that blazed in 1913 particularly in the Great Lock-Out.

So Sinn Féin Féin is ready to join with other political parties, trade unions, community and voluntary organisations to forge a new political alliance for change in Ireland. Such an alternative would seek to combine economic success with social responsibility. It would foster prosperity and equality.

We are also very mindful that there is a significant element within the Southern political establishment and the SDLP whose inclination is to view the Good Friday Agreement and the institutions which have arisen from it as a final political destination.

On this issue we are with Charles Stewart Parnell when he asserted, ‘No man has the right to say to his country; thus far shalt thou go and no further.’ Republicans must ensure that the Irish Government does not renege on its obligations to the political institutions and all-Ireland integration.

We are the only party contesting all the Irish constituencies in the European elections in June. There will also be local government polls in the 26 counties.

These are important elections and it is important that all of us work together once again to maximise the Sinn Féin vote. That means republican Belfast recording the very highest possible vote for our candidate Bairbre de Brún.

So my friends, there is plenty of work for every one of us. Play your part.

40 years ago the Orange state thought it could crush us. It failed. Today, on this Easter Sunday we stand proudly at the gravesides of our fallen comrades unbroken and unbowed and ready to persecute the next phase of our struggle.

The spirit of 1916 is needed at this time. We leave here today confident in the reality that that spirit is alive and well in Republican Belfast and throughout republican Ireland. There is work to be done. Let us go from here and do that work. 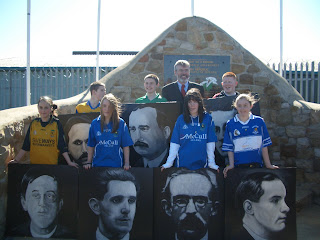 Gerry you wrote:
"I will make this available to anyone here who is interested."
I am certainly interested, thank you.
On another note, Sinn Fein was well represented in Toronto this week.
Tom Hartley gave a great and well received speech in Toronto.
Alex Maskey did too at the Easter commemoration in Brampton.

Always great to have them over here to bring news.encouragment, and to help keep us active.

Kate in Canada ...heading to Belfast

We have many differences, but our core values of peace and self determination are shared.

I appreciate you speak for the proud Republican community, but stating your desire to honour the dead of the IRA whilst wishing to unite Ireland with the support of the protestant and unionist community seems a difficult circle to square. Do you not recognise that stating your regret for the deaths caused by the IRA and sympathy for the hundreds of innocents murdered by them would go some way to generating unanimous sympathy with your modern position?

Kate said, "I am certainly interested, thank you," and that goes for me, too, Gerry.

Gerry, very glad you are home, safe & sound. I would be interested in receiving the report. Here is a question: Because the economy has taken a down turn, do you think the people can still move forward in a positive way? A very simplistic question, yes, I can only hope that the optimism for a united Ireland is not overshadowed, nor overtaken by the the challenges that will be faced in the light of the economic troubles.
I applaud the goals that Sinn Fein is pursuing for the good of all to improve the quality of life; and hope this will guide people not to forget and remain positve.
On a side note: there is a support page for you on Facebook, if it is not you, it would be good to clarify this.