No to Israeli annexation 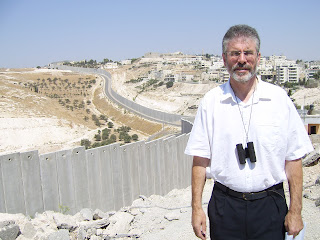 The Monstrous Separation Wall that stretches for hundreds of kilometres across stolen Palestinian land, cutting Palestinians off from their farms and water sources

Five times in recent years I have visited Palestine and Israel. I have spoken to leaders and to citizens and human rights advocates on both sides. I have been in Gaza City and the West Bank. I have been in the refugee camps. I have walked along the monstrous separation wall which cuts Palestinian families off from their land and created the biggest ghettoes in the world. All of this is in breach of international law. It is illegal. 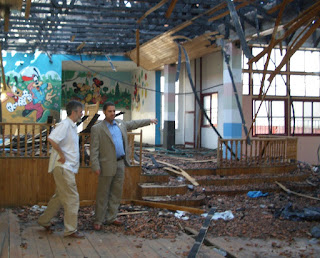 Hospital bombed by Israel in Gaza

The plan by Israeli Prime Minister Benjamin Netanyahu to begin annexing up to 30% of the West Bank beginning next week is also illegal. But the Irish Government refuses to challenge this criminal act in any meaningful way.

The Government, and in particular the civil servants who worked on this initiative, are to be commended for winning a seat on the UN Security Council.

Of course, there are many people, including this writer, who are openly sceptical and critical at the lack of reform of the United Nations, and in particular the ability of any of the so-called ‘big five’ - the USA, China, Britain, France and Russia - to veto a resolution going to the Security Council. However, Simon Coveney – if he remains Minister for Foreign Affairs in any FG/FF/GP government – described the extent of his ambition for the Security Council as akin to being a “pebble in the shoe” of the large states.

At a time when Covid-19 is a major pandemic with unparalleled economic consequences for the world; when human rights abuses and the rights of citizens enshrined in UN charters are everywhere under attack; when the numbers of migrants and refugees across the world is spiralling out of all control; and when a US President is attacking the funding for the World Health Organisation and for UNWRA - the UN agency that looks after Palestinian refugees – we need the independent members of the UN Security Council and the Irish government which will now sit there, to be more than a ‘pebble’ in a shoe.

But, lest we forget, this is the same Minister for Foreign Affairs who ensured that the Occupied Territories Bill – which seeks to prevent the Irish state from trading in “the import and sales of goods, services and natural resources originating in illegal settlements in occupied territories” - from being referenced in the putative Programme for Government 2020 agreed between the leaders of Fine Gael, Fianna Fáil and the Greens.

Israel isn’t even mentioned in the Bill. It is aimed at all states with illegal settlements and is about preventing them from profiting from their occupation through trade. Including Israel of course.  But Simon said no. Micheál Martin and Eamonn Ryan agreed.

Minister Coveney and his two putative coalition partners in government are prepared to ignore international law and allow Israeli goods and services originating in the occupied territories to be traded in the 26 counties.

In these circumstances what hope is there that an Irish Government of this kind, will vigorously oppose inside and outside of the Security Council the plan by Israeli Prime Minister Benjamin Netanyahu to annex up to 30% of the West Bank?

Annexation of occupied territory is prohibited under international law since 1945. Emerging out of a world war whose roots where in part to be found in the annexation of land at the end of the First World War and then in the 1930s by the Nazis, the founders of the United Nations had the foresight to outlaw annexation because it inevitably leads to conflict, discrimination and human rights abuses. The UN has on many occasions since the 1967 six day war, which saw Israel occupy the West Bank, Golan Heights and Gaza, affirmed the principle of the “inadmissibility of the acquisition of territory” by force.

Regrettably, the refusal by this and previous Irish governments to oppose the illegal actions of Israel and of its occupation forces, has encouraged and emboldened Netanyahu to believe that now is the time to annex substantial parts of the West Bank. Last April Netanyahu said that he intended annexing Jewish settlements and outposts in the West Bank. These settlements, which are illegal under international law, number over 240 and house almost three quarters of a million Israeli settlers. On the occasions I have visited the region I have seen for myself the extent to which these settlements steal Palestinian land and water rights and mineral resources and are strategically used to separate and control the Palestinian population of the West Bank. As part of this process Palestinians have been killed, their homes demolished, olive groves uprooted and farms destroyed.

Last September the Israeli Prime Minister – encouraged by the support of US President Trump - said that he also planned to annex the Jordan Valley. This makes up almost 30% of the West Bank. Palestinian families living in the Jordan Valley will find it increasingly difficult to stay there. Much of the Valley is already under the control of Israel which bars Palestinians from digging wells or building home extensions, including tents, or irrigation works. From 2009 to 2016 ninety eight per cent of almost three and a half thousand applications for permits for new infrastructure were rejected by the Israeli authorities.

Nor will Palestinians living in the annexed territories be allowed to hold Israeli citizenship. They will be barred from having any say in the state in which they are being forced to live.

The United Nations, the EU and individual states including the  Irish state, have failed to defend international law. This failure and Israeli expansionism will usher in an Israeli apartheid state similar in design and intent to the Bantustan scheme created by the White apartheid government in South Africa. Bantu territories were pieces of land – essentially ethnic ghettoes - into which black South Africans were pushed. It was the apartheid regime’s means of control and exploitation in which poverty was widespread and human rights abuses a constant reality.

To its shame the international community has turned a blind eye to Israeli aggression against the Palestinian people. The separation wall, the theft of land and water, the murder of civilians, the use of torture, the victimisation of children, the illegal blockade of the Gaza Strip, the denial of human rights are all products of this. Israel’s strategy and Netanyahu’s plans for annexation have grievously undermined the little remaining hope in the peace process, which for decades now has staggered from crisis to crisis.

But it’s not too late to stop the slide into even greater chaos and conflict. The international community can still make a difference. The Irish government can give a lead. If Minister Coveney wants the Irish government’s two year term on the Security Council to be more meaningful than simply keep a seat warm, and to be more than an occasional irritant to the big states, then he has to stop making excuses for doing nothing. Firstly, the Irish government should commit to passing the Occupied Territories Bill. Secondly, it should officially recognise the Palestinian state as the Oireachtas agreed in December 2014 thereby providing some measure of solidarity and legal protection to the Palestinian people at this dangerous time. And thirdly, the government should introduce a motion to the Security Council rejecting Netanyahu’s annexation plans.