BREAKING THEIR OWN LAWS. 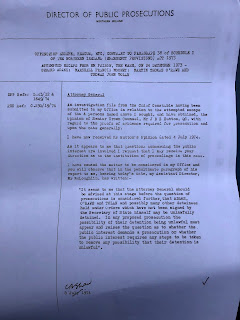 The British named it Operation Demetrius. For those of us who lived through the 9 August 1971 it was internment day. Like many others I was awakened early that morning by the sound of binlids rattling their alarm across the streets of Ballymurphy and Springhill. 342 men and boys from nationalist homes across the North were dragged from their beds in the early hours of the morning by thousands of British soldiers and RUC Many were beaten and 14 – the Hooded Men - were subjected to days of sustained torture.

Thousands fled their homes. 25 people were killed in the following four days. In my home area 11 local citizens, including a priest and mother of eight, were killed by the Paras in the Ballymurphy Massacre.  Five months later the Paras attacked an anti-internment march in Derry and killed 14 people. Bloody Sunday was another of many dark days in the conflict. In July 1972 another five citizens, this time in Springhill, were killed by the British Army. They included another priest and a thirteen year old girl.

The Ulster Unionist Party, which for 50 years had ruled at Stormont, had  demanded that the British bring in internment.  It had been used in every decade since partition, including for a brief time in 1969. It was part of a repressive arsenal, including the Special Powers Act and institutionalised structured political and religious discrimination, which had sustained unionist domination in the North for 50 years. Internment of men and women was without charge or trail and for an indefinite undeclared period. Some of the older men had been interned many times. Liam Mulholland was first imprisoned in the 1920s and in every decade since including the 1970s. Throughout that time British governments supported the existence of this squalid little apartheid police  state.

Of course, Unionism wasn’t alone in employing internment. It was used by the British after the 1916 Rising and again during the Tan War. The Free State government used it in the 1920s and Fianna Fáil brought it in between 1939 and 1946. Fianna Fáil used it again during the 1950s and in December 1970 the then Fianna Fáil Taoiseach Jack Lynch announced the introduction of internment but political and public outrage forced him to backtrack.

Whenever the British government went for the military option it brought with it the techniques of counter-insurgency that it had employed in dozens of colonial conflicts in Africa, Europe, the Middle East and Asia in the decades after the Second World War. These included the use of internment, the torture of detainees, shoot-to-kill tactics, curfew, riot control tactics, the use of state collusion and counter-gangs, and much more. Instead of asserting the primacy of politics the Conservative government of Prime Minister Ted Heath handed power over to the generals. The tactics and strategies that resulted from this failed to contain the conflict but instead led quickly to even greater resistance.

I was first arrested and interned in March 1972. After several days in Holywood Barracks where I was badly beaten I was taken to the Maidstone prison ship in Belfast Lough. The conditions for the 150 internees on the boat were appalling. We were held below deck. The fold-up bunks were in tiers of three. Light struggled in through small port-holes. The food was awful and the boat sat in its own sewage. The toilets were constantly flooded. Following   protests by us the Maidstone was closed down by the British  after Stormont was prorogued. We were all taken to Long Kesh by helicopter.
In June 1972 I was released to take part in talks with the British government and then as part of a republican delegation to London. The truce that followed was short-lived.
Just over a year later I was arrested again in July 1973. I was beaten unconscious by British soldiers and interned again in Long Kesh, initially under an Interim Custody Order.  There are lots of photos of the Cages of Long Kesh available online if you want a sense of what it looked like. The camp was built on a former British RAF base. Every Cage was surrounded by a high wire fence topped with barbed wire. Each Cage had four Nissan huts made of two skins of corrugated tin. Cages held around 100 men and in the autumn and winter they were freezing cold, damp, and poorly lit. In the summer they could be stifling. Toilet and shower facilities were primitive. The food was normally cold and of a poor standard. Most internees relied on food parcels sent in by our families.

The British Army carried out periodic raids on the internee Cages. Scores of soldiers with batons and shields would smash their way into the huts during the night, drag men outside and force us to spread-eagle against the wire for hours. Many were beaten. Personal belongings were ripped apart, beds urinated on, and handicrafts – which some internees did to pass the time – were destroyed. Hugh Coney was shot dead in 1974.

Like prisoner-of-war camps throughout history there were also escapes – some successful – some less so. On Christmas Eve 1973 four of us in Cage 6 – Marshall Mooney, Tommy Toland, Marty O’Rawe and myself, all from Ballymurphy – tried to escape. We were caught.

Seven months later in July 1974 I was caught again. This time I managed to get a wee bit further. In March 1975 I was convicted on the first attempt and sentenced to 18 months imprisonment. I was subsequently convicted in April 1975 of the second attempt and was given a three year sentence to run consecutively.

Now that the British Supreme Court has ruled that my imprisonment was unlawful I would like to plead guilty to numerous other escape bids including some very scary claustrophobic efforts to dig tunnels.  I was eventually released in 1977.

Fast forward 32 years and a researcher working for the Pat Finucane Centre in October 2009 was going through documents released by the British government under the 30 years rule. The researcher found a memorandum, dated 8 July 1974, from the Director of Public Prosecutions to the British Attorney General.

The key paragraph says: “It seems to me that the Attorney General should be advised at this stage before the question of prosecutions is considered further that Adams, O’Rawe and Tolan and possibility many other detainees held under the Orders which have not been signed by the Secretary of State himself may be unlawfully detained.”

In the course of the ten years that it took from the researcher first uncovered this document to the British Supreme Court decision last week a further ‘Secret’ document was uncovered that revealed that the Labour Prime Minister Harold Wilson and his Secretary of State for the North Merlyn Rees held a meeting on the 17 July 1974 to discuss “an urgent problem” which the Attorney General had raised with him. The AG Samuel Silkin told Wilson and Rees that an examination of the papers concerning our attempted escape had revealed that the Interim Custody Orders of three of us had not been “examined personally by the Secretary of State during the Conservative administration”.

Silkin told the meeting that there “might be as many as 200 persons unlawfully detained” in the North. This “could only be put right by retrospective legislation in Parliament.”

So, the British government knew, before it chose to put me on trial, that I was unlawfully detained. It also knew that up to 200 other people might also be unlawfully interned. It did nothing. The onus is now on the British government to identify and inform other internees whose Internment may also have been unlawful. That’s unlikely so if you were arrested and interned between 7 November 1972 and early 1974 and you think that your internment order was unlawful don’t wait - contact your solicitor.
Posted by Gerry Adams at 5:00 PM