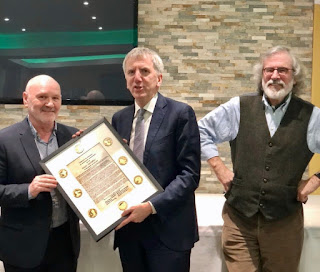 Recently, after almost three decades as an elected representative - first as a Councillor on Belfast City Council and then in the Assembly – Máirtín Ó Muilleoir announced his decision to step back from the Assembly and from electoral politics. Last Friday night Shinners and friends in south Belfast got together to thank Máirtín for his years of activism and I was pleased to join them.

As our first Councillor into Belfast City Council Alex Maskey told how he first met Máirtín when he was an activist during the hunger strike campaign in 1981. He also recounted several very funny stories of Máirtín’s early experience with unionist Councillors who were determined not to treat Sinn Féin Councillors with respect.  When it came my turn I acknowledged Helen, who provided much need support to Máirtín during all of the difficult days.
Máirtín is now joining an illustrious band of former Sinn Féin elected representatives including Martin Ferris, Caoimhghín Ó Caoláin, Danny Morrison, Bairbre de Brún, myself and others who have stepped to one side to allow others to come forward.
Máirtín first stood as a Council candidate in 1985. On that occasion he was unsuccessful but two years later he won a by-election and joined the growing team of Shinners in the City Hall.
Máirtín recounted his experiences in the City Hall in his book “The Dome of Delight”. The Council then was a very different place. In the years following the election of Alex in 1983 and Sean McKnight in 1984 the unionist parties sought to bully and intimidate republican Councillors.
Sammy Wilson described the Sinn Féin Councillors as "evil gunmen (he refused to recognise mna na héireann) who had crawled out of west Belfast" and he vowed to ostracise them. Unionists refused to talk to them, except to call them names. They refused to allow them to speak in the Council or to raise constituency issues. They tried to shout Sinn Féin Councillors down; deny them speaking rights; blew rape whistles and blew horns and sprayed deodorant on to them. They also refused to invite Sinn Fein Councillors to Civic events. That led to alternative people’s openings of civic buildings, like the Whiterock Leisure Centre. 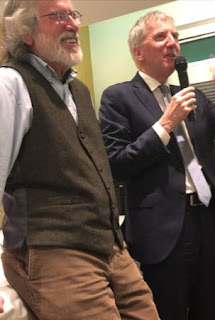 The unionist parties went so far as to establish illegal sub-committees to carry out the work of the Council which excluded Sinn Fein members from the decision making process. They refused to allow them to sit at the table where committee members sat to carry out their business. They tried to insist that Sinn Féin Councillors sit at the back of the room when some of these committees were meeting. Fra McCann put a stop to that. No sitting at the back of the room for him. He sat at the table and no one could shift him.
Sinn Féin Councillors were regular targets for unionist paramilitaries. Alex was shot. His friend Alan Lundy was shot dead in Alex’s home. Bobby Lavery’s home was attacked and his son Sean killed. The home of Jim Clinton who had been a Council candidate for Sinn Fein was attacked and his wife Theresa was killed. And there were others across the North and Eddie Fullerton in Donegal who were killed and wounded. Sheena Campbell was murdered not far from where we meet this evening.

Our offices, including the office in the City Hall, were bombed. Many Sinn Fein Councillors wore flax jackets going into and out of the one entrance into the City Hall. They varied their routes and were always mindful of the dangers they faced.

This was political environment when Máirtín and Fra were elected in November 1987 to the Council. Like the northern state that was founded in 1920 Belfast City Council was a place apart – an apartheid Council – representing an apartheid city separated into ghettoes in which nationalists and republicans were expected to meekly accept the crumbs from the table and keep quiet.

When Máirtín rose to make his first speech he opened with “Ba mhaith liom buíochas a thabhairt do na daoine a thug vote ...” That was as far as he got before Sammy Wilson jumped to his feet and demanded he be stopped. Unionists immediately raised their hands in support of a motion that he should not be heard. That’s when Máirtín began his second sentence.

There was that much noise from the unionist benches that no one could hear what he was saying but they knew it was in Irish. Sammy Wilson was apoplectic. He shouted that Irish was a ‘leprechaun language’. He called on the unionist Lord Mayor, Dixie Gilmore, to discipline Máirtín who the unionists tried to ridicule because he refused to use the English version of his name. The RUC were called. Máirtín was evicted from the chamber for what was described as disruptive behaviour.

It took years and a whole series of legal actions and injunctions in the courts but gradually undermined the unionist efforts to marginalise the Sinn Féin Councillors.
Máirtín and Alex and the other Sinn Féiners stood their ground; defending republican politics and standing up for our constituents and their rights.
We were determined that Belfast should be “Our City Also” and through the leadership of Alex and Sean McKnight and Lilly Fitzsimons and Tish Holland and Máirtín and many others they gradually broke down the  barriers to equal representation in the Council.
We also broke the ban on nationalist marches taking place into the city centre.
Máirtín was a Councillor until 1997 and then took up full time work managing the Belfast Media Group and is the publisher of the Irish Echo in New York. He came back onto the Council in 2011 and in 2013 he followed in the footsteps of Alex and Niall when he became the City’s First Citizen. He was attacked by thugs in Woodvale Park while performing his duty as Ard Mheara but undeterred he was back out in the neighbourhoods almost immediately afterward.
As a business person Máirtín brought a very acute sense of the needs of business in Belfast to the Office of First Citizen and he championed equality, especially for Irish language speakers. He also actively promoted the Arts. In 2014 Máirtín was co-opted onto the Assembly and two years later he was appointed Minister for Finance. 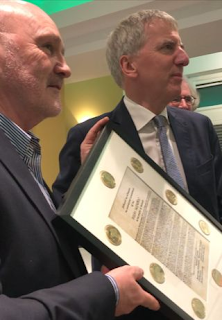 Máirtín has boundless energy – he never stops – literally. He is a human Duracell bunny – a Billy whiz. He is forever running marathons or galloping along the Lagan tow path or some other place.
He has been a tireless advocate for Belfast; for the North and for Irish Unity. He has developed and strengthened links with our diaspora, especially in north America.
He has been involved in countless initiatives to promote Belfast; education; the Irish language and culture and business. The Aisling Bursaries awards is just one example of this.
Máirtín has been a formidable elected representative. He stands against bigotry and sectarianism and is determined to make Belfast a better place for all its citizens. I want to commend him for his leadership and his contribution to creating a new Belfast. Many thanks to Helen and Máirtín’s family for all that they have done and best wishes for all that they do in the future.