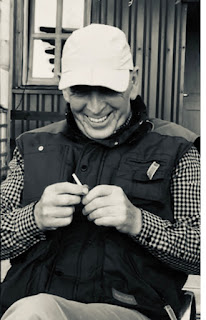 Floorboards was my friend. Sorry.  Floorboards is my friend. As regular readers will know this column doesn’t believe that your friends cease to be your friends just because they die. No, they are still your friends. If a friend goes off to the USA or somewhere else that doesn’t mean they stop being a friend. No. You may not see them again but the friendship doesn’t cease. So with Floorboards. He died last month. All of a sudden. But he is still my friend.
So my solidarity and condolences to Frances and their daughters Joanne and Sarah and their spouses and children, and Joe’s surviving siblings. Frances is a great woman. Joe’s one and only love. Quiet. Warm. Calm. The centre of gravity in Floorboard’s life and the epicentre of the life of their family.
I first met Floorboards in Long Kesh. His proper name is Joe Rafter. He is seven or eight years older than me. We invited him into Cage Eleven. He was in solitary in the Punishment Cells. Apparently following a disagreement with the republican regime he left the cages. But understandably he refused to relinquish his political status. So he was on protest in the Punishment Cells. Gaol is like that. So I asked if we could take him in. We could I was advised. So we did. 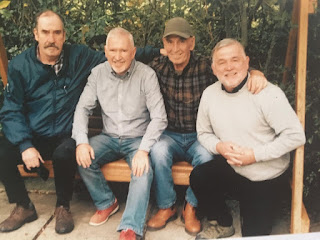 Jim McCann, PaddyA, Floorboards and Liam Stone
Unlike a lot of the other cages, Cage Eleven was a more relaxed, less militarised regime. That suited Joe. He was a free spirit. Prepared, at a stretch, to tolerate the penal regime but not really capable of letting tedious prisoner made rules govern every element of his life and every minute of his time. Joe got bored easily. He needed to be doing things. He had great energy. He had great hands for making handicrafts. He enjoyed storytelling, craic.  Cleaky and he were great buddies.
They were both from North Belfast though Joe was always more of a country man than the urban centric Cleaky. That’s probably the Ligoniel and Silverstream in him. That’s where the Rafter family moved to from Ardilea Street in the Bone and where Joe spent his formative years. He had great yarns of wild times with friends from the Traveller community. Tales of dogs and donkies. Of painting barns and taramacing drive ways and laneways. Of scrapes and escapes. Of working moves. Of nature and the outdoors. Little wonder prison life didn’t suit him.
He used to make very fine covered wagons as ornaments in tribute to the travellers he worked with back in the day.  That’s how he survived Long Kesh. By futtering at this and that, like most of us. And he did his time and went back to Frances and painting barns to support his clánn. As strong as an ox, he took any work he could get as long as it was outside. He remained loyal to the republican cause through all the twists and turns of recent times. He didn’t have much time for bar room revolutionaries or splitters. Joe’s politics were solid. He drove as far as Cork to erect posters in recent elections and he was there at the convention in which selected Declan Kearney as the local Sinn Féin candidate.
Joe didn’t have much time for the organised religions but his core values were about decency, compassion and fairness. He didn’t have a sectarian bone in his body and he retained his relationships with people from the Protestant tradition particularly with cronies he had from before the conflict. He had a great affection for the United Irish Society.  For Tone and Jemmy Hope. He loved to recite ‘The Man from God Knows Where’. 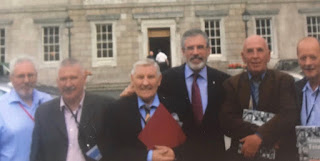 RG, PaddyA, Wee Harry, mise, Floorboards agus Tangus
Recitations or ‘rec-imitations’ were Joe’s thing. ‘I’m livin’ in Drumlister’ was one of his party pieces. That and jiving. He also wrote his own verses. Some are very funny. Others are very patriotic. He also loved folklore, country ways, old stories. Black thorn sticks. Dogs. He didn’t have much Irish. I can picture him contesting that with me. His eyes full of mischief and devilment. But, ‘Is Mise Raifteirí An File’ was one of his favourite Irish poems. And he loved the poetry of the Australian writer and poet Henry Lawson. Lawson was a Bush poet renowned for his tales of down and outs and ordinary folk in the style of Robert Service. And Floorboards.
Joe was a dapper dresser. Horseymen’s yellah boots. Chinos. A decent tweed cap or hat. A waist coat. He and I were to get together recently. We had talked on the phone to arrange it. I was really looking forward to a good evening’s soiree. A wee drink maybe? Lots of tall tales and good craic.  The first get together in a long time. But elections after elections, my work as a TD in Louth and other busyness, which keeps me out of Belfast most of the time, meant we put it off until after December 12 and the Westminster contest.
Then I got the word. Joe had died suddenly. And so I spent more time at his wake and getting there and back, than we probably would have got if we had met up. And I regret that. The only consolation was that I and lots of Joe’s comrades got to be with Frances when she needed us and we got to meet again with her enlarged family including their wonderful grandchildren.
Sarah summed up what they owed Joe and the men and women of his generation when she spoke movingly of her father, their grandfather. And Joanne recited Mo Chraoibhín Cno. Floorboards would have approved. He would also approve of Liam Stone’s words of farewell and the eloquent words of his grandson Niall and brother Terry, as well as his youngest granddaughter Jessica’s recital of ‘Is Mise Raifteirí An File’ and another of his Granddaughter’s, Edel who recited Joe’s own poem.   I will leave the last word with Floorboards himself. He would like that. Slán Joseph. See you along the road. 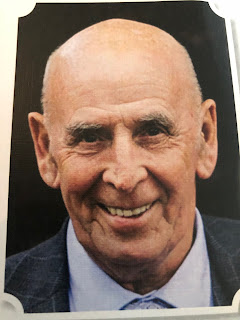 Passing Through
To friends I love and friends I knew,
I write these lines and think of you.
And of a time long years ago,
When in the bog, trees did not grow.
As we were passing through.

For absent friends in memory.
To our children leave a legacy,
In peace and love united be.
Free from the centre to the sea,
With life as long as Joshua tree,
When we have passed on through.