“I THOUGHT YOU WERE DEAD” 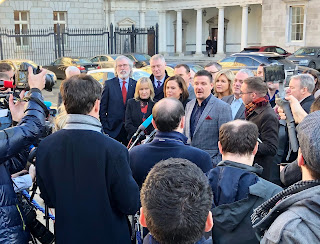 Dublin Mid West is a sprawling constituency with vast housing estates of working class communities cheek to jowl with more affluent neighbourhoods. On Friday afternoon I was there with Nikki, Christina and RG.  We were part of the Sinn Féin team campaigning for Councillor Mark Ward in one of the four Dáil by-elections. While much of the focus in the North is understandably on the Westminster general election, Sinn Féin, as the only real all-Ireland party, was also fighting these four by-elections. They were to fill Dáil seats left vacant when four TDs were elected to the European Parliament in May.


We all knew the Dublin Mid West contest was going to be a tough challenge. The seat had been held by Frances Fitzgerald, a former Fine Gael Minister for Justice and Tánaiste. It was the one seat of the four that Fine Gael was expecting to win but the local activists led by Eoin Ó Broin knew we were in with a chance.
Friday was polling day, and for it and the previous three days I had been in the constituency, alongside Mary Lou and other Sinn Féin leaders. You didn’t have to be there long to realise that Mark Ward is very well known and very popular. He’s one of those activists - a Councillor - who seem to know everyone by their first name and what their specific issues are. Mark has a genuinely compassionate and friendly manner when talking to people. This was evident every day on the all doors we knocked, the shops we visited and in the reception he received at a centre for people with addiction issues and in the local Community equestrian centre. It was also obvious that Eoin Ó Broin, the local Sinn Féin TD, is a very effective and popular public representative. 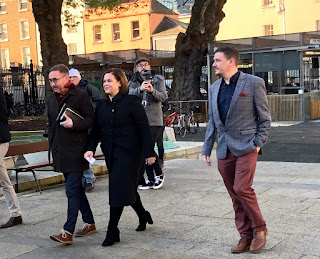 Mark arriving at Leinster House on his first day with Mary Lou and Eoin
I had requested loudhailers for our car for  election day.  So on the day I was put into a car with Mick Boyle a local activist, and given a microphone with a couple of loud speakers. My job was to travel slowly around the area reminding the voters that it was election day. It was their day, the peoples’ day when voters decide who would represent them.
I have always found mobile loud hailing a very effective way of getting the Sinn Féin vote out. After the weeks of canvassing it is the best way for encouraging the maximum amount of people to get out and vote. Of course it only works where you know your vote. In Dublin that’s most likely to be working class estates. Like the ones we were in Dublin Mid West in a very focussed way during this campaign.
It’s also good craic. Give me a microphone and a car and I will happily spend hours urging the voters to exercise their franchise. It’s funny watching how people respond to a disembodied  voice booming at them from they know what where.
“How y’doing missus? Lovely day isn’t it. Voted yet?”
When they realise it’s me it’s very entertaining.  Friday in Dublin Mid West was no different. Young people especially – once they realised where the voice was coming from - enjoyed the fun.
At one point we were stuck in another of the traffic jams that is a part of life in Clondalkin. A young lad on a bicycle came flying up the road.
“Tiocfaid ár lá” he shouted as he flew past punching the air with his fist. He then did a sharp wheelie and came speeding back again.
As he drew level I put the car window down to slagg him.
He got in first.
“Jeez, Gerry I thought you were dead!”
And off he flew with his front wheel rising to meet the sky.
My hair also got a lot of attention.

Or ‘I didn’t know Billy Connolly was a Shinner’

‘Gerry get your hair cut’!

‘Gerry your hair is lovely’.

Let me clarify this hair thing. I have a bet with Martin Ferris and Caoimhghín Ó Caoláin that we will let our hair grow until An Taoiseach calls a General Election. So far I am winning that bet. Talking of bets - a few days before polling day I asked RG to put 10 Euros on Mark Ward to top the poll.

Meantime back in the car with the trusty comrade Mr Boyle I continued to cajole  the punters. Another Mick, Mick O’Brien, and several others were canvassing houses in St. Ronans.

A wee elderly woman answered a knock from one of the team.
She was quite excited.
“I heard Martin McGuinness earlier. He was in the street.”
“No love, it wasn’t Martin”.
“It was Martin. I heard his voice. He was calling for people to come out and vote for Mark Ward”.
“No Missus, I’m sorry it wasn’t Martin ...”
“I’m telling you it was him. I’d know his voice anywhere.”
“It was Gerry Adams not Martin”.
“Oh” she said and paused. “You’re right. Poor Martin has passed. Tell Gerry I’ve already voted for Mark.”
And so it went on. With Martin on his side Mark was flying. A long day for all, but a rewarding one.
Counting in the by-elections took place on Saturday. When all the counting and recounting was over Mark Ward had topped the poll and won the seat. It was then RG told me he hadn’t placed the bet. We were back in Belfast by then. He told me by text. Typical. 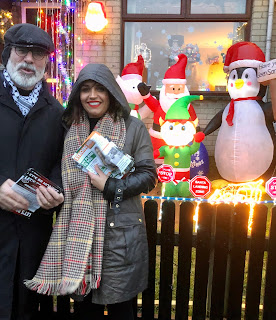 Mise agus Elisha taking a Christmas moment in Derry
Marks election was an amazing result but proof of what is possible when it is done right. It’s all about getting the basics right. Our other three candidates also performed very well with Tommy Gould coming a close second in Cork. Interestingly quite a lot if people I canvassed asked me about a United Ireland. As with our other candidates Mark Ward was very clear about his Irish Unity credentials.
Fine Gael failed to win any seats. Fianna Fáil picked up one and held on to one and the Greens got one. It was a bad day for the government and it makes their dependency on independents even more precarious. The fact is that without the confidence and supply arrangement with Fianna Fáil they could not survive.
The by-election results are evidence that the government in Dublin is out of touch with the needs and worries and hopes of people. It is a government which is failing citizens across every sector, but especially on issues like the environment, housing, homelessness, in rural Ireland and in health. Just this weekend nurses called for an investigation into the crisis in the emergency departments in the hospitals. With still a month to go until the end of the year already more people have had to wait on hospital trolleys than ever before – over one hundred thousand. Among them was a five year old child with a viral infection who was treated in a room used to store medical equipment. A ninety year old woman spent  two nights on a chair and a trolley in Limerick Hospital. 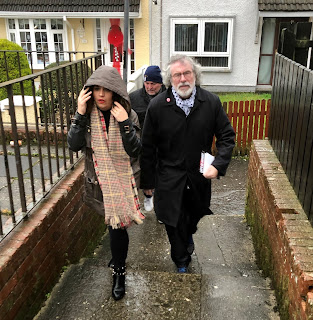 A wet canvas in Foyle
Early in the New Year An Taoiseach Leo Varadkar will call a general election. All of these issues, as well as the crucial matter of Irish Unity, will be on the agenda. I might even get a haircut.  The weekend by-election results are evidence that Sinn Féin is the real alternative to the conservative policies of Fine Gael and Fianna Fáil. In the meantime a word of thanks to our four candidates Mark Ward, Thomas Gould, Ann Graves and Johnny Mythen and to all of those who worked very hard to achieve a very successful outcome. Especially the Sinn Féin voters.
Now for the Westminster general election – see you on that campaign trail later this week. Watch out for our loudhailer car. And no I won’t be asking RG to go to the bookies for me. You can bet on that. 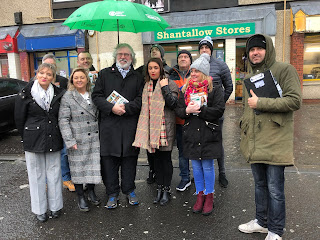 With the Shantallow team
Posted by Gerry Adams at 11:50 AM