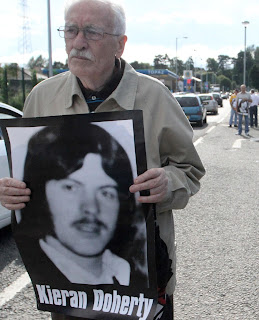 I met Dickie Glenholmes over fifty years ago. He has been in my life ever since. Sometimes we didn’t see each other for ages. Apart from anything else sometimes we would be in jail. Different jails. At the same time.  But we would keep in touch. We were also some times in the same jail. At the same time. For example in the half hut. Cage 6. Long Kesh.

He and I shared the same bunk bed for a while. Dickie was in the top bunk. Then when he was transferred to another cage I moved into Ted’s bottom bunk.  I always like the bottom bunk.

The half hut of Cage 6 was a bit mad. Or at least the comrades in it were a bit mad.  Dickie was about fifteen years older than the rest of us. Years later in another prison when I was about fifteen years older than most of my prison mates I realised what we younger inmates had put him through in Cage 6. Mad cap escapes. Eccentric resistance to British Army raids. Practical jokes. Nutty adventures. Endless playing of loud music. House trained seagulls.

Dickie brought all manner of good into my life. His friendship. The friendship of his wife Lily, positive and forever loyal. He also introduced me to Spaghetti Bolognese, and forever claimed that I asked for potatoes with it. One his most important introductions was to Kathleen Largey and her husband Eamonn. I knew them through their ballad singing with The Flying Column but Dickie brought me to their home in John Street when I was on the run. Kathleen invited Colette to stay there as well. We began a relationship which lasted beyond Kathleen and Eamonn’s deaths and which continues to this day through Áine and Máire and their children and their other sisters. 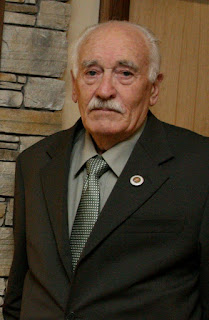 Dickie was central to all that. And now he too is dead. After a long illness. He was not getting better and he knew it.  Catholics pray for a happy death. Dickie was blessed with such a conclusion to his long life after being bed bound and in the care of his loving family. Jim Gibney celebrated Dickie’s life and the contribution of his family to our struggle at the graveside with thoughtful words of remembrance, humour and gratitude for a life well lived. 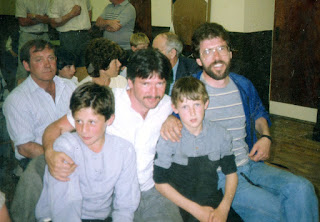 Gerry Begley brought me to my first games of hurling and football when I was five. He was twelve. That was in the 1950s. Gerry’s father was my Granny Adams’ brother. I lived with my Granny in Abercorn Street North. The Begley’s also lived in Abercorn Street North.  So Gerry took me up Leeson Street to St Finian’s School on the Falls Road when I started my education there. Gerry was a big boy. I was his wee cousin. He was probably dragooned into taking me everywhere from the Dunville Park to Colin Glen and Tornaroy. He was also a lovely hurler and a fine footballer.  A stalwart in Dwyer’s alongside Paddy Elliot. His sister Marie was a fiery Camóg. 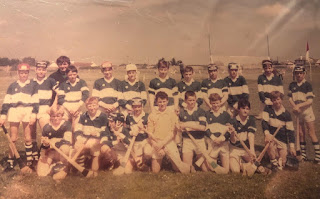 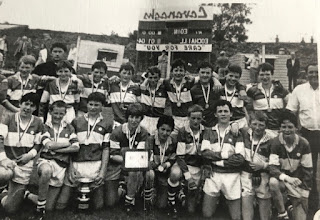 When Gerry married Mary they went eventually to Ballymurphy where he and John Grego mentored young athletes, including his sons and our Gearóid, in the art of Gaelic football and hurling. Gerry was a great Gael. I didn’t see him as often as I should have but my older brother Paddy used to have a wee drink with him now and then and they would discuss the twists and turns of Gaelic games at club, county and national level. As always with lapsed athletes the more they talked the better they became in their own recollections of games long passed, of victories well deserved and defeats unjustly foisted upon them by unfair or visually challenged referees. 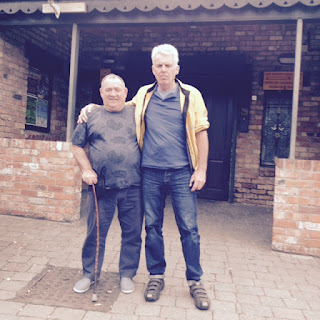 Gerry with his big cousin Frank from Canada

Gerry’s coffin was draped in the Antrim flag as we carried him on his last journey from the Murph, escorted by his fine family and generations of Gaelic athletes. His funeral was the day after Dickie’s.

The next day we buried Fr Des Wilson.  Ninety four years is a lot of years. Des was astonished that he lived so long. He remained intellectually and mentally vigorous to the end. And hopeful. Hope was in Des’s DNA. Not dreamydroo hope. No! Des’s hope was based on his belief in the strength and goodness and indomitable nature of human beings. Especially in times of adversity. He believed in Jesus. He believed in the Beatitudes. So it was that he left his comfortable position to live among the poor and oppressed. He took his stand with the rest of us and against the powerful including those in his own church. 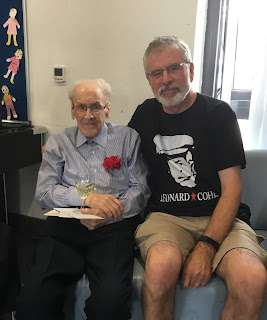 Father Joe McVeigh described all of this wonderfully in his homily at Des’s Requiem Mass in Corpus Christi. I took great comfort from his words. What goes around comes around. Des the educator, the activist, the priest. Des the feminist, the democrat, the philosopher. The prophet. Des the job maker. The writer. Des the dreamer. Des the doer. Des the gardener. 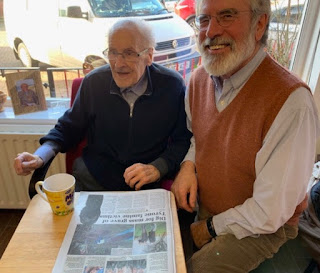 There were three bishops in attendance. Father Des – the mischief maker – would enjoy that. The mountains came to Mohammed.

Ar slí an fhirinne is how we describe in Irish what happens to a person when they die. They are on the way of truth. They know all the answers to all the mysteries of life. And death. The pity is nobody comes back to tell the rest of us what happens. So we can only live in the life we have and do the best we can to make it better for people not as lucky as us. That’s what our three friends did. They lived life as best they could. They did their best. And they left their world better than they found it. And for that I commend and I thank them. 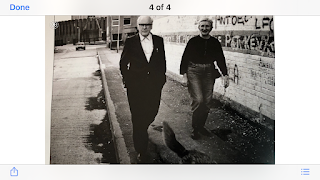