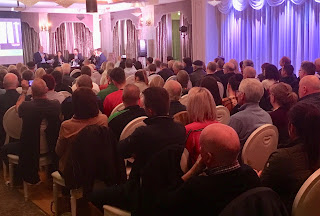 Last Thursday evening, in the midst of Storm Lorenzo, hundreds of citizens braved the weather and turned out to the Carrickdale Hotel on the border for a conference on Brexit. It was organised by Martina Anderson MEP and Mickey Brady MP. The conference room was packed to capacity. It was an informative conversation just days after the British Prime Minister Boris Johnson published his self-proclaimed ‘workable alternative’ proposals to the Backstop.

The Johnson proposals are dangerous and reckless. They will undermine the institutional and all-island structures, as well as the human rights principles, which are the strengths of the Good Friday Agreement.
Any proposal that will establish checks along the border is unacceptable. Any proposal that requires two borders on the island of Ireland is a fantasy. The alignment proposal would mean that significant elements of the all island economy would be outside the single market and customs union. It is woefully inadequate.
Moreover, Mr. Johnson plans to hand a veto to the DUP over all of this. A veto that can be exercised every four years. A veto, not only over the future of the economy in the North, but of the island of Ireland. This is a disgraceful and unacceptable proposal.
In short Johnson’s proposals are unworkable, impractical, and irresponsible. And no Irish government, and no Irish Taoiseach can sign up to these proposals or anything approximating to them.
As this column is published there are just three weeks left to Johnson’s ‘no is or buts’ deadline of October 31st. 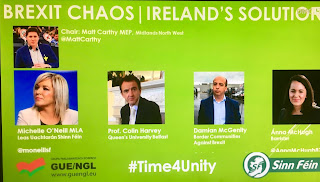 Brexit presents many challenges, but also opportunities. Principal among these must be achieving the objective of Irish unity and winning the referendum on unity which is the mechanism to secure this.
It is important for republicans to understand that we are in the national liberation stage of our struggle. As republicans and socialists we also understand that without national freedom and an end to British rule we cannot build the Ireland envisaged in the 1916 Proclamation and the Democratic Programme of the First Dáil.
A century ago James Connolly was right when he urged Labour to oppose partition. He recognised that partition would divide more than the land of Ireland. It would also divide the working class and worker from worker. This is not just some old adage or slogan that can be trotted out when we want to remember Connolly. His analysis in 1914 that working class unity is only possible in the absence of partition is just as valid today as it was then.
Connolly wrote: ‘Such a scheme (partition) as that agreed to by Redmond and Devlin, the betrayal; of the national democracy of industrial Ulster would mean a carnival of reaction both North and South, would set back the wheels of progress, would destroy the oncoming unity of the Irish labour movement and paralyse all advanced movements whilst it endured’.
Connolly was also right when he identified the national and social as opposite sides of the one coin. Complementary not contradictory. That’s what marked him out from other progressives. That’s what should mark republicans out today.
Sinn Féin is the uniting Ireland party. It is this which distinguishes us out from all of the other parties. Some who espouse socialism and left politics fail to comprehend the connection between Irish Unity and the implementation of socialist policies by a government. This is a serious flaw. Sinn Fein activists must work hard to educate ourselves and others, to inform and to be active on Irish Unity and ending the union as a worthy objective in its own right as well as a necessary prelude to a real republic.
We are back to Tone and the need to unite Catholic, Protestants and Dissenters as the means of breaking the connection with Britain and we are back to Connolly’s reconquest of Ireland by the people of Ireland. Bobby Sands understood this. He wrote: ‘The day will dawn when all the people of Ireland will have the desire for freedom to show. It’s is then we will see the rising of the moon”.
The fact is there is going to be a referendum on unity. This – and the ending of the Government of Ireland Act - was one of Sinn Féin’s main achievements in the Good Friday Agreement negotiations in 1998. Since then, and understandably, the party has been consumed by efforts to nurture the peace and political process and the many challenges this has thrown up. This has involved our work in representative forums; Stormont, Leinster House, the  European Parliament, Westminster, local Councils, as well as efforts to grow the party and make it fit for purpose. 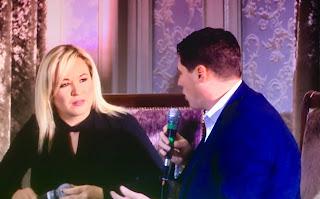 The issue of a referendum on unity is now centre stage. No other generation of Irish republicans has had this opportunity to end the union and partition. The men and women of 1916 had no such mechanism. Neither did Bobby Sands or Mairead Farrell and their contemporaries.
Despite resistance from both governments and the main unionist parties a referendum WILL be held in the next few years. The drivers for this are the demographic changes in the north, the politicisation of sections of the community there, the focus on rights which are being denied by a DUP led minority and Brexit. Brexit is also the accelerant.
Demographic trends suggest a nationalist voting majority in the north is close. Political unionism has lost its electoral majority in four consecutive elections and the exit poll conducted across the 26 counties in the wake of the Local Government and European elections show a huge majority in support of Irish unity.
Brexit has forced many to consider their constitutional future. We are seeing increasing contributions to the unity debate from a wide variety of people, with many citing Brexit as a catalyst for their considerations. Our responsibility as republicans and democrats is to grasp this opportunity. 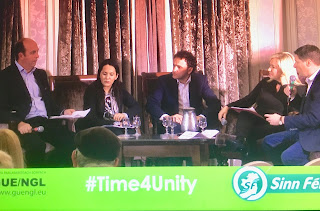