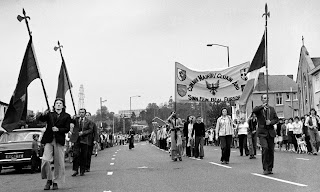 This photo by French photographer Gérard Harlay was taken on 8 August 1976. It shows Bobby Sands on the left carrying the Harp flag and Máire Drumm to the right leading the march. The late Marie Moore is behind Máire carrying a loud hailer.

Tuesday, October 22nd was the centenary of the birth of Máire Drumm. Many readers will know of her. Máire was one of the most courageous and visionary leaders Irish Republicanism has ever had.

This week I published a book on Máire. It is the latest of a little series of books in the Leargas series which so far has included folklorist Michael J Murphy, Republican leader John Joe McGirl and human rights lawyer Pat Finucane. I intend to republish a book on Sheena Campbell by Ella O’Dwyer and others in the next short while. 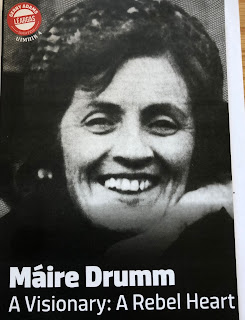 Maire was born Máire McAteer on Kelly’s Road, Killean, in south Armagh on October 22nd 1919. She was the eldest of four children – Christina (Teenie), Tommy and Seán. Máire attended Killean Primary School and later Our Lady’s Grammar School in Newry. When partition was imposed the McAteer family, like many others, found themselves trapped on the northern side of a border they did not want and in a state which did not want them. 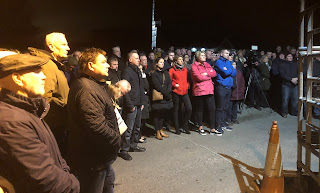 Commemoration on Tuesday night at Kelly's Road
The ditch at the end of the field at the back of her home was the border. For Máire it was an injustice she opposed all of her life. As a teenager Máire enjoyed Camogie and Irish dancing. After leaving school she worked for a time in John Quinn’s shop– The Milestone, which is reputed to have been the first supermarket in Newry. She left for Liverpool when she was 16 in search of work with her sister Teenie. There she joined the Gaelic League. She then moved to Dublin where she lived in Baggot Street. Máire joined Sinn Féin. In 1939 she moved to Belfast where she found work in a grocery shop in the Falls area of West Belfast. Over the next three decades she worked in a series of shops and supermarkets, including as deputy Manager. Máire worked in Quinn’s in Ardoyne, and for Stewarts Cash Stores.
Máire was very active as a camog in her local club Gael Uladh. She went on to become the Antrim Secretary and later the chairperson of the Ulster Council of the Camogie Association and All-Ireland Vice Chairperson. Máire was also involved in the McAleer School of Irish Dancing. Later she was prominently involved in planning and raising money for the opening of Casement Park in 1953. 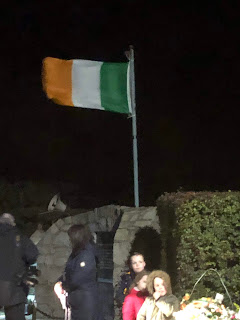 Máire was always very supportive of the republican political prisoners. She was a member of the Green Cross raising money for prisoners and their families. It was common practice then for republicans in Belfast to visit Republican prisoners from outside Belfast, in Crumlin Road prison. It was there that she met Jimmy Drumm. They were engaged before Jimmy was released.
Máire and Jimmy were married in St. Paul’s Church on the Falls Road on 16 July 1946. In 1956 Máire and Jimmy got a house in Glassmullan Gardens, in Andersonstown. There they raised their five children – Seamus, Margaret, Seán, Catherine and Máire Óg.
December 1956 saw the commencement of Operation Harvest – the IRA Border Campaign. Jimmy Drumm was arrested and held for four years until his release in 1956.
In the 1960s a focus on the denial of civil rights saw the establishment of the Civil Rights Association. When the unionist state responded violently in the pogroms of 1969 both Máire and Jimmy were centrally involved in helping the thousands who were forced to flee when their homes were destroyed by marauding gangs of RUC and loyalists.
Like many other homes, the Drumm home became a sanctuary for refugees. Máire was instrumental in having La Salle secondary school opened to the refugees. And while Máire was busy helping deeply traumatised families Jimmy was trying with others to secure the weapons needed to defend Catholic areas. The subsequent split within Republicanism in 1969 and 1970 saw Máire and Jimmy support what, for a time, was called the Provisionals.
The years that followed were busy ones for Máire and Jimmy. It was a time for courage and leadership and both stepped forward.Despite harassment, death threats, imprisonment and a vicious and scurrilous campaign of hate by the British media Máire refused to be browbeaten or bullied. She led from the front. Sinn Féin was still a banned organisation but Máire simply saw that as a challenge to be overcome.
An example of her leadership and courage occurred in July 1970 when the British Army placed the Falls community under military curfew. The streets of small terraced houses off the Falls Road were smothered in clouds of CS gas. Families were trapped in their homes choking from the gas. Three thousand soldiers and armoured vehicles surrounded them. The British soldiers smashed down front doors and wrecked homes, assaulting residents and looting property. Four people died and many more were injured or arrested.
People ran out of food. Mothers ran out of baby food. Despite appeals from local clergy the British Army refused to allow anyone to go to the shops. Máire led a march of Belfast women into the Lower Falls, with food supplies for the besieged residents. There is a famous piece of black and white film footage which shows hundreds of women proudly and defiantly marching into the lower Falls and brushing armed British soldiers aside. The curfew was broken.
In the years that followed Máire became Leas Uachtarán of Sinn Fein. She was arrested many times and was imprisoned in Armagh Women’s Prison and Mountjoy Prison. She led the campaigns against internment and the ending of political status. 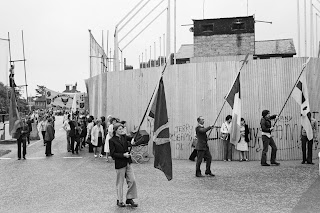 ©Gérard Harlay
Bobby Sands in the foreground carry the harp flag. Jimmy Roe in the middle and Kevin Carson on the far side. Máire can be seen on the left.
On 8th August 1976 Máire led the first big political status march in Belfast. Gérard Harley a French photographer sent Tom Hartley a large archive of photos from the 1970s. Richard McAuley scoured this archive and others for photos of Máire for the new book. To our great delight we discovered previously unrecognised photos of Bobby Sands, including one on the Andersonstown Road which clearly shows Bobby, Máire and Marie Moore with a loud hailer.
On October 28th 1976, just days after she had celebrated her 57 birthday loyalist gunman entered the Mater Hospital where she was being treated for an eye problem and shot and killed her.

On Tuesday evening at her homeplace in South Armagh we celebrated her life. We remembered the exceptional human being who in difficult and challenging times, and at great risk to herself, stepped forward to give leadership.The threats, the arrests, the periods of imprisonment never deterred Máire. Never broke her spirit or her determination to achieve an end to partition and a united Ireland. That was Máire Drumm.
The book: Máire Drumm A Visionary: A Rebel Heart is now available in the Sinn Féin bookshop and online at www.sinnFéinbookshop.com 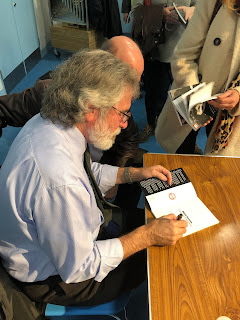