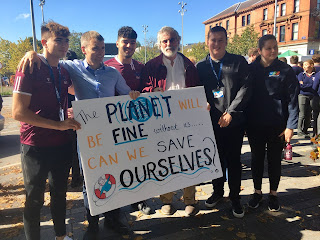 Two weeks ago the Court House Square in Dundalk was alive with the chants of young people from a variety of Dundalk secondary schools as they gave voice to their concern about the impact of climate change. They were demonstrating their fears about the future of humanity, and demanding that more is done to save the planet. These students represent the millions of young people, in scores of countries around the world, who took part in a global day of action to raise awareness about climate change. Their enthusiasm, energy, and commitment to this campaign is inspirational.

The speeches In Dundalk were thoughtful, informed, direct and a warning of the threat climate change poses to us all and to our families and the billions whose lives are already being changed every day by the damaging effects of human pollution. 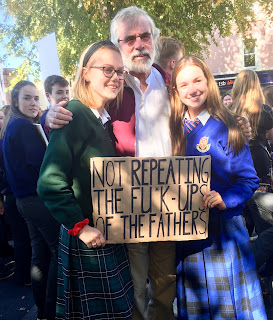 A few days later, speaking in New York at a UN climate change summit, Greta Thunberg berated the political leaders of the world for failing to honour past agreements on climate change and failing to set new urgently needed new targets for reversing the current trend toward complete climate breakdown. In a powerful and emotional speech Thunberg accused governments of failing humanity and warned of “the beginning of a mass extinction. And all you can talk about is money and fairytales of eternal economic growth. How dare you!
“For more than 30 years the science has been crystal clear. How dare you continue to look away and come here saying that you are doing enough, when the politics and solutions needed are still nowhere in sight.
“You are failing us, but the young people are starting to understand your betrayal. The eyes of all future generations are upon you and if you choose to fail us, I say: We will never forgive you.
“We will not let you get away with this. Right here, right now is where we draw the line. The world is waking up and change is coming, whether you like it or not.” 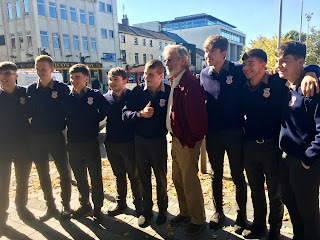 Her warnings of government failure were underlined at the UN summit by the refusal of several of the world’s worst polluters to take part in the climate summit, among them the USA and Brazil. The burning of the Brazilian Amazon rain forest – often referred to as the lungs of the planet - has been a cause of major concern in recent months. China failed to present any new proposals to tackle climate change and India made no commitment on phasing out coal.

The Science Advisory Group to UN Climate Action Summit 2019 produced a report for the UN summit – United in Science. It brings together the most recent data from the world’s six leading environmental organisations. It is an all-too depressing picture of failure by governments and increasing threats to humanity. The report found that if the world is to meet the 2015 Paris agreement goal of holding the temperature to 1.5C then current plans to cut planet-warming gases must be increased by between three and five fold. Some of its more serious warnings are:
·        2015–2019 is on track to be the warmest of any equivalent period on record.
·        Widespread and long-lasting heatwaves, record-breaking fires and other devastating events such as tropical cyclones, floods and drought have had major impacts.
·        Arctic summer sea-ice extent has declined at a rate of approximately 12% per decade during 1979-2018. The four lowest values for winter sea-ice extent occurred between 2015 and 2019.
·        The sea level is rising faster than ever before.
·        Levels of the main long-lived greenhouse gases, carbon dioxide (CO2), methane (CH4)) and nitrous oxide (N2O) have reached new highs. 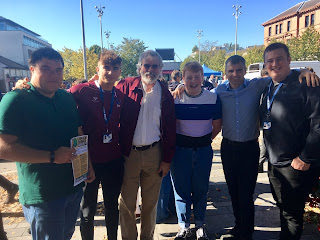 Last October the UN Intergovernmental Panel on Climate Change (IPCC) warned that we have only 12 years to limit climate change before the people of the world face extreme droughts, heat, floods, increased food insecurity and water supply, and increased poverty for hundreds of millions of citizens.
The National Biodiversity Data Centre in Waterford reports that one third of the bee species on the island of Ireland – which are essential for pollination – is either regionally extinct or vulnerable.
The evidence is overwhelming. Humanity faces greater challenges than ever before. Without resolute action millions are at risk. Failure to achieve the 1.5C rise will see many coastal areas being flooded, including Belfast and coastal towns like Dundalk. Our future, our children and grandchildren’s futures depend on the decisions we take now as a society. Moreover, any strategies to tackle climate change must be rooted in the principles of social justice and equality.
Governments, including the Irish government and the EU, need to significantly step up our climate change commitments and challenge the big polluters. Market solutions haven’t worked.  Carbon taxes don’t work. It’s also time to significantly curtail the influence of the big oil and gas companies.

Greta Thunberg has become the conscience and voice of a generation angry at the destruction of our environment. She is articulate, formidable, authoritative and a gifted speaker. She knows the science. While a plethora of international reports over recent decades, and claims by hundreds of scientists and scientific bodies, have failed to  mobilise mass demonstrations in defence of our world this teenage Swedish climate activist has succeeded in galvanising public awareness and encouraging climate activism in an unparalleled way.

She has also become the target of a vicious, shameful, often personalised campaign of hate from climate deniers fearful of her growing influence and unable to rebut the science. Speaking last week to an estimated half a million at a rally in Montreal she said that: "I guess they must feel like their world view or their interests or whatever... is threatened by us. We've become too loud for people to handle so they try to silence us ... We should also take that as a compliment."
Two weeks ago, and in the days since, young people in cities across the world have shown the way forward. Their example must guide us in the time ahead. 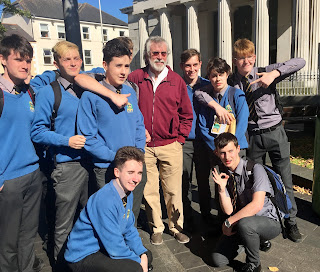