Celebrating the Champions of US Labor 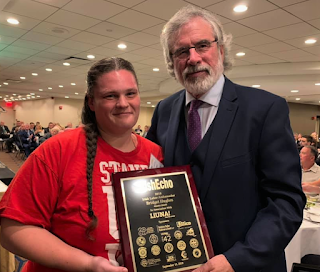 Presenting Bridget Hughes with her award

I want to thank the staff of Aer Lingus in Dublin and New York who pulled out all of the stops last week to ensure that RG and I succeeded in getting to and from New York. As regular readers will know navigating the rules and regulations that are often applied to Sinn Féin representatives travelling to America can be problematic.
Last Thursday morning, we presented our passports to the Aer Lingus desk in Dublin Airport just before 8am.  We eventually took to the air New York bound shortly after 3 pm.
25 years ago when I first visited New York on President Clinton’s 48 hour visa one of those who met me at the airport was Brian McCabe – then a detective in the NYPD. Now retired from that force Brian was at Newark to pick us up. It’s always good to see a friendly face after a long day of travelling.
The visit itself to New York was very good. It was short – just two nights. It gave me an opportunity to meet with some of the senior trade union leaders who visited Belfast in April for the opening by President Michael D Higgins of Áras Uí Chonghaile – the James Connolly Visitor Centre. However, the main purpose for travelling to New York was to speak at the ninth annual Irish Echo Labor Awards. They are a celebration of the hard work of Trade Unions in North America and of Labor activists in improving the working and living conditions of their members.
All of the honourees are ordinary people who in the course of their work have provided leadership and inspiration to others. One honouree was so nervous that he had difficulty reading his note. He was given a rousing reception. Another, Bridget Hughes, a shift worker at McDonald’s in Kansas City gave a stirring speech about the challenges facing low paid – low wage workers. Hughes led the Stand Up Kansas City campaign which successfully secured a $15 minimum wage campaign. Hughes, 28, a mother of three, took part in civil disobedience protests in 2016 and was imprisoned for her efforts. 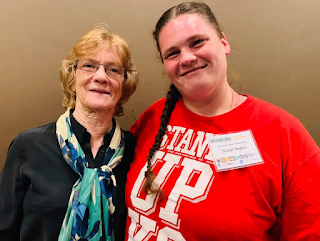 Bridget said: “If we raise wages, it puts more money in workers’ hands and that goes into the local economy. As the working class, we need to fight for vision for America. No matter if you’re white, black or brown, gay or straight, immigrant or native-born, we must come together so that we can go up together as workers. This is the new American working class identity our country so desperately needs.”
Bridget told her audience that she only read about James Connolly when she was researching for her remarks for the Echo awards. She was deeply impressed by his commitment to workers and referring to him throughout her remarks as ‘Mr. Connolly’ Bridget said: “So many of his words still ring true to me. We are trying to build a new 21st century Union movement and we have to follow Mr. Connolly’s example. It is up to ordinary people – the working class - to organise to solve working peoples’ problems.”
Speaking to Bridget afterward I told her that I hoped we could arrange for her to visit Áras Uí Chonghaile in the future.
I always come away from my visits to the USA uplifted. This visit was no exception. 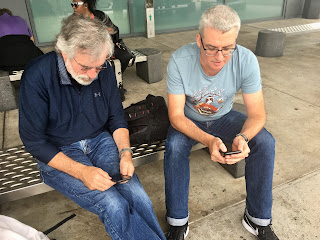 Unfortunately our flight home coincided with the all-Ireland replay between Kerry and Dublin. So, myself, RG and Ciaran sat outside Terminal 5 at JFK huddled over our mobile phones and trying to listen to the online RTE radio coverage as planes roared overhead. It was an exciting game. The five in a row Dublin team are an exceptional group of athletes. Well deserved winners and although Kerry did their best it was not to be. The best team won. Fair play to both panels of players and management.
This week sees the Houses of the Oireachtas reopening for business after the summer break. The two big issues which will dominate the political agenda over the next few weeks will be Brexit and the Budget. But those are matters for me to write about another time. In the meantime I am searching for my suitcase. As I file this column it is still missing. A victim of the dreaded SSSS my valise has gone AWOL. I’m sure it will turn up eventually. By then my laundry and especially my under garments will be rather stale. Minty!  Awh the struggle - My flight for Irish freedom - has its cost. Tiochfaidh mo mhála.
Posted by Gerry Adams at 12:00 PM