Telling it as it was - ‘Ireland’s War of Independence 1919-21: The IRAs Guerrilla Campaign’ 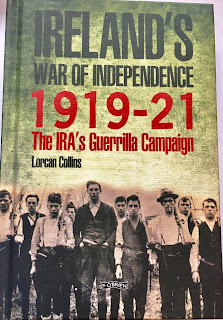 The revision of history, as new facts emerge and details or stories previously unknown are revealed, is a good and a necessary part of learning about the past. But ‘revisionism,’ which seeks to perpetuate a particular version of history by distorting, suppressing or ignoring elements of the story, usually only serves the establishment’s interests. So, it has been in Ireland for a very long time.
The history of struggle in Ireland, and in particular of the revolutionary period, has been dumbed down and distorted. This has included a significant effort to differentiate between the IRA of 1916-1923 and its actions, and the IRA after that. It also includes the notion that we have won our freedom and that the southern state is the nation and so on.
The availability of much new historical and military documents and manuscripts from the revolutionary period has broken down much of this. The digitalisation and wider availability of this new material, and the emergence of a younger cadre of historians, has opened up history and undermined the myths perpetuated by the ‘revisionist’ school. One of these historians is Lorcan Collins. 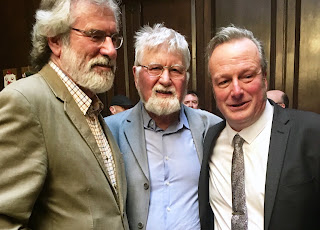 Mise agus Michael O'Brien and Lorcan Collins
A couple of weeks ago I was asked by Michael O’Brien of O’Brien Press to speak at the launch of Lorcan’s latest book - ‘Ireland’s War of Independence 1919-21: The IRAs Guerrilla Campaign’. Along with the late Shane Kenna, and the late Shane Mac Thomáis, and his father Eamonn, and the very alive Liz Gillis, Donal Fallon, Conor McNamara, Micheál MacDonnacha, Margaret Ward, Breandán Mac Suibhne, Mary McAuliffe, John O’Neill and Aengus O Snodaigh and many others, they are the alternative to the dumbing down of our history.
For over 20 years Lorcan has been running his Dublin Walking Tours, talking to visitors about the momentous events of Easter 1916, bringing them to the sites of battle, and telling them stories of the courageous men and women who took on the might of the British Empire. His knowledge of that period is amazing. Lorcan has also published a number of books, including The Easter Rising: A guide to Dublin in 1916; and 1916: The Rising Handbook. It was Lorcan who suggested to O’Brien Press that, as part of the centenary celebrations for 1916, that they publish the 16 Lives series which recounts the lives of each of the leaders executed by British after the Easter Rising. Lorcan wrote the book on James Connolly.
His latest work, ‘Ireland’s War of Independence 1919-21: The IRAs Guerrilla Campaign’ is a timely publication. It’s a nice book. It’s a handy size of a book. When you get a new book there is a feel to it, a smell to it. Lorcan’s book presents short, well researched, and insightful accounts about the major events and personalities of that period. Unlike most history books which require you start at the first page and work your way through to the end, this book is written in a style that allows the reader to dip in and out of it. To go back to it and pick it up if you have a specific interest in an aspect of the period. 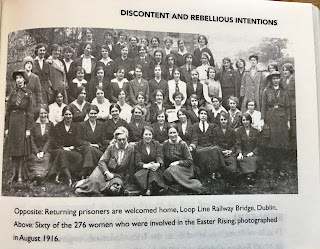 Where other historians have often diminished or simply ignored the role of women in the struggle for Independence Lorcan writes about the “Radical Women” – Inghinidhe na hÉireann, Bean na hÉireann, Cumann na mBan, and also those sisters who fought with the Irish Citizen Army.
One of the great strengths of this book is Lorcan’s ability to merge history with storytelling. The characters involved in operations against the British forces become more than just names in a history book. They are real people living and dying in a very dangerous time in our history.
Lorcan recalls the story of British Army Captain Percival Lea-Wilson. He subjected the GPO Garrison, after they surrendered to savage abuse. Wilson is said to have been especially vicious toward Tom Clarke and Seán MacDiarmada. Lorcan tells how Liam Tobin who had witnessed Wilson’s savagery “registered a vow” to “deal with him at some time in the future.”
Four years later Wilson was a District Inspector for Gorey in Wexford. Liam Tobin was now Michael Collins’s Chief of Intelligence and in June 1920 he travelled to Wexford where he ambushed and killed Wilson. War can be a deeply personal business. 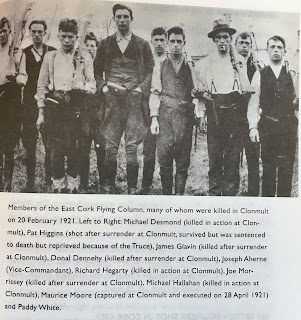 There are many stories of daring raids on RIC barracks; executions by the ‘Squad’ of British agents and spies; including the targeting of the Cairo Gang, and then the British retaliation later that day in Croke Park.
Reading the book I came across an aspect to these two incidents I wasn’t aware of before. In a little section under ‘House of Commons Reaction’ Lorcan tells us how the Secretary of State for Ireland Hamar Greenwood read through the list of the dead British agents to a packed British Commons.
Lorcan describes Greenwood; “pausing slowly for effect and whipping the House into a frenzy with the use of phrases such as ‘possible a hammer was used as well as shots to finish off this gallant officer.’ After much discussion and calls for further powers to be extended to the military and police, Joe Devlin, the Irish Party MP for the Falls Road area of Belfast, rose to ask Lloyd George and Greenwood why there had been no mention of the killings in Croke Park. There were shouts of ‘sit down’ from hundreds of MPs, and Greenwood whispered something to his fellow MP, Major John Molson, who lunged at Devlin, grabbing him by the neck and pulling him over the bench, egged on by shouts of ‘kill him, kill him’ from MPs.”
So, the madness of Brexit didn’t just appear out of thin air. 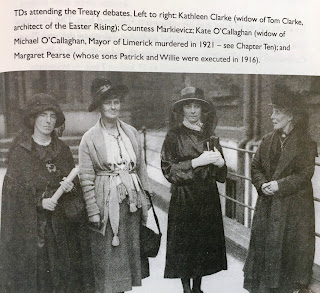 Another of the many stories Lorcan relates is that of Kevin Barry. Most of us know that Barry – a lad of eighteen summers – was hanged by the British. What is less well known are the two attempts by the IRA to rescue Barry. One of these involved a plan to blow a hole in the wall of Mountjoy Prison and rush the armed British guards. It was called off because too many people arrived outside the prison to pray for Kevin Barry as he awaited his fate.
The song of his death has been sung many times by many people including Leonard Cohen, Paul Robeson, the Clancy Brothers and most recently by Boy George. Pól Mac Adaim sang it as Lorcan’s book launch. Most of us will have sang it at some point in our own lives. It captures the heroism and tragedy of the struggle for Irish freedom.
So does ‘Ireland’s War of Independence 1919-21: The IRAs Guerrilla Campaign’. It tells it as it was. 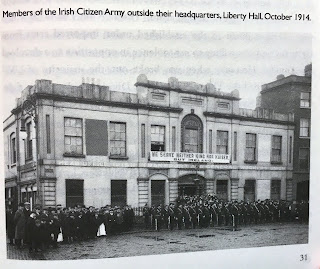