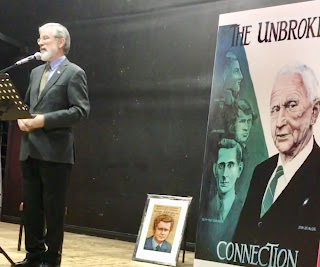 The rain wasn’t waiting to fall. It was bucketing, pelting, lashing and generally hammering down on the road to Ballinamore in County Leitrim on Saturday night. When we finally arrived, and despite the cold and the rain, the Ballinamore Community Centre was packed to overflowing. It was a wonderful testament to the love and affection which John Joe McGirl is still help by his local community thirty years after his death. I was there to talk about John Joe, his contribution and legacy to the struggle for freedom and independence.
My first port of call before going to the Centre was to visit the McGirl family home and pay my respect to Mrs. Bridie McGirl. She and John Joe were married in 1951 and had five children Liam, Áine, Cait, Feargal and Nuala. Given the frequency of John Joe’s periods in prison Bridie did a great job of rearing the children. She will 91 on Christmas Eve – Lá breithe shona Bridie.
As well as being Vice President of Sinn Féin, an former POW and a republican activist for decades, John Joe also had a long connection with Belfast. He had the distinction of being in two different prisons when both were set on fire by Republican POWs. The first time was in the notorious Curragh in December 1940 where he was savagely beaten. The second time was Long Kesh in 1974. John Joe had travelled to Belfast at Easter 1974 to give the Easter Commemoration speech. The Brits thought he was Seamus Twomey and he was arrested. When they discovered their mistake John Joe was sent to the internee end of the Long Kesh camp. 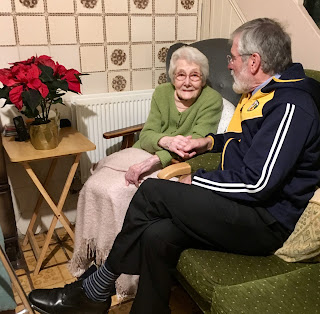 Mrs. McGirl 91 on Christmas Eve
When he arrived all us internees thought – poor oul John Joe – we all felt so sorry for him. But there was no sadness or despair in John Joe. He had been down this road so many times before. Later in October that year the republican POWs burned Long Kesh to the ground. There was a fierce series of running battles through the night and the following morning in different parts of the camp between the Republican POWs and the British Army. In the midst of this John Joe was hit in the face by a rubber bullet. If my recollection is right his jaw was fractured. As flames licked around the watch-towers I made my way to John Joe and asked how he was. His response – “I’m alright as long as you people are alright”.
Speaking later about his time in Long Kesh John Joe said: “I spent nine months there…I saw young men fight hand to hand with British soldiers. I know what it means to be kicked, beaten, gassed, made to sleep in a blanket under a sheet of iron in the month of October. I was glad to join this new generation in writing their chapter in the fight for independence. I am proud to say of them – that no generation has produced braver or better”.
John Joe’s entire adult life was a reflection of the years of republican struggle through the 1930s, 40’s, 50’s, 60’s, 70’s and 80’s. Five decades of selfless commitment to the struggle for Irish freedom and independence. He was the ‘unbreakable Fenian’, the ‘gentle soldier’.
John Joe never wavered in his commitment. He played a key role in all of the great decisions that republicans were to take in the following decades. He was there when all of the great efforts to reorganise and to mobilise and to advance the struggle for freedom were undertaken.
I had the great honour and privilege to meet John Joe first in the late 1960s. I got the bus from Belfast to Enniskillen one Friday evening and hitch-hiked to Ballinamore. I slept in a field in my trusty sleeping bag and I landed in here on a Saturday morning. John Joe brought me to Sliabh an Iarainn, to Lough Allen and to Drumshambo. I remember the coal miners in Arigna where on strike and we attended one of their meetings. The year after that I spent a few weeks camping on the shores of Lough Allen outside Drumshambo.
After the pogroms of 1969 against nationalist areas of Belfast John Joe was among those who took a stand in support of the nationalist people of the North. He threw his body and soul into providing support and help.
Later during the 1981 hunger strike John Joe travelled the length and breadth of the state rallying support for the hunger strikers. In the June 1981 general election Ciaran Doherty and Paddy Agnew were elected as TDs. Joe McDonnell came close to taking a seat in Sligo Leitrim. Despite the risk of arrest John Joe attended his funeral in Belfast. He gave the oration at Joe’s graveside in Milltown. He said: “Joe McDonnell died rather than debase the cause he served, rather than live with the forced tag of criminality on him… We will build Joe McDonnell a memorial… that will be the freedom and the unity of the Irish people.”
In 1986 John Joe seconded the motion calling for an end to the abstentionist policy towards Leinster House. As a former abstentionist TD it was a big decision for him to take. It was for him a necessary step if, in his words, “we are not going to hand down this struggle to another generation”. 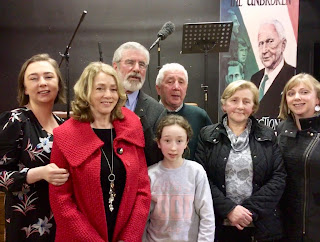 With some of John Joe's family
Thirty years ago John Joe had been ill for a time and I called to see him and Mrs. McGirl. I was on my own. He asked me to take him to Garadice Lough. After I was fed and watered I drove him there. It was a bright sunny late summers day. John Joe sat with me by the lough. At one point he actually took off his shirt. I remember he was wearing a white simmet. He really enjoyed the sun on his bare arms and face. He knew he was dying.
He said he was sorry he wouldn’t live to see Ireland united but he felt great progress had been made and that he was glad to be part of that. On the way back here to Ballinamore he said he had great confidence for the future.
Martin McGuinness like me loved John Joe. In a tribute to him Martin described John Joe as a “progressive thinker, always prepared to consider, support and propose new ways for the Republican Movement to advance. He wasn’t prepared to stand still or hold to old outdated tactics which were incapable of developing the struggle on all fronts… He was an extraordinary man, an inspiration to everyone who knew him. We treasure his memory”.
Posted by Gerry Adams at 9:22 AM