We need a new Union 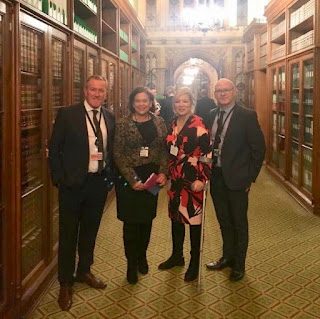 Conor Murphy, Mary Lou McDonald, Michelle O'Neill and Paul Maskey in London for meeting with British Prime Minister Theresa May. They told her there has to be a unity referendum
We need a new union
Captain Jack Doyle in Sean O’Casey’s “Juno and the Paycock” has a word for it – ‘chassis.’ He says: “I’m telling you … Joxer …th’ whole worl’s … in a terr … ible state o’ … chassis.”
Last week, Denis Naughten the Minister for Communications in the Irish government resigned in bad temper. His decision was as a result of accusations of inappropriate meetings he had held with a businessman who now leads the only bid still in place for a billion-euro state contract to supply broadband to half a million rural homes. It was a grievous blow to the Fine Gael minority government which depends on a confidence and supply agreement with Fianna Fáil. With Fianna Fáil committed to abstain in key votes An Taoiseach Leo Varadkar needs 57 votes in the Dáil to sustain his government and pass legislation.
Naughten’s resignation and the recent departure of another Fine Gael TD Peter Fitzpatrick, meant that the government had only 55 reliable votes. It has again achieved the 57 figure following commitments from Independent TDs Noel Grealish and Michael Lowry. Lowry, is a previous Fine Gael Minister for Communications who was heavily criticised in the report of the Moriarty Tribunal which was published in 2011. Moriarty was set up to investigate payments to politicians and the sale of the state’s second mobile phone licence to Esat, a consortium led by Denis O’Brien.
In the final report of the Moriarty Tribunal Lowry was accused of having “provided substantive information to Denis O’Brien, of significant value and assistance to him in securing the licence”, that he “conferred a benefit on Mr. Denis O’Brien, a person who made payments to Mr. Lowry” which according to the Tribunal “not only influenced but delivered the result” when ESAT won the mobile phone licence.
How would O’Casey describe the irony of a Fine Gael minority government losing one Minister for Communications over questions about his handling of a billion-euro contract now being dependent for its survival on the vote of a previous Fine Gael Minister for Communications who was accused by Moriarty of “cynical and venal abuse of office” and of attempting to influence a contract in a way that was “profoundly corrupt to a degree that was nothing short of breathtaking”?
The question most commentators are now asking is when will the general election take place? The speculation among the political commentators is of a spring election. Who knows? Who can tell?
But chassis is not limited to the south. There is no power sharing government in the north. The DUP failed that test. They will fail the Brexit test also. Perhaps more than any other word chassis describes the chaos that is Brexit.
In the middle of this mess is Arlene Foster. Foster’s stated view that a no-deal outcome is better than a deal which sees the north stay within the EU Customs Union, and her vehement opposition to any backstop agreement which protects the north’s agricultural sector and economy, have left the people of the island of Ireland facing the real possibility of a hard economic border.
It is little wonder that Brexit and the current political crises have together generated increasing interest in and support for a united Ireland. While it is always necessary to apply a health warning when looking at opinion polls nonetheless the consistent pattern of recent polls is indicative of a trend. At the weekend the Paddy Power/Red C poll concluded that a majority of people in the south – 61% - would like to see a United Ireland emerging out of Brexit. This percentage has remained largely consistent over recent polls.
Another poll published during the Tory Party conference by the Centre on Constitutional Change, which is based in Edinburgh University, caught the media attention in the north because it claimed that “87% of (overwhelmingly unionists) leave voters in Northern Ireland see the collapse of the peace process as an acceptable price for Brexit.”
What went largely unreported was the fact that in this poll 77% of Conservative voters thought Brexit would be worthwhile even if it led to Scottish Independence and to the collapse of the peace process. Professor Richard Wyn Jones from Cardiff University said that; “The bonds that have tied the union together have frayed to such an extent that, frankly it’s hard to imagine that the proposed festival of ‘national renewal’ is going to do anything more than emphasise the extent to which we continue to drift apart.”
English nationalism is asserting itself. The North and Scotland are of lesser concern than securing the end of the union with Europe. The jingoism of Rees Mogg, of Boris Johnson, David Davis and others who obsess over the glory days of Empire, when the sun never set on Britain’s occupied colonial territories, is straining the boundaries of Britain’s disunited Kingdom.
All of this underpins the accuracy of the Irish republican analysis over two centuries of struggle. We need a new union. As Tone described it “a cordial union among all the people of Ireland, to maintain that balance which is essential to the preservation of our liberties and the extension of our commerce.” Whatever happens with Brexit that has to remain our focus and endeavour in the time ahead otherwise chassis will continue to be a way of life.