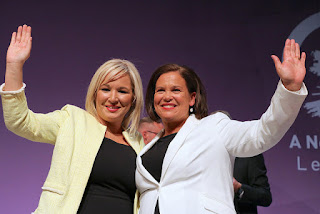 I have been attending Sinn Féin Ard Fheiseanna for over 50 years. For thirty-five or so of these years I have delivered the Presidential address. For a decade or so before that Ard Fheiseanna were very busy events for me. This year it was different. For the first time ever I had nothing to do. So, last weekend’s Ard Fheis was a different kind of experience.
I have been travelling to Ard Fheiseanna since I joined Sinn Féin in the mid-1960’s. At that time Sinn Féin was a banned organisation and remained so until April 1974. Thirty-five years ago this month, on 9 June 1983, I was elected by the people of west Belfast as their MP. Later that year the Ard Fheis elected me as Uachtarán Shinn Féin. That was my first Presidential speech. Under Section 31 it was banned from the television and radio in the south. For years the Ard Fheis was itself banned from municipal buildings like the Mansion House. Now the Mansion House is too small for an Ard Fheis.
For many years the speech would take up to an hour. I don’t know about the audience but I was always exhausted by the end of it. 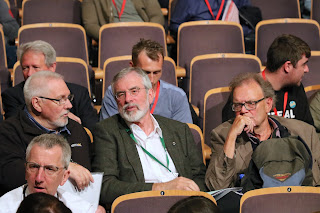 One time when RG was printing up the final draft on an Amstrad printer and it broke down. So I started my speech with only the first half of the script, while RG laboured back stage to print up the second part. What he didn’t know was that I tipped off the assembled comrades that he would be arriving– I hoped – entering stage left - before I ran out of words. He did so to tumultuous applause.
In 1994 Section 31 was scrapped and RTE could broadcast the presidential speech. Some years later we decided to opt for the thirty-minute slot on RTE between 8.30 and 9 pm. That meant reducing the speech into an even tighter timeframe. And it was live. So, no room for mistakes.
On the Friday before the speech was to be given it was handed over to RTE, with a strict embargo, so that Diarmuid O’Grady, the autocue controller, could set it up. RG, Dawn Doyle, and others would then sit in their comfortable seats while I would address an empty hall – going through the speech, stopping and starting as we would decide that this or that word, or phrase, was more appropriate, or easier to say, or made a sharper political point. 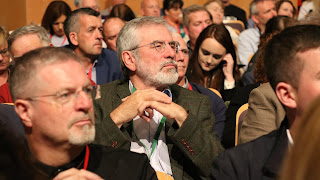 Time was critical. One minute was allocated to whoever was doing the introduction. That meant they had 150 words – no more – no less. Of course, republicans being natural wafflers – I mean rebels - it didn’t always work out like that. And then there was the applause. The applause as you walked on and the applause points in the speech. All of that took time.
So, although the time slot was 30 minutes the actual speech would normally have to come in around 24-25 minutes. The sensible advice from RTE was always to finish at least a minute before they had to leave the Ard Fheis for the 9pm RTE main evening news. Of course if you didn’t finish on time you could get cut-off in mid-sentence – that would be embarrassing.
The first time before we did a live broadcast the RTE man explained and demonstrated how he would signal to me to slow down or quicken up. The problem was once I started speaking I forgot which signal was which.
One year, I think it was in Killarney, we ran so far over time that I had to scrap the last couple of pages of the speech and adlib my way to the conclusion. It worked but I could see RG and Diarmuid desperately trying to find where I was on the script. Is it any wonder that every year, without fail, as soon as the speech was over I found a quiet corner, stripped off my shirt which would be soaked with sweat, quickly towelled off, and changed into a clean shirt.
I was mindful of some of this on Saturday night as I sat between Tom Hartley and Ruairí Ó Murchú and watched a very relaxed Mary Lou come on to the stage following her introduction by John Finucane. She casually followed him across the stage to give him a big hug and then walked back to stand at the podium as she received a huge bualla bós. Mary Lou looked like she had all the time in the world. 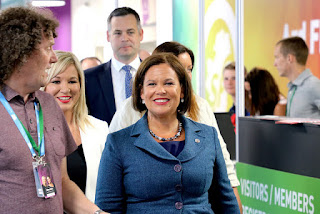 Her speech was measured, carefully crafted and dealt with all the big themes– the rights of citizens – of women in the north –the housing and health crisis –a united Ireland –engaging with unionist leaders –restoring the political institutions - Sinn Féin in government north and south – the British and Irish governments convening the Intergovernmental Conference – Brexit – and much more.
It was an excellent speech, passionately delivered.
As it came close to five minutes to nine I could see an agitated Ken O’Connell and Darren O’Keefe, beside Diarmuid on the autocue, urgently thumbing through hard copies of Mary Lou’s remarks. A good speech means more applause – and there had been lots of applause. The clock was ticking down. They had to lose words – but which words? To those in the hall and watching at home, or on the internet, it all looked seamless. Mary Lou never missed a beat. The standing ovation was richly deserved. The Ard Fheis was over. And I could go home without having to change my shirt. Well done Mary Lou. 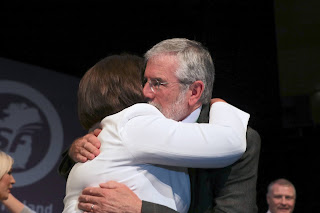