Progressives and democrats must organise for unity 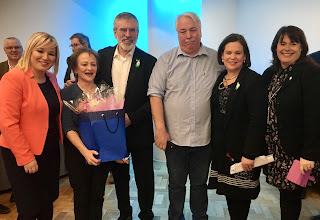 Progressives and democrats must organise for unity

Saturday morning started bright and early. A 7.10 flight brought RG and I to Heathrow Airport where a smiling Ray, one of the stalwarts of the Irish community in London over many years, picked us up. Sinn Féin was holding a one day conference on the theme of ‘After Brexit – the prospects for a United Ireland’. We met up with Mary Lou McDonald and Michelle O’Neill at a hotel just across from the British Parliament and then headed to the Congress Centre.

The conference was excellent and well attended. The two panels were very good. The discussion ranged across key themes including the likely impact of Brexit on the island of Ireland, British government policy on Brexit and the border, the importance of the Good Friday Agreement, our relationship with political and civic unionism, the strategies we need to achieve a united Ireland, and Sinn Féin’s vision for the kind of Ireland we want to build.

The starting point for Irish republicans in developing strategies to challenge these issues is our belief that it is impossible to properly understand the island of Ireland, its people, politics and society, unless you set it in the context of the long history of the English occupation, colonisation and partition of the island. The island of Ireland today has been and continues to be shaped by these events and by British government policy. That policy is inevitably determined by what is in British national interests not in the interests of the people of our island.
The current alliance at Westminster between the Conservative Party and the DUP is an example of this. For its own narrow, party political selfish reasons and in an effort to stay in power, Theresa May’s government has actively encouraged the most negative, regressive, intransigent and sectarian elements of political unionism to attack and undermine the Good Friday Agreement. She is collaborating with the DUP to deny citizens our rights.
In addition, right wing politicians in Britain and ardent Brexiteers, from former British Secretary of State Owen Patterson, to Labour MP Kate Hoey, to Tory MEP Daniel Hannan have all attacked the Good Friday Agreement which they claim has failed. British national interests, in their view and in this instance a hard Brexit, trump Ireland’s interests. They are being facilitated in their rhetoric by the Tory party leadership. 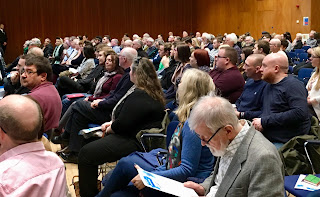 No one who knows anything of Irish history will be surprised by this. This is the historical record of Britain’s relationship with Ireland and its disgraceful exploitation of the fears of those who came as planters four centuries ago. The connection between the Tories and Irish unionism can be traced back to early nineteenth century when an alliance between the Orange Order and the Tories, which opposed Catholic Emancipation, secured two seats in the 1832 Westminster election.

The unionists celebrated their victory by attacking Catholics in Belfast. The Northern Whig reported how one prominent Orangeman speaking from the window of the Tories’ Committee room said: “Mr. Boyce … flourished a staff exultingly, and told them that the Protestants had gained this victory, and that they would continue to maintain their ascendancy: they had trodden down their enemies, and they would keep them down…”

The Orange Order declined in the mid nineteenth century. But it was given a violent lease of life with a new alliance with Tory leader Randolph Churchill’s. His visit in February 1886 saw an outbreak of widespread sectarian violence in Belfast. Churchill told a packed Ulster Hall in Belfast; “I am of the opinion that the struggle is not likely to remain within the lines of what we are accustomed to look up as constitutional action …”

Later, in an open letter in the Pall Mall Gazette he provided unionists with their war cry in the years ahead. Churchill wrote: “If political parties and political leaders …should… hand over coldly … the lives and liberties of the loyalists of Ireland to their hereditary and most bitter foes, make no doubt on this point – Ulster will not be a consenting party; Ulster at the proper moment will resort to the supreme arbitrament of force; Ulster will fight, Ulster will be right …”

The Tory stance was dictated by a belief in the British Empire and a desire to use the issue of Ireland as a means of defeating the Liberal governments of Gladstone and take power.

The Tories and the unionists did the same less than 40 years later when they threated civil war in order to achieve partition. When it was over and the northern state had been created, the then leader of unionism Edward Carson, speaking in 1921, on the Tory intrigues that had led him on a course that would partition Ireland said: “What a fool I was. I was only a puppet, and so was Ulster, and so was Ireland, in that political game that was to get the Conservative party into power.”

The Tories and the unionist leaders are at it again today. They want to turn back the clock to the bad old days of unionist domination. So, what should the response of progressives and democrats, particularly in Britain, be to this, and to the threat to the Good Friday Agreement? The first step should be for unity of purpose in defending the Good Friday Agreement and ensuring that all aspects of the Agreement are implemented in full.

Last Saturday’s conference majored on the two big issues which must be resolved if partition is to be ended. One is the need for the rest of us and the unionists to become friends or at least to be tolerant and respectful toward each other. The second issue is for a British government to embrace Irish unity and to see it as in Britain’s national interest. Both these matters are interconnected.

Some commentators speculate endlessly about why the British government remains in Ireland or about why it would love to leave. I see no evidence of it wanting to leave. If it did it would but very few states willingly give up territory. The British government supports the union but it is obliged to end it if what is what the people in Ireland vote for. 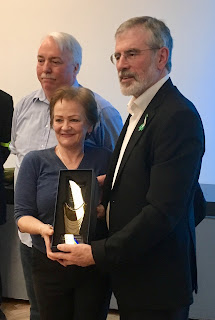 That is why progressives in England must organise to bring this about. In the past such demands for justice for Ireland or on Irish issues made a considerable impact on political and public opinion.

The advent of the Good Friday Agreement and the success of the peace process understandably removed many of these issues from the public agenda. The war in Iraq. The Middle East. Syria. Other important issues filled the space. Brexit has changed that and Saturday’s conference provided ample proof of that.

Sinn Féin believes that the demographic and political changes that have and are taking place require a referendum on Irish unity to take place within the next five years. The responsibility of progressives and democrats in Ireland, in Britain, in the USA and elsewhere must be to campaign to secure a date for such a referendum and then it is up to progressives in Ireland to devise the means to win it.

After almost 100 years of a failed partitionist system and centuries of British involvement in Irish affairs, it is time for the Irish people, all of us on the island of Ireland, to shape out our own future.

We done to everyone involved with the London conference for creating a forum to discuss this. 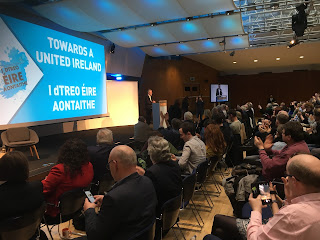