The road we are on 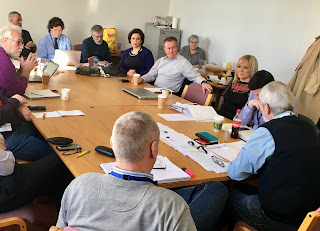 Some of the negotiating team hard at work

I was at most of the engagements with the DUP leadership for over a fortnight before the Special Ard Fheis on February 10. As is now widely accepted Mary Lou, Michelle and the rest of our team reached a draft agreement with them to restore the political institutions. There were still some matters to be signed off on but essentially we had reached that point in a negotiation where it was make your mind up time. That was before the Ard Fheis. The DUP Leader went off to consult with her party. A few days later she pulled the plug.
Gregory Campbell, the sole DUP representative sent out to defend his party, made a big deal of the Ard Fheis and my stepping down as Uachtarán. We were looking for a wee going away present for me he told BBC's The View. Not so. I had signalled up the Ard Fheis to Arlene Foster as a big event over a week before. Given the progress we were making I didn't want her blindsided.  Both Mary Lou and I told her we didn’t need a deal to make it a positive gig for republicans. It was going to be a great event in any case. And it was.
He won’t thank me for saying so but I felt sorry for Gregory on The View. Mark Carruthers filleted him. I thought Gregory was very loyal to his leader. The problem was he wasn't at any of the negotiations with the rest of us. He was out sick. So he didn't know what he was talking about. But unlike the rest of the DUP MPs at least Gregory made himself available for interview.
In many ways that interview was a disturbing insight in the state of unionism. It was a disappointing conclusion to a long and protracted negotiation. Of course, it is not the end. The shutter has been pulled down on this phase of talks but ultimately all of the parties, Sinn Féin, Alliance, SDLP and the UUP and DUP, along with the two governments, will at some point in the time ahead be back around the same table, negotiating. This is the road the DUP is on. No matter about its starting point this is where it ends up.
100 years ago it was all very different. The Ulster Unionist Party was top dog. Its alliance with the British Tory party had succeeded in imposing partition. During the following 50 years the UUP shaped and moulded the northern state into a sectarian, corrupt apartheid system in which Catholics were denied jobs, homes, and the vote, and repression was widespread.
Whether in local government or in the Stormont Parliament the voice of northern nationalists was largely silenced. We were less than second class. Our values and traditions were denigrated. From the sixties on every so often a Unionist leader would make some faltering effort to bring in limited reforms. More extreme elements saw them off. First it was Terence O Neill. Ian Paisley was the emerging leader of Unionist reaction. 'O Neill must go' he declared. So he did. Chichester Clarke followed. The next to go was Brian Faulkner. He did a deal. Paisley joined forces with the unionist paramilitaries and brought it down.
When Sinn Féin first entered local councils UUP and DUP Councillors combined to prevent our Councillors from exercising any influence. Special committees were established to keep us out of the decision making process. Sinn Féin Councillors were shouted down. Bugles, whistles and fog horns were used to drown out their voices. Unionists sprayed Alex Maskey with perfume to get rid of his smell. Other Councillors, like John Davey, Bernard O’Hagan and Eddie Fullerton were killed, as were almost 20 party activists and family members.
There were many ups and downs. Unionism was 'led' by James Molyneaux. He was a do nothing man. James and Ian Paisley became partners of sorts. They were against everything that seemed like reform. But James' successors were having to respond to a series of republican initiatives. One day David Trimble and Ian Paisley were dancing a merry little triumphalistic jig on Garvaghy Road. Not long afterwards David was signing up to the Good Friday Agreement. That was the road he was on this time.
Efforts to build peace were on-going. The Good Friday Agreement was the high point of this. That agreement was built on an ethos of equality, parity of esteem and the sharing of power and responsibility within all-Ireland based institutions. David Trimble, as Leader of the UUP and most of his team did not willingly embrace these concepts. They resisted signing up to the agreement right up until just hours before it went public. But they knew if they wanted power then they had to sign on. That was road they were on.
I have always believed that Mr Trimble was intellectually in favour of the agreement. But he was never emotionally comfortable with it and all the other reaching out efforts it demanded of him. And Ian Paisley never gave him a minute’s respite.
For nationalists and republicans, the focus since then has been on implementing agreements. For the leaderships of the UUP and later the DUP the objective has been to minimise change, to delay and dilute the potential for progress. Ian Paisley and Martin McGuinness partnership was undoubtedly the high point of the Northern Assembly. How Ian ended up in that position is a story for another day. But that too was the road he was on. Then he too was removed.
As the years have passed the hostility of political unionism toward change has sharpened. It feels threatened by the significant democratic and demographic changes that have been taking place. This has been most evident in the declining numbers of those in the 2011 census who identified as British, as against those who identified as Irish.

In last year’s Assembly election, for the first time since partition, the UUP and DUP won less than half of the Assembly seats. But change is also obvious in the Catholic experience of religious discrimination in employment. Catholics were once two and a half times more likely to be unemployed than their Protestant neighbours, and more likely to be found in the unskilled and labour market. Today that is almost gone.
However, the prejudices and the mindsets that gave rise to the sectarian pogroms of the nineteenth century, to partition in 1920, and which constructed the North’s apartheid state, still shape the words and the actions of some in political unionism in 2018. The antipathy toward the Irish Language and the insulting language used about it is a case in point.
The reality is that the vast majority of nationalists in the North do not speak Irish. But in the face of unionist intransigence and discourteous and abusive remarks by some unionist leaders, the Irish Language has become the touchstone for change – the acid test for equality.
The accommodation reached by the DUP and Sinn Fein would have sorted most of this out. But the DUP Leader did not get the support of her party.
Embracing Brexit is also part of this negative approach by the DUP. They believe that membership of the EU has facilitated the process of change – especially in respect of the all-island economy. They hope that Brexit will halt this. They are prepared to tolerate the damaging consequences for border communities, for our agri-food sector and agriculture, for our small businesses and our ability to attract overseas investment, if it means they can halt the momentum toward building a shared inclusive society.
But this is all short-termism. Like its dalliance with the Tories in London this is not a tenable long term strategy for the DUP. Their more long-sighted members know this.  They know the road they need to be on. The problem is they may be incapable of finding their way on to that road. At least for now.