Time to plan for Unity 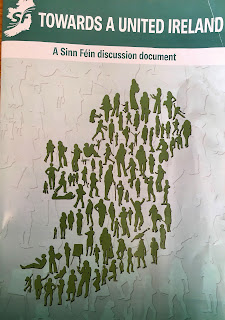 Last year’s centenary of 1916 was a resounding success. Political, cultural, historical and media organisations, individuals and communities held hugely successful events to celebrate the individuals and the organisations that participated in the Rising. There was lots of music, some excellent exhibitions and interesting debates.

The Irish government, which had initially produced a very inadequate and underwhelming programme, went back to the drawing board after ferocious criticism and came up with some very good events. However, official Ireland studiously avoided the issue of partition, its impact on the island and the need for Irish unity.

For Irish republicans this was at the heart of all that we did in Ireland and across the globe, particularly in North America and Britain. The Republic that was envisaged by the leaders of 1916 and by the Proclamation is at the core of our political beliefs. It is the rock upon which our politics and policies are constructed.

Making these policies work requires the building of significant and active support allied to strategies, tactics and programmes of work.
That is why I welcomed the publication in November 2015 of the academic paper by Professor Kurt Huebner of Vancouver University which is titled ‘Modeling Irish Unification’. It presented three unification scenarios, each with increasingly positive economic benefits for both the north and south of Ireland.
The authors concluded that political and economic unification would likely result in a sizable boost in economic outcomes and incomes in the North and a smaller boost in the South, with the most aggressive unification scenario estimating a boost in all island GDP of €35.6 billion Euro over eight years. That’s an increase in in each of those years of €5,500 per person north and south.
In November Sinn Féin launched ‘Towards a United Ireland’. It is a detailed discussion paper setting out the arguments for a United Ireland and which addresses the impact on the economy, on inward investment, on exports, on the health service, on the border region and much more. It takes head on the argument that the people of the North and South cannot afford a United Ireland. It takes this on and demolishes it.
What else is new? Fianna Fáil is growing a unity plan, the Taoiseach is for giving the vote to citizens outside the southern state in Presidential elections. The daffodils are blooming and the snow drops as well. Spring is springing. Again. So are Fianna Fáil and Fine Gael. For decades they have wrapped the green flag around them when it suited. When the issue of reunification is raised in the Dáil, as it is now regularly by Sinn Féin, the response from the establishment parties is usually that this is not the time to talk about it. Now Irish unity is all the rage in Leinster House.
The announcement by Micheál Martin that Fianna Fáil is to produce a White Paper on Irish unity is a welcome addition to the conversation that is necessary to inform citizens and assist progress. In 2005 Sinn Féin in the Dáil produced a Green Paper on unity. Following on from the publication of our discussion paper – Towards a United Ireland’ - last year- and following consultation with many sectors - we have been working on the production of a more advanced version of this paper.

The imminent decision by the British government to trigger Article 50 to commence the negotiations on Brexit; the Assembly election results, which saw the Unionist parties lose their Assembly majority; and the warning by the Scottish First Minister of a second Independent referendum, are the context for the current discussions on a United Ireland.

The determination of the British government to impose Brexit on the North, despite the vote of the people, underlines the undemocratic nature of partition and the unequal relationship between London and Belfast. The future constitutional position of the North lies in the hands of the people of the north and of the south. The Good Friday Agreement obliges the Irish and British governments to legislate for unity if that is the choice of the people north and south.
So times are changing and relationships are changing. The Taoiseach recently called for a ‘united Ireland’ provision to be included an any Brexit agreement. He also announced this week that the government will now hold a referendum on Irish citizens in the North and in the Diaspora having the right to vote in Presidential elections. Sinn Féin has been pressing the Irish government since the Good Friday Agreement to allow for this. Fianna Fáil voted against this in the Seánad on November 30th last.
The Taoiseach’s announcement is very welcome but the government needs to clarify quickly what this means in practice and when the referendum will be held.
The Constitutional Convention voted on this issue in September 2013. A significant majority of its members agreed to extend voting rights to Irish citizens living abroad and in the North.  In November 2015 the Joint Oireachtas Committee on European Affairs made a recommendation to extend the voting rights also, following criticism by the European Commission.
In addition, there is also the fact that under the terms of the Good Friday Agreement citizens in the North have the right to Irish citizenship. What will Brexit mean for them and their right to EU citizenship. This is one of the reasons why Sinn Féin believes that the North should have a special status within the EU.
So, that’s the battle ahead. To strategise, organise, and persuade. There is no short cut that will work. Sinn Féin’s discussion document, ‘Towards a United Ireland’ lays out the rationale for reunification in terms of the benefits to the economy, public services and reconciliation. It also looks beyond the economic benefits of unity.
The document details the type of new and united Ireland we believe can be delivered. A new Ireland built on the principles of equality and inclusion. A new Ireland with a new constitution and Bill of Rights. A new Ireland with symbols and emblems to reflect an inclusive Ireland, that includes the safeguarding of British Citizenship and recognition of the Unionist Identity.
This cannot be a rhetorical debate. There is an onus on the Irish government to plan for unity. To become the persuader for unity. To unite with the rest of us for unity. Unity for unity. To drive the process and build the maximum agreement and to secure and win a referendum on unity.
Posted by Gerry Adams at 7:10 PM