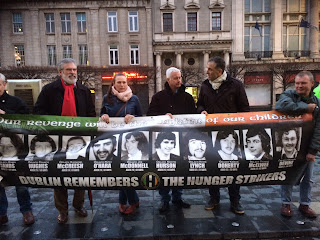 Tuesday was the 35th anniversary of the first day of Bobby Sands’s hunger strike. Much has been written about the traumatic events of that time; of the death of the hunger strikers, and the political and historical importance of the hunger strike. For many it was our 1916 – a watershed moment that changed the course of politics on this island.
It is worth recalling that in 1981 Sinn Féin had one lone MP. Bobby had been elected as a prisoner candidate MP for Fermanagh South Tyrone and on his death he was replaced by Owen Carron. Ciaran Doherty and Paddy Agnew had been elected as two prisoner TDs.
Today, Sinn Féin receives the largest vote of any party on the island of Ireland. In the north there are 29 Sinn Féin MLAs, including five Ministers in the Executive, and four MPs. Across the island we have four MEPs, and over 260 local government councillors and three Senators. Following last week’s election, and at the time of writing with the Longford–Westmeath still in play, there will be an increased Sinn Féin team of 23 TDs entering the Dáil next week.
We stand on the shoulders of others.
I want to thank everyone who voted for Sinn Féin last week. Go raibh maith agaibh also to all of our candidates and our families.
Sinn Féin went into the election with the objective to get rid of a very bad Fine Gael and Labour government. We have succeeded in that. We also set ourselves the goal of seeking a mandate to be in government. That was always going to be a challenge. 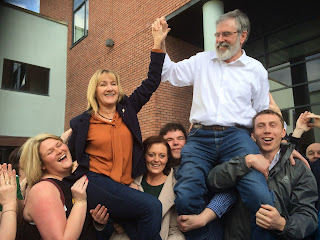 At the conclusion of some very long counts Sinn Féin has 23 seats. That’s the best result the party has achieved since 1923. We have secured a significant increase in our vote as well as in the geographical spread of the party across the state. We also secured greater numbers of transfers than ever before.
At the start of this election Sinn Féin had 14 TDs. We are now the third largest party in the 26 counties. All of our candidates did very well and some, including in Donegal, Wexford and Dublin West, hit the cross bar. We did not match our full potential at this time but we had a very good election.
Labour has suffered probably its’ worst ever election result. In 2011 Labour won 37 seats. Along the way some of their TDs jumped ship and in this election they ended with 7 TDs. In 2011 Fine Gael received 36% of the  vote and won 76 seats. This year that figure is done to 50. Which is also one less than they won in 2007.
Fianna Fáil saw a resurgence in their vote. But it is worth remembering that this election still remains the second worst election result for the party since its foundation. In 2007 Fianna Fáil commanded 42% of the vote and had 77 seats. In 2011 that dropped to 20. The extra votes and seats for Fianna Fáil were not unexpected. Despite the drubbing that party took in the 2011 election their grass roots organisation, which has been built up over decades of government, remained largely intact.
The drama of this election – of who won and who lost - has now shifted to the machinations of forming a government. Fine Gael remains the largest party on 50 seats. Fianna Fáil has 44 seats. Sinn Féin has 23 seats. Labour has 7; the Social Democrats have 3. The AAAPBP have 6; the Greens have 2; the Independent Alliance – a loose alliance of independents has 6; and then there are 17 independents.
It is a dolly mixture of parties, politics and personalities. Somehow a minimum of 79 TDs have to agree a common platform and programme for government if a new government is to be formed. Can it be done? The radio shows, the news programme and the newspaper columns are full of speculation about who will do business with whom.
All of this amounts to a sham fight between the establishment parties. However they construct their arrangement it will have no long term impact on the numbers of citizens homeless or on the housing lists or those on trolleys in the emergency departments.
Sinn Féin went into the election to provide a progressive alternative to the establishment parties. We succeeded in that. We said we would stand up for citizens and for those who have suffered most from Fine Gael/Labour and Fianna Fáil governments. We will continue to do that.
We also made it clear that we will not prop up the establishment parties that created and have sustained the crisis. That is the mandate we received. That is the mandate we will honour. Sinn Féin will not play junior partner to either Fine Gael or Fianna Fáil.
In my view none of these parties will do anything substantially different from what they have done in the past. All of the talk of Dáil reform has been heard before.
However, no one should lose sight of the fact that this election has witnessed a significant shift in the political landscape. Where once Fine Gael and Fianna Fáil reigned supreme, with Labour occasionally tugging its forelock and bolstering one or the other, their supremacy has now been further eroded. Ten years ago the two big establishment parties held 70% of the vote. Today that has dropped sharply to just under 50%.
As I write this Sinn Féin is speaking to others who have been elected; to the smaller parties and the independents, to see what common ground there is between us and whether we can agree how we collectively approach the next Dáil session. Sinn Fein, smaller parties and Independents represent almost half the electorate. Although some of these smaller parties and individuals represent a wide political spectrum this is a significant achievement.
But be in no doubt that republicans would have done marginally better but for the barrage of negative campaigning that was targeted at Sinn Féin by the establishment parties and their lackeys in the conservative press. That negativity probably cost one or two points and several seats. We also made some mistakes organisationally but every election is a learning process and it’s up to us to learn the lessons and implement them.
At the beginning of this campaign as I travelled around the constituencies I reminded everyone of Connolly’s New Year message for 1916. He said: “…opportunities are for those who seize them”. Many opportunities have now arisen as a result of this election and this will be enhanced by the Assembly election in May – we must grasp all of these with both hands.