Con Colbert: The only fitting memorial is a United Ireland 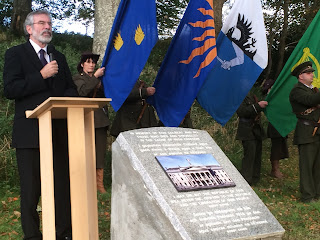 Last Saturday I travelled down to Limerick for a quick walkabout with Maurice Quinlivan and his team of Councillors and activists. It was a lovely day. Everyone was in great form and the response from those we met was positive and supportive.


And then it was on to Athea in west Limerick for the unveiling of a memorial to Con Colbert, one of the 1916 leaders executed by the British. There was an excellent turnout of local people. I want to thank the west Limerick Monument Committee and the committee of the local community centre for all of their efforts. And to the Colbert family, the colour party, Grainne and Ronan for their music and to all of those who made it happen - go raibh maith agaibh go leir.

I am very honoured to be here for the unveiling of this monument to Con Colbert and all those who have died in the cause of Irish freedom.

I want to thank the organisers for the invitation and to extend a very special welcome to those of Con Colbert's relatives who are here with us and to Con's great-niece Aida Colbert-Lennon for the unveiling.

Con Colbert was born in Moanlena, Castlemahon in 1888. He had twelve brothers and sisters and was the fourth youngest child in the family who moved to Galeview, Templeathea when Con was three.

Con’s father, Michael was a farmer. His mother, Hanora, died when his youngest sister, Brigid, was born in 1892. He attended the national school in Athea.

Con's family were republican and his father had taken part in the Fenian Rising of 1867.He left Athea at the age of 16 and went to live with his sister Catherine in Ranelagh, Dublin.Con continued his education at the Christian Brothers school in Dublin's North Richmond Street and was later employed as a clerk in the offices of Kennedy's Bakery.

Con's time outside of his day job work was entirely dedicated to the Irish republican cause. Nuair nach raibh Con ag obair bhí sé tiomanta go hiomlán don chúis Poblachtánach Éireannach.When Constance Markievicz founded Fianna Éireann in Dublin in August 1909 Con Colbert was among the first to join. He quickly won widespread respect and rose to a position of leadership.

He was a founder member of the Irish Volunteers in November 1913 and was on the National Executive the following year. He opposed John Redmond’s Irish Parliamentary Party attempt to take over the organisation. On request from Pádraig Pearse, Con instructed the boys of Scoil Éanna in drill but refused to accept payment.

Admired and trusted by the leaders of the forthcoming Rising, Con was posted as Pearse’s bodyguard in the days immediately before Easter 1916. His rank was Captain, F Company, Fourth Battalion of the Dublin Brigade, based in Inchicore.

On Easter Monday 1916, with fewer than 20 men, Con Colbert occupied Watkin’s Brewery. They moved to Jameson’s Distillery, Marrowbone Lane on Tuesday and for the rest of the week were engaged in a fierce fire-fight with British troops. They remained in place until Sunday when they were ordered to surrender by Thomas MacDonagh. It was said that Con was visibly distraught at having to lay down arms.

Con Colbert and Seán Heuston were court-martialled in Richmond Barracks and executed in Kilmainham Jail on 8th May 1916. 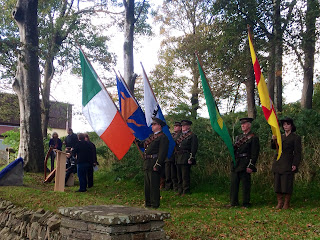 The IRA and Sinn Féin gained widespread popular support in Limerick following the repressions and executions of 1916. County Limerick went on to play a key role in the Tan War with many decisive engagements between British forces and the IRA. In every generation since that time, Limerick republicans have played their part in the struggle for a united, independent Ireland.

It is very, very important that Irish citizens remember and honour women and men like Con Colbert and I want to commend the local Committee for leading the way here in County Limerick with this monument. The 1916 Rising in which Con played such a valiant role was a proud and momentous event in the history of the Irish nation. Ócáid bhródúil chinniúnach a bhí in Éirí Amach Naoi Déag is a Sé Déag agus ghlac Con ról lárnach ann

Next year marks the hugely important 100th anniversary of the Rising.


This is a time for promoting the republican ideals of democracy and equality. It is a time for focussing on delivering a genuine republic for the people of this island. The democratic and egalitarian principles contained of the 1916  Proclamation are as urgently required in the Ireland of 2015, as they were 99 years ago.

Austerity, inequality, enforced emigration and Partition are anathema to the ideals of the Proclamation. The Proclamation remains the mission statement of modern Irish republicanism. It is a freedom charter for this whole island and all the people who live here. It is a declaration of social and economic intent for a rights-based society in which the people are sovereign.

The great challenge of the Proclamation is to unite all the people of this island, regardless of background, in equality and mutual respect. Sinn Féin’s central political aim is to deliver the type of Ireland envisaged at Easter week. Is é sprioc lárnach Shinn Féin ná Éire a thógáil mar a cuireadh chun tosaigh i seachtain na Cásca.

Today's event is a reminder, as the Centenary events will be that the business of 1916 remains unfinished. Some people in high places do not like to be reminded of that. Our country is Partitioned. We do not yet have a 32-County Republic. The Proclamation has yet to be implemented. Equality has yet to be achieved.

But we are living in a time of great change, great hope, and great potential. Irish republicanism is growing, as never before, North and South. Despite what some of our political opponents have recently tried to claim, Sinn Féin has never tried to "claim ownership of 1916".

Instead we have sought to popularise the centenary and place the message of the 1916 Proclamation at the centre of commemorative events. Some in the political establishment don't want to talk about the republican and egalitarian message of the Proclamation. This reluctance has been reflected in their approach to marking the Centenary of the Rising. From the initial shambolic launch of its commemorative programme, the Government has been playing catch-up with popular opinion.

At every stage they have sought to sanitise and de-politicise the events of Easter Week. They have refused to agree to the request from Sinn Féin for a public holiday to mark this momentous event in our history. We must be one of the few countries in the world not to have a day which is a celebration of nationhood and the sacrifices of those who struggled for independence.

But the Centenary will be marked by Irish people next year through popular events at home and abroad and Sinn Féin will be part of that. We are committed to honouring the bravery and sacrifice not just of those who took part in the Rising but in every subsequent period of republican struggle.

Today, republican objectives can be pursued peacefully and democratically thanks to the struggle sacrifice of so many people over the decades. Sinn Féin is determined to see the full implementation of the Good Friday and subsequent agreements, and a referendum on Irish unity, which will allow the people to decide the future.


As you know, the peace and political process is facing difficulties at this time.


However, Sinn Féin approaches the latest round of talks with a determination to make progress. For this to happen, the British Government needs to accept its role as a participant in the conflict. British political and economic policy towards the North has to change. And both the British and Irish governments must take their responsibilities seriously. The Taoiseach needs to make the north a political priority and not an issue for political opportunism and party politicking.

The negative political pattern which has held back political progress must be broken. Political stability, power sharing, a workable budget and dealing with the legacy of the past are central resolving the current difficulties. But let us be clear - a united Ireland and a real republic is the only fitting monument to the sacrifice of Con Colbert and all those who died in 1916 and since then in the cause of freedom. 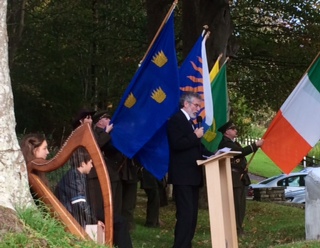