Shane MacThomais was just 46 when he died suddenly last Thursday. He took his own life and was found in Glasnevin Cemetery where he had worked off and on since he was a teenager and where he was employed for the last 14 years as the resident historian. He played a major part in its very successful refurbishment and the transformation of that historic place.
Shane was hugely popular and his walking tours of Dublin and Glasnevin were renowned. He did regular interviews on tv and radio and was the author of several books and scores of pamphlets. His last book which was published in 2012 ‘Dead Interesting – Stories from the Graveyards of Dublin’ also told the story of other Dublin cemeteries including the Huguenot graveyard.


The refurbishment of the Daniel O Connell tower, and the construction of a new staircase, was Shane’s most recent project but he was also responsible for an exhibition about to open on the 100th centenary of the Cumann na mBán. In recent years he had organised exhibitions around the centenary of the Irish Volunteers and of the Ulster Rifles. This latter saw him work closely with the UVF in Belfast.
Today a humanist service was held in the Chapel at Glasnevin cemetery for Shane. It was packed and outside hundreds more joined in celebrating the life of this outstanding republican. Speakers included his friends Conor, Lorcan, Jack, George, his sisters Orla and Maeliosa and his daughter Morgane. I was one of those asked to contribute to the service. I said:


“I was both very shocked and deeply saddened when I heard the news of Shane’s death. It had come just out of the blue. I knew Shane both personally and politically.
He was enormously entertaining and insightful about Irish history. He was also deeply passionate about history. It wasn’t something for Shane that was dry and dusty. It was in his consciousness; something very real - something that shaped his world - and shapes our world.


He brought Irish history alive to the thousands who visited Glasnevin every year and also on the streets of Dublin. He wanted to ensure that young people in particular would know their own history and be proud of it.

Shane literally lit up when he was talking about historical events. He helped to organise Sinn Féin’s Céad Bliain celebrations (100th birthday) in the Mansion House some years ago. The imagery, the exhibition all around the walls of the Mansion House were down to Shane.


I watched him during the event. He couldn’t keep still. He was quietly speaking along with the speakers, mouthing the lines of the contributors on the stage. And he was deeply engrossed in making sure that everything was done properly.


That event was a very fine and fitting tribute to the contribution played by Sinn Féin activists over 100 years of activism. It was also a very fine tribute to those who organised it and in particular of Shane.


Shane was a very committed Irish republican, like his mother Rosaleen, who suffered a lot for her beliefs, and like his father Eamonn who was also an author and a historian.


I knew Eamonn better than I knew Shane. Eamon was one of the most interesting people ever to travel anywhere across this island or anywhere across this city. Martin McGuinness was in prison with Eamonn. They were in Portlaoise for a while, and he has very fond memories of Eamonn, like a seanachaí, telling them yarns and stories and the social history of Ireland and of the ordinary people.


Shane’s last book, ‘Dead Interesting’ has a beautiful preface about this father.


He was a true Dub and a character. His passing comes very close to the anniversary of the death of another true Dub, Brendan Behan whose wit and humour and sense of history and Dublin identity Shane would have keenly appreciated and identified with.

I remember the protest at the auction of 1916 memorabilia by Sinn Féin youth. And Shane got arrested. Of all the kids that were there Shane was arrested – he was like the oldest swinger in town among all the young ones. There is also a great photo of him at another historical re-enactment in a slouched hat in, I believe the uniform of the Citizens Army. He has a great cheeky grin – that great mischievous smile of his.


Shane's death leaves a great void. He leaves a hole that can’t be filled; particularly for his daughter Morgane, for his mother Rosaleen, for sisters Orla and Maeliosa and his brother Damien and for his family, for Ruth and his wide circle of friends.


Shane encouraged people. He connected with people. When someone motivates you and encourages you and catches your interest – that’s special. We all know of the teacher who by his or her ability put us on to something that was good for us, who changed lives, who sparked a lifetime interest – that was Shane.


He will be missed, especially by his family, but also by many others will miss him too. The 1916 centenary celebrations will not be the same without Shane. He would have brought a special little something to that.


I want to finish with a little poem by Brendan Kennelly for Morgane and for Rosaleen. 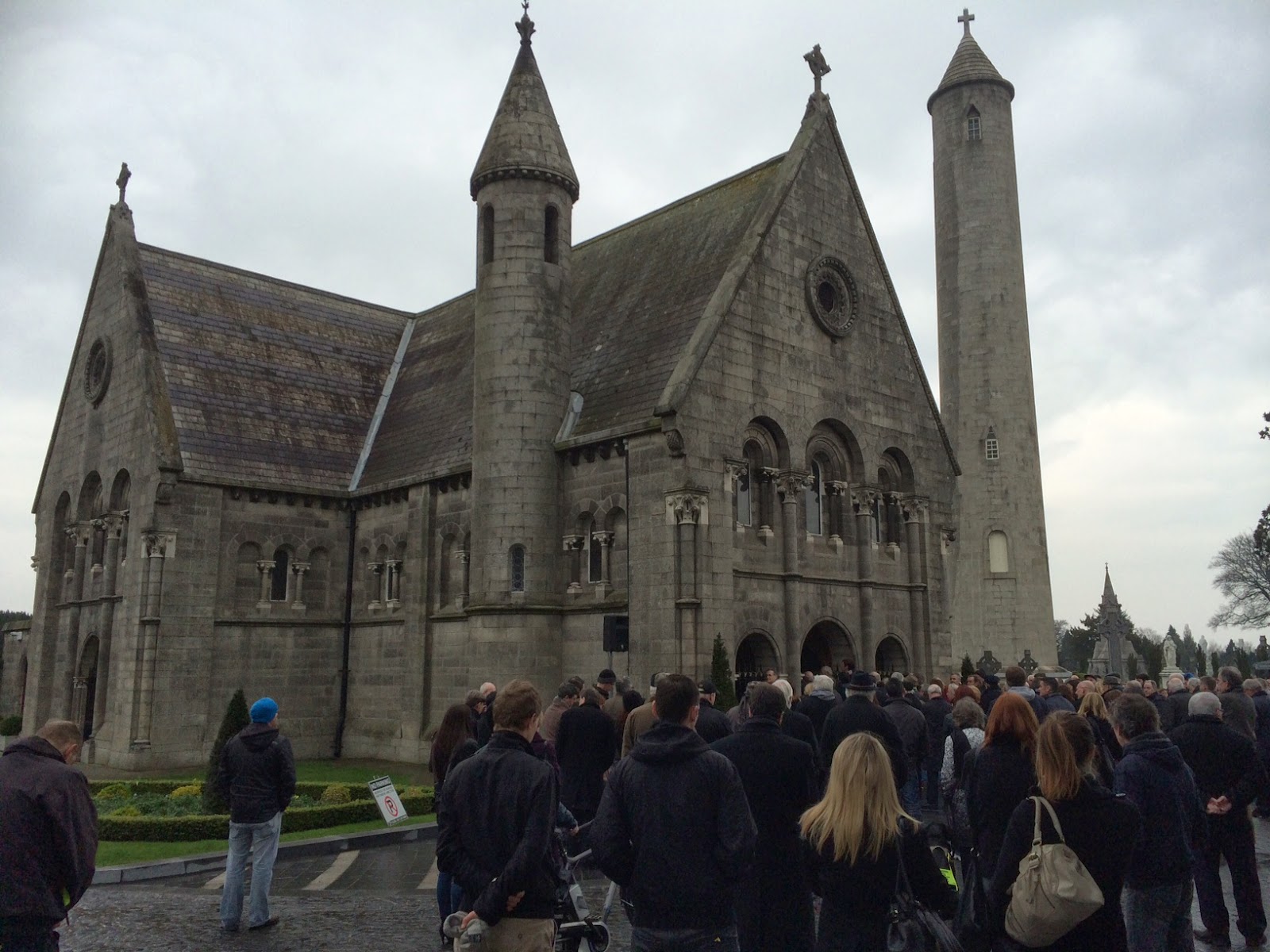 
Begin to the loneliness that cannot end


since it perhaps is what makes us begin,


begin to wonder at unknown faces


at crying birds in the sudden rain


at branches stark in the willing sunlight


at seagulls foraging for bread


at couples sharing a sunny secret


alone together while making good.


Though we live in a world that dreams of ending


that always seems about to give in


something that will not acknowledge conclusion