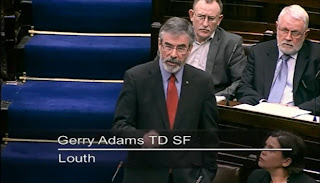 Two weeks ago the European Council met. The meeting focused on the “European Semester” and the economic priorities for the EU in 2013. It is clear, both from the economic priorities emanating from the Council and its approach to the Cyprus crisis, that the EU is wedded to the failed policies of austerity. There is nowhere the dynamism and determination needed to tackle the jobs crisis across the EU.


However it is the events in Cyprus that have dominated political and public attention in the period since that meeting.


This morning in the Dáil there was an opportunity for party leaders to speak on the Council meeting but most speakers concentrated Cyprus. It is there that we see the real dysfunction at the heart of the EU approach to the economic crisis.


The fact that the Euro Group, including Minister Noonan, would sign up to a bailout which contained a levy on bank depositors under and over €100k, while sparing Senior Bondholders in the banks, quite frankly beggars belief. That was a huge mistake by the Irish government.


In his statement this morning the Taoiseach admitted that the issue was not discussed in detail at the summit, yet the government welcomed and signed up to EU/ECB/IMF proposed bailout and levy, and European leaders then stood back over the last week and allowed Cyprus to be brought to the brink of economic collapse.


Instead of assisting the people of the island, they have bullied it and accused the Cypriot people of being the authors of their own demise. So, much for European solidarity.


We don’t see such allegations being hurled at larger European states when they get themselves in difficulty.


The revised bailout agreement means that senior bondholders will now take a hit as will deposit holders over €100,000.


While I welcome the decision not to hit deposit holders under €100,000 the reality is that the Rubicon has been crossed. International depositors looking at the mess in Cyprus may consider not just withdrawing their money from banks there, but from across the EU.


It is claimed that there are several large multinationals who reportedly withdraw their money from Eurozone banks every Friday in case something happens over the weekend – and that was before this latest crisis. So, the prevailing sense is of a European establishment making it up as it goes along.


The decision to try and hit depositors under €100,000 puts into sharp focus ECB President Mario Draghi’s statement last July that the bank will do whatever it takes to preserve the Euro.


This appears to now include hitting depositors and possibly those with under €100,000 in a bank. The government welcomed this. That was a mistake. The Cypriot Parliament rejected it but the damage was done by then.


Why should investors, especially large investors, trust the EU or ECB? Fears that bank accounts could be raided in future bailouts were given added weight by the head of the Eurozone Finance Ministers who at first suggested that the Cyprus bailout could be a template for future action and then he had to retract this.


The ECB put Cyprus under huge pressure to agree a plan by threatening to collapse its banking system. The bailout package that has now been agreed includes the increase in their corporation tax from 10% to 12.5%.


This is a sovereign state having a new tax rate imposed on it. The government claims that the EU cannot make us increase our corporation tax rate – yet the government was part of the group forcing this on Cyprus.
At the beginning of the Irish banking crisis Sinn Féin called for bondholders to be burned.


Fianna Fáil, Fine Gael and Labour told us it would never happen. They derided our approach and claimed that the EU would never let it happen, and that banks had to be bailed out at any cost.


The EU has now signed off on the burning of senior bondholders in Cypriot banks.


Last June, the Government also told us that a seismic game changer had been reached in Europe, which would see the separation of banking debt from sovereign debt. The Taoiseach told us that in future bank crises, the ESM would directly recapitalize banks and the sovereign would not be expected to take on a bank bailout.


He told us that because we had taken on this liability, we would be retrospectively recapitalized.


The EU could have committed to using the ESM to cover losses needed for the Cypriot Banks. They didn’t do this. And there is now uncertainty over the commitment to separate sovereign debt from Bank debt.


Comments over today and yesterday by some politicians cast doubt over whether the ESM will ever be used to recapitalise banks whether retrospectively or not. Yesterday the European Commission confirmed that it hopes the ESM fund will not be used for directly recapitalising banks.


This seems to confirm comments by the chief of the euro zone finance ministers Jeroen Dijsselbloem, who questioned whether the ESM bailout fund will ever be used to rescue banks directly.


There seems to be a complete U-turn in EU policy in relation to the use of the ESM and the burning of senior bondholders.


And this is a u-turn which causes real problems for citizens of this state which had this debt foisted on us by Fianna Fáil. We now have a legacy bank debt which may never be dealt with.


So, the government has serious questions to answer. What is the point of the ESM and where does Europe now stand on banking solidarity?


What is the Irish Governments attitude towards the burning of depositors in Irish/European banks and why did the Government support it in the Cypriot case?


And will the citizens of this state ever receive debt assistance for the debt this Government and the previous Government put on the shoulders of the taxpayers to bail out banks with taxpayers’ money?


Finally and prior to the European Council meeting the Taoiseach agreed to raise the Jerusalem report that had been just been made public and which was written by EU diplomats in the Middle East.


The report raised serious concerns about the actions of the Israeli government in building settlements and excluding Palestinians for their land.
The Taoiseach made no mention of that in his statement this morning or subsequently. So, I don’t know whether he did or didn’t raise the report as promised. It is a  matter I intend to return to.